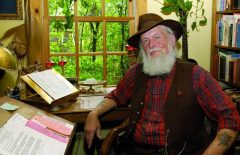 It was along about 1969 that I first became more than aware of U Utah Phillips. Now, I had heard of Bruce Phillips some time before that from an old Prestige International long-play record that I had picked up from time to time, which Rosalie Sorrels had written the notes for, and I’d seen that he was a songwriter and singer from Utah (he had a song on a old Limelighter’s LP about a mule that I’d heard). However, in 1969, or maybe it was 1970, Rosalie Sorrells was at the San Diego Folk Festival and she was singing songs written by this guy U Utah Phillips (who called himself “the Golden Voice of the Great Southwest” and “A Rumor in his Own Time”). She told me that I really ought to have him down to one of my festivals, which I did in 1970. This wasn’t the same old Bruce Phillips from the Prestige record. This was a guy who’d seen a lot of life, his own and other people’s, and had a unique way of telling you about it. I’d have to say that Utah played a major role in my own outlook toward music, politics, and what a festival should be. I didn’t always agree with him, but the ideas I got from him and the folks he led me to were always worthwhile. It was a long road Utah had traveled before I met him, which led to the performer and character San Diego audiences knew and loved.

Phillips, the son of Labor organizers, was born in 1935 (I’m not sure where). He went to Korea with the U. S. Army in the late ’40s and returned from that conflict with serious problems that face many veterans still today. However, in the ’50s they didn’t really have any apparatus that dealt with extended exposure to human misery and he returned largely a broken man, both financially and in mind and body. With little or no help from the country that sent him to war Phillips, destitute and homeless, took to the bottle and to the rails. He drifted, riding the rails, across the country for over 10 years, until he finally got off a freight in Salt Lake City and made his way to the Joe Hill House, a homeless shelter run by anarchist Ammon Hennacy, a member of the Catholic Worker Movement. The house was named after the legendary labor activist and Union songwriter for the Industrial Workers of the World (or the IWW aka Wobblies) who had been killed by Utah authorities who “framed him on a murder charge” in the early part of the last century.

Hennacy gave Bruce a job at the Joe Hill House, which led to work as an archivist for the state of Utah. I assume it was during these years he became acquainted with Sorrells and other folksingers from Utah (particularly during those years he would later dub “the Great Folk Scare of the Early ’60s”). In 1968 he ran for the U.S. Senate on the Peace and Freedom Party ticket (it’s always been a wonder to me that there were enough Peace and Freedom Party members in Utah to get him on the ballot), but of course he didn’t win. To make matters worse, Bruce was seen by the Democrats as splitting the ticket enough to get the Republicans back in, so not only was he out of a job he was also blacklisted from state government employment. So it was back to being homeless and drifting again. 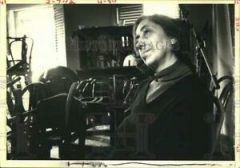 This time it was the folk community that was his contact with the real world and he wound up in Saratoga Springs, New York, courtesy of the U.S. rails, where a fine lady named Lena Spencer ran a coffeehouse (folk club) called Cafe Lena. Lena took Bruce in and gave him time and space to learn his craft (playing guitar, telling stories, generally entertaining folks while at the same time telling them things they really ought to know), and getting him in front of folks to ply it. It wasn’t long until U. Utah Phillips was born and not very long afterward that Utah played in San Diego for the first time.

Other people began to perform his songs—“Starlight on the Rails,” “Goodnight-Loving Trail,” and “Green Rolling Hills of West Virginia,” for example—but they also started performing the old Union and Wobbly songs from The Little Red Song Book, which he made a part of most every performance. A whole group of younger folk types started riding freight trains and writing songs (maybe not always for the same reasons Bruce did, but they did), and people started to record his songs (Lester Flatt and Earl Scruggs, Emmylou Harris, Tom Waits, Joe Ely, and Waylon Jennings, to name a few) along with a series of long-play records for the Philo label (all of which are still available on CD from utahphillips.org (there’s more recent stuff available too, including his long-running radio shows and recordings he made with Ani DeFranco and others. 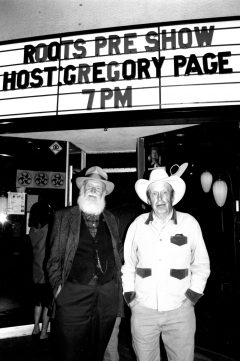 Utah Phillips played at most of those old San Diego Folk Festivals from 1970 (the fourth one) through 1985 (the 18th). Along the way he did concerts for the San Diego Folk Heritage, played the Old Time Cafe in North County, and even performed at the Railroad Museum in Campo. He returned one final time to the Adams Ave. Roots Festival in 2002. We tried to get him back other years after that, but his health wouldn’t permit it.

I carried on a correspondence with Utah off and on between his appearances here from just about 1970 on. I’d find a hobo song or tune on an old 78 and would send him a tape. He’d call or write a note telling me if he’d heard it before. I also sent him obscure comedy LPs by jokesters no one had ever heard of. His theory was that if he could get even one line off an old comedy LP then it was worth his time plowing through all the bad ones he couldn’t use. Sometimes we got a chance to talk about books, and favorite authors like Thomas Wolfe (author of Look Homeward Angel, not the The Electric Kool Aid Acid Test guy), or Jack Conroy, who wrote one of Utah’s and my Dad’s favorite books, A World to Win. Bruce was always going to find me a copy of George Milburn’s The Hobo’s Hornbook. Now, I guess that won’t happen and I’ll have to find it myself.

These last few years have been hard on him, not being able to do the work he loved to do. He had led two new generations to the songs of working-class struggles. I must admit that sometimes I was a little put off by audiences who would treat a song or story of working-class struggles like it was a joke. In 2005 Bruce wanted to make some kind of repayment for the kindnesses shown him many years prior by helping found the Hospitality House of Western Nevada County, California, a shelter for homeless men down on their luck as he once was.

Bruce “U. Utah” Phillips was a legend in the American folk music community. His music and his struggle for common folks live on. He died peacefully in his sleep at his home in Nevada City, California, on Friday, May 23 [2008]. He was 73 years old .

A Night Out at the Bostonia Ballroom