February 2023
Vol. 22, No. 5
Jazz 88 Keeps Pumping Out the Tunes: Station persists despite numerous challenges over the years, including Coronavirus by Michael J. Williams and Jim TrageserJune 2021
Examining Bob Dylan’s Love Sick Blues by Ted BurkeJune 2021
John Densmore: An Invitation to Dance on Fire by Terry RolandJune 2021
A Father’s Day Story: The Courtship of Harry Nilsson’s Son, Zak by Terry Paul RolandJune 2021
Me and Ronnie Earl by Eric LiebermanJune 2021
Lawrence Ferlinghetti: America’s Poet by Ted BurkeJune 2021
Q & A with Gabe Lapano: After the Rain and Beyond by Andy RasmussenJune 2021
Remembering Sam Hinton by Paul HomiczJune 2021
Band of Brothers: The Liggins Brothers by Bart MendozaJune 2021
A Darker Side of Donovan by Ted BurkeJune 2021
Advertisements

Jumping joints have come and gone, and many musicians and fans are jamming with the angels.
Yet, there has been one constant on the San Diego jazz scene over the last half century.

With a twist of the dial or punch of a button on their radios, or a finger tap on online devices, listeners have been able to tune in KSDS, 88.3 FM, to hear one of America’s original contributions to the world’s musical heritage. From Lionel Hampton to Hampton Hawes, from Cab Calloway to Ann Hampton Calloway, from Sonny Rollins to Sonny Stitt, from Miles Davis to Ron Miles, from the Count to the Duke, from Pops to Fatha and even Cecil Taylor to Sun Ra, connoisseurs of African-American-inspired improvisational music can catch it all on the airwaves familiarly known as Jazz 88.
“It’s the first button on my FM on both my cars,” said bassist and educator Gunnar Biggs, a mainstay of San Diego’s performance scene since the 1970s. “They are carrying the torch, for lack of a better term, for the real jazz thing. They’re keeping that in the forefront (by playing) the people that are historically necessary and also the vanguard that’s carrying the tradition forward.” 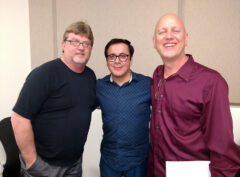 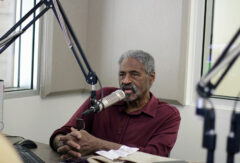 Charles McPherson in the studio. 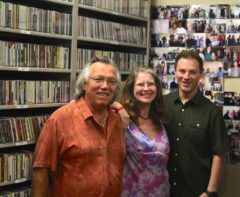 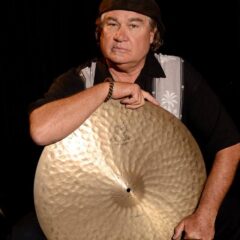 Farrar is one of those who has had an on-air presence for four decades. He was pursuing a career as a drummer when he became obsessed with learning about jazz in the 1970s. He would call into the station to participate in its album giveaway contest, whereby callers would vie for a free record by answering a jazz trivia question. One night, he said, the station was offering a 20-LP Columbia release to the first caller who knew Charlie Parker’s birth date. He called and Dhanifu answered the phone, recognized Farrar’s voice as having been a winner of previous contests and voiced skepticism about Farrar’s legitimacy as a participant.
“He got a little bit opinionated with me, but he actually said, ‘Okay, if you know so much, why don’t you come down here and get on the air?’ That was it, baby. That was 1979, and I’ve been there ever since.’”
Like most of the employees at that time, Farrar was a volunteer and had to take courses in broadcasting at City College to get on the air. In “Percussive Profiles,” which ran weekly before the coronavirus shutdown in early 2020, Farrar focused on one drummer per program and often did live interviews with the subjects.
“It’s the only all-jazz drum-focused show that I’ve seen anywhere in the world,” Farrar said. “Some people in New York interview guys and feature the music, but it’s not exclusively drummers. I have guys from all over the world that we used to interview, before Covid.”
GOING PRO
Over the years, the station evolved in funding and staffing, so it now has a paid, professional roster. Claudia Russell is one of the more recent hires: She marked her 20th year at KSDS in March.
“I was working for the public radio affiliate in Elkhart, Indiana, at the time the job came open here at KSDS,” she said. “I had never been to San Diego. I didn’t know anything about the station, but I read up on it, and learned that it was all jazz all the time, and that it was not (a National Public Radio) affiliate. That independence was attractive to me.
“These were live human beings in the studio each hour on the air presenting music, which to me is extraordinary. There are so few places that do that and that KSDS has managed to continue that model for the decades that it has is really remarkable.”
Poston is widely regarded for his vast historical knowledge of the music, especially of developments on the West Coast.
“That guy is a walking encyclopedia of jazz,” Farrar said. “This guy’s so heavy, he blows my mind.”
Farrar recalls broaching with Poston his fascination with the Stan Kenton Orchestra when the bandleader was using mellophoniums to color his arrangements.
“I go, ‘That’s my favorite part of Kenton’s work, when he started getting really progressive and had the mellophoniums,’” Farrar said. “He says, ‘Those mellophoniums are in my garage. I have every one of them.’ He’s got all the [music] books from all the bands. It’s unbelievable.”
Poston has parlayed his knowledge into projects such as a concert presentation of Kenton’s music by KSDS’s all-star orchestra led by the brilliant trumpeter Gilbert Castellanos.
But regardless of roles, with such a small staff, Russell said everyone has to pitch in as needed. “We all work really collectively here. I’m kind of the person to contact with additional promotional ideas and concepts, but we have a tight group here and we work pretty collectively to make things happen.”
JAZZ LIVE 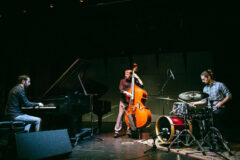 The Kenton retrospective was part of the station’s ongoing Jazz Live series, which occurred one Tuesday a month until the pandemic hit.
While providing a performance platform for musicians, the principal impetus for the series, launched in 1977 by Scott Harrison and Jackson Ratliff, was to teach live audio production to City College students.
Hildebrand, who began teaching the Jazz Live class and producing the concerts in 1981, said the broadcasts originally occurred in a classroom. “We called it ‘the pit.’ Once they got this thing going, they started to get some audiences and there just was not enough room in that little space in the pit.”
Eventually, Jazz Live became entrenched at the Lyman Saville Theatre, which was named after a theater instructor at the college.
Hildebrand said Jim Dark, the school’s dean at the time, and department chair Hope Faith viewed the station’s launch as a way to support the music and its performers, and Jazz Live dovetailed with that mission.
Most broadcasting, whether radio or TV, revolves around promoting products through advertising, Hildebrand observed. “For us, there were no commercials,” he said. “Our promo was jazz. We promoted jazz. We promoted the jazz community. And that’s really the essence of what KSDS had become.”
Biggs remembered his first Jazz Live gig during its early days with the late pianist Butch Lacy, who was a fixture of the San Diego jazz scene in the 1970s and ’80s before moving to Denmark.
“It was in a classroom at City College,” Biggs said. “It was just me and Butch. They rolled a grand piano in there and it was just the two of us. It was more like a class presentation. That was the vibe that was going on there.”
Biggs would go on to play many Jazz Live shows over the years, as well as other KSDS-supported opportunities, such as fundraising extravaganzas often held at Balboa Park.
“That was the great thing about Jazz Live—it always included a few youngsters,” he said. “They were just learning what media and presentation and probably jazz was for the first time, while they’re plugging everything in and getting it wrong. … It was always a fun thing.”
Eventually, Hildebrand turned over the reins of the Jazz Live production to Drexler in the 2000s. Early on, the concerts presented mostly musicians from the greater San Diego region and no admission was charged. In more recent years, the shows have featured nationally and internationally renowned artists and groups, such as Tierney Sutton, John Beasley, Alan Broadbent, and Peter Erskine.
“We came to the consensus that maybe [the station] could get some grant funding to get national touring jazz acts in here,” Drexler said. “We’ve got a very good theater and this would increase the level of what we’re doing, increase the prestige and make it more of an attraction for students that they’re producing and presenting a live jazz program with national touring talent.
KEEP ON ROLLING 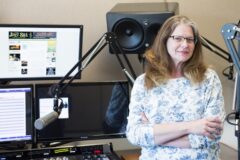 A more recent challenge resulted from the college’s decision a few years ago to discontinue the class that had been taught by Hildebrand and Drexler to produce Jazz Live. So, the station had to come up with funding through creative means to continue the monthly broadcasts.
While amid the pandemic, the studio at City College has reopened and the station is maintaining a limited on-air presence on weekdays with Kocherhans, Russell, Dhanifu, and Gary Beck handling the microphones.
“In the time that I’ve been there, we’ve had some pretty big hurdles to get over… but the station has always persevered,” Russell said. “The idea that we’ve been able to continue broadcasting, regardless of what has happened with economies or staffing issues, you name it, we just keep rolling. And I love that about the station. It’s like the little station that could.”
There is no reason to expect KSDS to falter in its mission of filling ears with finger-popping tunes, instructing inquisitive minds on the history of the music or the latest sounds, and serving as a pillar for the area’s world-class players as well as fledgling musicians.
“I’ve been saying probably for the last 10 or 15 years, I will stack San Diego’s jazz scene up against any city in America in terms of talent,” Russell said. “We may not have the most clubs. We may not have the biggest prestige in the country.
“In San Diego especially, you see someone like Joshua White evolve, and finally the Joshua White album, Thirteen Short Stories, is out. … It’s so wonderful to see people being nurtured through the jazz musician community and coming up and being those young lions and those rising stars.
“When people think jazz, they think New York, New Orleans, Chicago, Kansas City. But in terms of just the sheer talent that we have with our jazz community, I’d put them up against anybody in the world.”
This is excerpted from an upcoming book, The History of Jazz in San Diego.

Me and Ronnie Earl