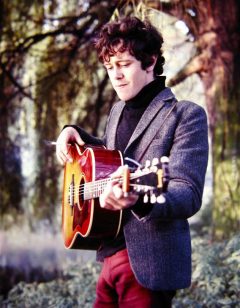 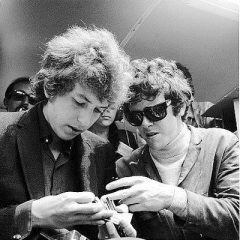 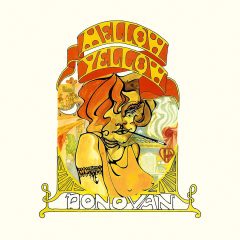 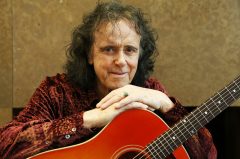 There’s a telling scene in Don’t Look Back, D.A. Pennebaker’s grainy 1967 documentary of Bob Dylan’s stormy 1965 tour of England. Dylan is in a hotel, filled with tour members, local celebs, musicians, and varieties of hangers-on. The Maestro is rifling through a British paper and happens upon an article on Donovan, the Scottish singer-songwriter who’d been gigging around the folk scene in the Isles and had recently scored a sizeable with his song “Catch the Wind.”

He was about 19 years old and the influence of Dylan on the younger singer was obvious in the hit with its acoustic guitar and Donovan’s nasal, twangy singing of the especially poetic lyrics. The only article missing on the song was a wheezy, crestfallen harmonica break. The success of the tune led journalists to call him “the new Dylan” or “England’s answer to Bob Dylan.” Dylan was reportedly bemused at how the press seemed to call for younger folkies to knock him from his supposed throne. This is where we find him in Don’t Look Back, staring at Donovan’s picture in the paper.

Alan Price, former keyboardist for the Animals, who was along for much of the tour, sits next to Dylan, a bit drunk, and gives the American the lowdown on the man in the newspaper.

“…He’s a very good guitar player,” says Price as he weaves to and fro. “He’s better than you.”

It’s not likely Dylan hated Donovan in any sense. Donovan instead became part of the entourage that followed the charismatic Maestro around. Later, a scene has the Scottish minstrel in another crowded hotel room with Dylan. Donovan plays guitar and sings “To Sing for You,” which earns him a round of friendly applause. The guitar winds up in Dylan’s hands, who then gives a snarling version of “It’s All Over Now Baby Blue.” Eyes are on Dylan and the room is rapt as the harsh surrealism rings from Dylan’s mouth.

Donovan didn’t fall prey to the fate of many other “new Dylans” who wound up in relative obscurity after an initial flash of attention. In short order, over the next couple of years, he shed his emulation of the Man from Hibbing and evolved into a diverse artist. His lyrics remained on the poetic side but gone were the feigned mannerism of rural expression. Rather than pretend he was from the back woods, he became more urbane, worldly. His voice matured, becoming more supple, melodic, versatile, and expressive in the wide swath of styles in the eclecticism that became his calling card. His songwriting came to us elements of jazz, pop, blues, a distinct form of acid-rock, and alluring takes on what soon would be called world music. Fans and pundits stopped comparing him to Dylan as Donovan’s personality and broad style came into their own There was a time in the artist’s career when I and other local pop music snobs thought Donovan had jumped the shark a bit with his 1967 release From a Flower to a Garden, notable, among other things, for being rock’s first double studio album. The two discs, though, stressed the nerve endings of too-serious teens like yours truly who wanted it grim, dark, and bleakly existential. Donovan had caught the Summer of Love virus with this release, appearing to go off the rails. He was now the Uber Hippie, transcendental in all matters in the Age of Aquarius. Flowing robes that dragged along the floor, an overkill of love beads, an equal overkill of fresh-cut flowers, bare feet, a haircut that made it looked like the man had combed his mane with an eggbeater—all this plus an expensive acoustic guitar are clues to someone of considerable talent who had started to take himself too seriously.

Our hero, though, is remarkable for his capacity to change styles and become interested in diverse ways of writing and singing about the world and the larger spiritual universe. And there is, to be sure, a refreshing strain of skepticism, aesthetic distance, and a firm grasp of irony in much of his songwriting that has gone overlooked. The image of Donovan, the-counterculture seer, still tends to cloud much of the public reception when we approach his songwriting craft. His oeuvre needs a major reappraisal by professional critics and high-minded fans, as there are wonderfully made and even sardonic masterpieces among the glitzy paraphernalia of the Youth Quake. Let’s take a look at three songs: “Sunny Goodge Street” (from his second album’s1965 Fairytale), “Epistle to Dippy” (a single released in 1967), and “Young Girl Blues” (from the Mellow Yellow disc in 1966) are quite a bit more cynical and knowing than his later reputation suggests.

“Sunny Goodge Street” is a panorama of a particular urban hip scene so commonly portrayed in flashy and groovy terms in the ’60s, but Donovan’s version of it makes it seem unpredictable, violent, paranoid, and incoherent. It is closer to William Burroughs than to Scott McKenzie’s version of John Phillip’s saccharine paean to hippiedom, “If You’re Going to San Francisco (Be Sure to Wear Some Flowers in Your Hair).” As with Burroughs, the air appears to depict a drugged-out state on its own terms. Donovan seemed to understand that the counterculture was as much a creep scene as it was a gathering moment for truth seekers, poets, and sensualists who desired both sex and innocence. While the cost of reaching all sorts of forbidden knowledge, drugs and the attending hype was unknown, and Donovan had a foreboding rarely expressed by a generation of musicians that was self-infatuated. It has a jazz-ballad feel—slow, swaying, almost precariously—the lyrics suggesting a denizen who’s smoked too much trying to stay awake until he finishes saying what he’s determined to get out.

In dollhouse rooms with colored lights swingin’
Strange music boxes sadly tinklin’
Drink in the sun, shining all around you

The magician, he sparkles in satin and velvet
You gaze at his splendour with eyes you’ve not used yet
I tell you his name is love, love, love

Nothing specific, profound, or stirring uttered, though, as each sentence chops off the sentence that came before, one idea and detail of the street canceling out the other, the details are blurred rather than vivid impression of the neighborhood. It’s probable that this is what Donovan meant, preferring to give us an indefinite scenario rather than words extolling drug use or hippie culture. We find here that Donovan has mastered the Great Poet’s super power, as did Eliot and Ashbery and Elizabeth Bishop, which is to rise to the challenge of not making literal sense in the subject matter and yet still giving us a sense of what the experience was like. No lecture, no propaganda, an accord shattered and pieced back together. Under the sweet music of the lyrics lurks a dead zone of imagination; it is among the more disturbing I remember from ’60s FM radio.

“Epistle to Dippy” is nothing less than a direct address of a try-anything scene maker who dashes from drug to scene to fad in an irrational attempt to out run their own vacuity, their utter lack of soul or genuine sensibility. In his liner notes for a Donovan box-set Troubadour, writer Brian Hogg relates the song, written in letter form to a friend, which abounds with a strong pacifist message while teeming with psychedelic imagery. Hogg further writes that the actual subject of the song, who was serving in the British military, soon resigned from the service after hearing Donovan’s words that convey a strong extolling of pacifist philosophy. That is the story behind the headline, but I felt something darker into the song since my first listen decades ago. This is a cutting critique, more potent than the Beatles’ polite poo-poohing tune along the same theme, “Nowhere Man.”

Look on yonder misty mountain
See the young monk meditating rhododendron forest
Over dusty years, I ask you
What’s it’s been like being you?

Through all levels you’ve been changing
Getting a little bit better, no doubt
The doctor bit was so far out
Looking through crystal spectacles
I can see I had your fun

Rebelling against society,
Such a tiny speculating whether to be a hip or
Skip along quite merrily

Through all levels you’ve been changing
Elevator in the brain hotel
Broken down but just as well-a
Looking through crystal spectacles,
I can see you’ve had your fun…

“Young Girl Blues” is a doleful, world-weary observation, a bittersweet recollection of an ingenue who had gotten tired of her own hipness and the chronic scene-making. The details are spare, bone tired. They create a bleak view of such an noisy and hip scene of the fever-pitched Sixties. Donovan senses the isolation—none of the scene makers can break away from or cure with brand names, loud music, and chemicals. There is. through it all. an implied yet emphatic sense that youth and beauty fade and that the impulsiveness and egocentricity of being young must evolve into maturity lest someone young girl or young man, remain stunted, incomplete in their humanity.

Coffee on, milk gone
Such a sad light unfading
Yourself you touch
But not too much
You hear it’s degrading

High heels, car wheels
All the losers are grooving
Your dream, strange scene
Images are moving

Donovan is a perceptive witness to what unfolded. He skillfully sets a scene with telling details, artfully establishes the mood of the era, and is not reluctant to examine the emotional and psychic dead ends that fester under the utopian hoopla. Donovan realized he was observing a generation waste its potential on trivial frolics. “Young Girl Blues” crystalizes the unwelcome truth that beauty and youth fade and the weight and of existence must be faced. This is The Bard’s way of letting listeners know that one can grow up or grow old. He has the skill to insinuate an anonymous narrator, privy to and sympathetic with the character’s internal struggles, and adroitly outline a small cataclysm as the protagonist journeys from self-delusion to an inevitable, rueful clarity. Donovan is a master of compressed tragedy.

Among the immensely popular songwriters who emerged from the Sixties revolution Donovan has been given the short shrift. Hardly ignored, of course, but it’s a mystery that there hasn’t been much in the way of broadly circulated critical reappraisals of his music and lyrics considering his extraordinary evolution as an artist. The work has varied in quality over the decades, but what good musician’s work hasn’t run hot and cold in a career that lasted five and a half decades? Donovan very much merits another visit. A closer look, another listen, a reacquaintance of this man’s remarkable oeuvre will bring more masterpieces to the fore, a better sense of what a bright young talent comprehended during a complicated era. It’s my hope that his best and most interesting music, created through fad and fancy of a great many years, finds a broader listenership.

The songwriter’s best work holds up, and it holds up for the same reason Norman Mailer’s Armies of the Night or Tom Wolfe’s The Electric Kool-Aid Acid Test hold up; each is an exquisitely etched portraits of the Sixties that bypassed the mass-mediated brainwashing fostered by Time and Life magazines, which spoke of Youth Culture and revolution that was as problematic as the Establishment activists and idealists said needing radical changing.

Band of Brothers: The Liggins Brothers

Time Between: Chris Hillman’s Life in Music Leads to his Roots