February 2023
Vol. 22, No. 5
Odyssey & Oracle in Wax (or how I found my groove) by Andy RasmussenJuly 2019
Notes on On the Beach by Neil Young by Ted BurkeJuly 2019
Beehives and Hand Claps: The Enduring Quality of Girl Groups by Steve ThornJuly 2019
Wow by Moby Grape July 2019
School Girl Crush by Sandra CastilloJuly 2019
Record Store Day 2019 by Leonard SciutoJuly 2019
Passing the Torch by Brendan BoyleJuly 2019
Advertisements 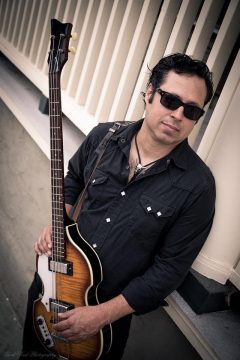 I was about two years old when I heard my first favorite song, “Rock & Roll Woman” by the Buffalo Springfield… even then I was a music junkie. Followed closely by anything from Crosby, Stills, Nash and Young, or any harmony-driven music like the Everly Brothers and Simon and Garfunkel, music was almost always blaring from the small radio of my parents’ van, as we tumbled across the back roads and small towns in Spain. Being a Navy brat, I had a unique chance to soak in the sounds everywhere I went. Growing up in Chipiona, Spain, I can still recall the small cafes and bodegas with the sound of flamenco guitars and dancers. With the quick clapping and that particularly haunting melody from the flamenco singers, it sounded like a mix of Spanish and Arabic and sent shivers down my spine every time. It was incredibly passionate, stirring, and that’s when I identified with “soul” music. That inner voice, or pull, that somehow had its pulse on my emotions. I knew since then that I’d be happiest when surrounded by music, or had it as an outlet.

Fast forward a few years across the Atlantic, down through the gulf and into south Texas. I moved with my family to Corpus Christi. It was hot, humid, and sticky, with constant wind and heat. In a way, the music was no different. There was Tex-Mex music blaring everywhere and Freddy fender was king. There was country music, funky soul, and it was the first time I heard Cajun and Zydeco. While all of this was around, it was all about 1950s rock ‘n’ roll. And who could blame me? It seemed to be everywhere, with “Happy Days,” “Leave It to Beaver,” “Laverne and Shirley,” and “Sha Na Na” on the tube. There was American Graffiti, American Hot Wax, and Grease in theaters. Seems there was a nostalgic flare up in the ’70s, though I was hearing it all for the first time. My older brother Johnny would pick up those K-Tel ’50s collections and random compilations. My favorite was a Happy Days record with the Fonz on the cover (“sit on it!” Ayyyyyyy). I was enthralled with the driving beat of Lee Dorsey’s “Working in the Coal Mine.” And teen tragedies like “Tell Laura I Love Her,” “Last Kiss” by J. Frank Wilson. And, of course “Splish Splash” by Bobby Darren, “The Wanderer” by Dion, and “Blueberry Hill” by Fats Domino. I loved his effortless, rolling piano lines.

Then as quickly as that all started, I was off to Oxnard, California. I got used to the moving, changing schools, making new friends, and such, but the constant for me was always music. At this point, my brother and I were listening to the Huggy Boy Show and Art Laboe on the radio. We’d stay up to midnight almost religiously on Fridays and Saturdays to hear Johnny Ace sing “Pledging My Love” and those dedications to lovers everywhere. I loved “Teen Angel, ““Who Wrote the Book of Love,” “Stranded in the Jungle” by the Cadets, and my personal fave, “Two Faces Have I” by Lou Christie. We’d save up our lunch money and buy those Art Laboe records, which they’d sell on the radio “For just the cost of a carton of cigarettes, these super oldies can be yours!” We’d go to the liquor store, get a money order, send it off, and wait for months, it seemed, for them to come in the mail. And when they’d arrive, we’d been in vinyl heaven! These records had a lot of the gems you didn’t always hear on the radio, like “Searching for my Love” by Bobby Moore and the Rhythm Aces, the Sapphires’ “Who Do You Love,” “Oh My Angel” by Bertha Tillman, “Let’s Get Together Again” by Carol Hughes—that one just chokes me up every time.

As fast as you can say “One two, uno dos tres cuatro” I was back in Corpus Christi, Texas. By my teens, I was old enough to appreciate the regional music and sounds all around me. Sunday mornings we’d watch the “Domingo” show, which featured a host of all the top Tex-Mex bands around like Little Joe y la Familia, Los Dinos (which featured a young Selena), Los Gary Coopers, Banda Del Mar, and, my favorite, Steve “El Parche” Jordan. Known as the “Jimi Hendrix of the accordion,” I was absolutely in awe of his playing and ability. He’d start into a traditional Tex-Mex groove, but somewhere he’d get all psychedelic in the solo, hang there for a while, and then come back without missing a beat. Plus, he had the longest hair I’d ever seen, and with that badass patch, I was just awestruck. He didn’t record very often, but I did track down a record he did with his brothers, simply called “The Jordan Brothers,” on ARV records. And what an album it is. They mixed Tex-Mex music with polkas and rancheras, along with soul and straight ahead rock ‘n’ roll, covering the Beatles “Run for Your Life,” and a rocking version of “La Bamba,” making it all their own. This, of course, led me to another Texas icon, Doug Sahm. With the Sir Douglas Quintet, and later with the Texas Tornados, he managed to encompass everything he grew up with in Texas. He had heard the blues on the east side of San Antonio, the Chicano soul of the west side, a bit of Cajun, loads of country, and that Tex-Mex beat that oozed out of everything and everywhere. Since then I bought just about every record from him I’ve come across, and his records still manage to surprise me with every spin.

It was late night radio (again) while in Texas that grabbed my brother’s attention. I remember waking up one morning to my brother’s voice, who looked as if he’d been up all night; he pulls out a cassette tape and says, “You got to hear this show from last night!” with his eyes all glazed and buzzed with music. So I slapped it on and I was hooked to the Telephone Road Show (with host Frank Motley). It was the first time I had heard of the Beat Farmers and the Paladins. It was a very “loose” show that featured guests weaving in and out, sometimes bringing records or “gifts” of some sort to the host, affectionately known as Mr. Telephone Road. He played a lot of the Blasters, “American Music” was the theme song. I heard Joe “King” Carrasco, the Long Ryders, Evans Johns and the H Bombs, Blood on the Saddle, the Raunch Hands, Minutemen, X, Rank and File, Leroy Brothers, Stevie Ray Vaughn, and more. They called it “Cow Punk” or “American Music,” but it was the early stages of “Americana” as it came to be known. Intertwined were a lot of blues, Cajun, and Zydeco music, which I found quite a passion for.

Once my dad retired, it was time to settle back in San Diego. By that time I was playing the bass in bands and finding my path musically. I had a friend in high school who turned me on the Tell-Tale Hearts, and Pandoras, and there began another quest to devour all the albums by those cool bands. As I learned to play bass (and guitar), I played along to the records and eventually became adept at playing by ear. I soon sought out records by the Crawdaddys, the Event, the Zeros, the Gravedigger Five, Manual Scan, and a ton more. My hair grew longer, and I had to use Vox gear exclusively. I was heavy into Nuggets and Pebbles compilations, and feverishly sought out vinyl by the Count Five, the Seeds, the Barbarians, Amboy Dukes, Blues Magoos, Electric Prunes, Love, Barry and the Remains, and so many others. I remember coming across a magazine with Sky Saxon on the cover, and had to pick it up on the spot. I hadn’t heard of half of the bands in it. I swear they were making it up. The Pretty Things? Q65? Downliners Sect? Remember, this was all pre-internet times, so finding these records were next to impossible, and information was even scarcer. This, of course, was my introduction to Ugly Things magazine, published and edited by Mike Stax, who valiantly manages to publish it to this very day.

Since then, I’ve been playing in bands almost non-stop, and have played with and opened up for a lot of my musical heroes. I still have a passion for finding and exploring new music all the time. It’s a journey that I’ve loved and followed through with life’s twists and turns. No matter how or where it’s all led me, it’s all in the grooves, and I’ve found it every time on vinyl.