When Winston Churchill was identified with this frequent quote it was taken as the wisdom from an old guy being humorous. Little did anyone know the turn of phrase would play out in the 21st Century. Now, in 2020, former Buffalo Springfield co-founder Richie Furay and Woodstock alumnus Arlo Guthrie have released their respective music videos “America, America” and “Hard Times Come Again No More.” They were once considered liberal musicians determined to bring change to the world. 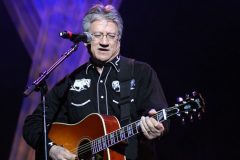 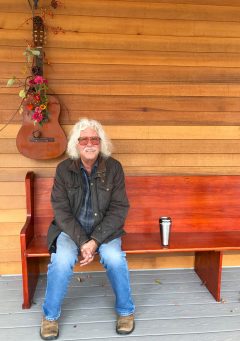 But today Furay and Guthrie have created a modern illustration of Churchill’s famous quote during this time of patriotism and crisis. I would argue that maybe the term “wisdom” should replace “conservative” in the case of these iconic artists from the decade known as the ’60s. Neither Furay nor Guthrie would succumb to any easy labels in their music or their political views. Both artists have their roots in 1965 when America was embroiled in the controversy over the Vietnam War, social unrest, racial strife, civil rights, and outspoken activism.

Furay and Guthrie have noteworthy parallels during their life and times. Furay is known for helping to create an essentially soulful form of good-time country rock while Arlo has spent his career as a folk singer, songwriter, and troubadour of good-humored tales and songs, epitomized in his classic Thanksgiving tale of a mischievous youthful trash-dumping and a commentary on the draft in the Piedmont blues-based talking-blues ramble, “Alice’s Restaurant.” Both artists have moved into more conservative ventures. Both have actively pursued spirituality as the center motivations of their lives. Most recently, both artists have decided to retire from the hard road of touring. Probably most important, these latest music videos from Richie Furay and Arlo Guthrie point to the hope of community as the path to redemption.

Back in 1966 and beyond, many artists from Richie Furay’s circle of friends responded with powerful songs of protest critical of the government’s actions. The band Furay co-founded in 1965, Buffalo Springfield contributed the landmark song based on the Hollywood riots of 1966, “For What It’s Worth, written by his bandmate Stephen Stills. The song remains today an anthem for demonstrations and protest as well as a symbol of the times.

Through a career that includes co-founding the pioneering country-rock band Poco and a critically successful solo career that spans 40 years, Furay has created a legacy of uplifting and appealing songs of love with the emphasis on the positive. When he converted to Evangelical Christianity in 1975, his debut solo album, I’ve Got a Reason, allowed him to translate his experience on an album that stands today as a breakthrough the expression of faith to the rock medium without religious overtones. He would later become a pastor of a Christian non-denominational congregation in Colorado.

The release of the video America, America finds Furay fully in touch with the concern many American artists and songwriters have felt during times of unrest and changes along our social and political landscape. Wisely, Furay begins the song with an echoed refrain from the classic “America the Beautiful.” The choral refrain is changed from “God shed his grace on thee,” to a paraphrased plea,

America, America/God shed your grace, please do/Wake up! Wake up! Before we hear the Bells that Toll.

The original song was written in an unintentional collaboration with poet Kathy Lee Bates, a Wesleyan professor, and Episcopal church organist Samuel A. Ward. The two never met. After several revisions, the central theme of the song was found in the poetic words of universal community, described as brotherhood. Bates was a feminist activist as well as a Christian who decried the trending nationalism of her day. This accounts for her reference to “brotherhood” and the request for an outpouring of grace. The plea for grace refers to those flaws she recognized in America at the time, including the labor outcome of the industrial revolution and rampant racism. But ultimately, her poem is a prayer of hope and love for the homeland.

Richie Furay’s song carries his trademark emphasis on a driving percussive acoustic guitar that echoes Buffalo Springfield’s sonic foundation on their first album. The minimal instrumentation is caressed by beautifully realized vocal harmonies and background vocals. At the center of it is Furay, the rock ‘n’ roll singer at ease in his role as prophet, preacher, and teacher who carries love, compassion, and a desire for the righteousness of the people of his nation. He is no less on fire than was Jonathan Edwards when he preached about “sinners in the hands of an angry God.” Only there is a confidence in Furay’s words and vocal that comes from the experience of real love.

The accompanying video underscores the song’s strengths with an acoustic lead guitar line that seems to travel across space and time into a domain of unity and peace. The events depicted in the video are stark and bold, with the answers from Furay’s source of faith in the gospel he has embraced. It’s noteworthy that he never points to a political answer or an endorsement of one or other side of our great political divide. He finally lands on the vision of America as a land of grace where redemption is found in a wakefulness to our divine calling.

While Arlo Guthrie’s spiritual and musical story comes from what may seem like a different path than Richie Furay’s, they have traveled parallel journeys on the road to their own personal rebellion in response to the accepted norms of the counterculture of their youth. Guthrie has the advantage of his birth into folk music and dance royalty with his father, Woody Guthrie, among the most significant folk singer-songwriters of the 20th century and his mother, Marjorie Mazia Guthrie, a principal dancer in the Martha Graham Company.

Arlo became his own legend early on when, in his teens, he wrote and performed his hippie opus and comment on America’s draft system, “Alice’s Restaurant.” The song, based on the medium often used by his father known as talking blues, ran 18 minutes and tells a story of Arlo’s teen years, garbage dumping, and the draft. The song has become a Thanksgiving perennial favorite and even spawned a counterculture film directed by Arthur Penn (Bonnie and Clyde). It has earned classic status for its authentic depiction of America’s youth in the 1960s.

During the ensuing years Arlo established his credibility as a song-carrying troubadour, songwriter, and an engaging storyteller. His strong suit in performance has been his gift for bringing out the humor and the bittersweetness in the tales of his life with friends and family.

His gifted ability as a song interpreter gave him his only major hit song to hit the national charts, the now-classic “City of New Orleans,” written by the late Steve Goodman. Today he has become an established and anticipated touring entertainer. Over the last several decades he has sold out concert halls and introduced scores of college and university performing arts centers to the folk music of his roots as well as his original songs and stories.

When the Pandemic hit in the spring of 2020, Arlo Guthrie was grounded from a vital touring career. It was during this time he recorded and filmed Stephen Foster’s 19th-century classic song of the Civil War era, “Hard Times Come Again No More.” To do so, he reached out to a community beyond his Florida or Berkshire home. However, there is a backstory of spiritual influence that led to Arlo being who he became.

In the late ’70s it led him to become a Franciscan lay brother—a monastic order dedicated to the spiritual principles of Saint Frances of Assisi. The songs on one of his best studio albums, Outlasting the Blues, include direct Catholic-mystic lyrics that illustrate this period of his life. Eventually, Guthrie settled into a Hindu community known as Kashi in Florida, which emphasized interfaith spirituality. He has since been active in this community of meditation practice for many years.

This was followed by the purchase of the original Episcopal church in Housatonic, Massachusetts, where the saga of Alice’s Restaurant took place and where the movie was made. Today it is known as the Guthrie Center. It is a place of music, history, contemplation, and action that provides community service and support to those in need. This includes free meals as well as an annual Thanksgiving dinner for all who come. When asked what religion is adhered to at the center, Guthrie smiles and replies, “It’s a bring your God church!”

After months of being sheltered-in-place in his Florida home, Guthrie was eager to produce new music in lieu of the now off-limits live performances. So, he went back a couple of centuries. Stephen Foster (1826-1864), still considered America’s greatest songwriter by many, wrote “Hard Times Come Again No More” in 1854, about the hardship of the times during the pre-Civil War era. The collaboration included the great pianist, Jim Wilson, who also produced the video; gospel soul singer Vanessa Bryan; and legendary jazz bassist Stanley Clarke. Wilson, Guthrie, and David Beeler added a verse to bring the song into the pandemic influenced times of today.

The result, like Richie Furay’s release, is a call to unity as the world endures the devastation of an unpredictable foe known as Covid19. Cast in a sepia tone alongside stark black-and-white stock footage of the Great Depression of the 1930s, the video is centered first on Arlo as he sings from his home. The sometimes-grainy vintage footage shows the past devastation that includes the Dust Bowl era most effectively using classic photos like the iconic black and white Migrant Mother and stills of the Dust Bowl. Also included is a touching portrait of an aging and ill Woody Guthrie posing with Arlo Guthrie during childhood. It then blends and fades into musicians who accompany Arlo.

There are some beautifully photographed blended filming of Arlo singing with jazz great Stanley Clarke, playing a stand-up electric bass. The antique footage and the modern visuals are separated through the use of color as the scene turns to today’s world. The final verse brings us to all-too-vivid images of modern times under the cloud of the pandemic and civil unrest. The final theme of community, unity, and compassion that comes through in the final moments of the video include a collage of the musicians blended around Arlo and then fades to hills of gold as he sings the final verse with hope and optimism:

As the songs of Richie Furay and Arlo Guthrie go out into a world wounded with disease and the divisiveness of polarized national elections, their releases will reach an audience hungry for truth, peace, compassion, and mercy. Both songs carry moments of grace and authentic prayers for the healing of the land and its people.

It’s been a long journey from 1965 to 2020, when both Richie Furay and Arlo Guthrie began their careers on separate shores not intending any kind of a lofty mission. They wanted to make music and it’s safe to say that Furay and Guthrie have enriched our lives as they have entertained millions. But, today, perhaps the conservatism referred to in the Churchill quote actually means the kind of wisdom that comes from heart-felt love as it extends beyond today’s bitter self-righteousness. These two songs are a reminder of the real peace and proactive love that can lead a nation to redemption through music and community. It is the gift of the song and the troubadour, courtesy of two veteran musicians from a long-ago decade of change.