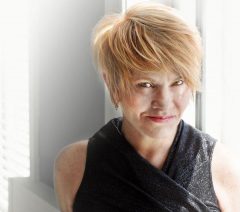 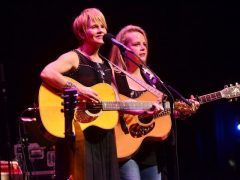 Colvin and Chapin-Carpenter in concert together.

Veteran singer-songwriters teaming for tours is not new. For Shawn Colvin and Mary Chapin Carpenter, appearing on stage together in the fashion of the old school Nashville guitar pull, allowing the song to take center stage, is a fresh but familiar concept for these two artists. They have toured this way before, in 2013. They have also been appearing on each other’s albums for many years.

At first glance it may appear that they are two artists who have long since hit their peak and are now on the other side of their musical journey, perhaps headed for an inevitable sunset. Hardly. A closer look at both artists and their recent work suggests their current partnership on the road may be more of a point of renewal rather than resignation. It’s a move of certainty and soul renewal in an industry that still values the latest and the youngest trendsetters over established veteran artists that are too often misjudged as yesterday’s news.

Colvin and Carpenter found critical and popular success in the 1980s and ’90s, a unique time in American music. For reasons still hard to explain, the music industry was struck with a case of good taste in artists with strengths as songwriters with folk and country leanings. So in an unmistakable case of good timing Shawn Colvin and Mary Chapin Carpenter were swept up in a wave of artists that included Lyle Lovett, Steve Earle, Rosanne Cash, and Suzanne Vega. It led them into uncharted territory for many writers of the day. That is mainstream pop music success with charted hits and awards included in the deal.
But the success of this generation of artists would not last long. By the turn of the century, with the movement toward new forms in popular music—genre-bending country music to comply with pop trends and the advent of the Internet—new marketing campaigns resulted in quickly and quietly sweeping some of the most talented artists of their time away in favor of more homogenized and easy-to-sell pop-centric music.

Shawn Colvin and Mary Chapin Carpenter were among the many songwriters who made the transition into what is now labeled Americana music. Centered in Nashville, Tennessee and Austin, Texas, the 20 year plus genre has provided a place, to put it simply, where artists like Colvin and Carpenter can go to have their music heard. Americana music has also become a gathering place for the best in American roots musi,c inclusive of genres as diverse as gospel, folk, rhythm & blues, bluegrass, and country.

Since those early days of critical and popular success Carpenter and Colvin have continued to thrive recording and touring, sometimes even together. Along the way they have become friends. According to both artists, this is what makes this current tour such a pleasure.
Indeed, the bond they share is that of sisters in song and soul. They share in common a deeply felt love for the life of their music and the people who are drawn to it. It shows in their singular stories.

Born in South Dakota in 1956, Shawn Colvin was raised in Illinois and spent some years in Ontario, Canada. Learning guitar at 10, she found her love of folk music through her father’s record collection, which included Pete Seeger and the Kingston Trio. Her first performances took place in Southern Illinois where she formed a band, eventually landing her in Austin. As a solo artist she moved on from there to the folk scene in Berkeley, California. Not long afterward she moved to New York City where she joined Buddy Miller’s band. The year was 1980.

It was during this time Colvin joined Suzanne Vega in the studio and on the road as a backup singer. This led to a solo record contract and her Grammy-winning 1989 debut album Steady On. During the intervening years she continued to release critically acclaimed Grammy-nominated albums. In 1996, her first and only hit single, “Sunny Came Home,” was released which, in 1997, won a Grammy for Song and Record of the Year. This would represent her career peak in mainstream popular music.

Colvin’s career would take some dips and turns but found a resurgence with a new independent record label and the release of 2006’s These Four Walls. In 2012 Buddy Miller produced All Fall Down, which included support from Jakob Dylan, Emmylou Harris, and Allison Krause. She also released her memoir Diamond in the Rough.

Most recently, in 2016, Colvin has released a duo album with her contemporary, Steve Earle. In October 2019 she was inducted into the Austin City Limits Hall of Fame.

If any artist could be pointed to as a kindred spirit with Shawn Colvin it would be Mary Chapin Carpenter. The two have shared bills often over their years on the road. In 2013 they did their first tour together. Audiences and critics alike warmed to the living room stage set up to allow each songwriter to share songs and stories. However, sitting still was not always a familiar stage presence for Mary Chapin Carpenter.

Known for a string of country hit songs during the ’80s and ’90s, Carpenter’s stage show found her dancing and moving across the stage as she sang hits like “Down at the Twist & Shout.” But like the best of country and folk songwriters, Carpenter dwells in the highs and lows found at the heart of her songs. As close friends the two artists share a range of emotion on stage during their show that clearly has bound them together as sisters in song.

Mary Chapin Carpenter assumed that her musical abilities, which were pronounced throughout her childhood as a guitarist and folk singer, were only a pastime and hobby. However cloistered she may have felt growing up in Washington D.C., where her father suggested she try out her skills at a local open mic night, she became a local success. Word about her would spread fast enough.

Still, throughout college and even after graduating, she was not convinced that her music was anything more than a lark. It was during a job search after college, and with some persuasion from her music partner John Jennings, that she began to invest herself fully into her music career. The result was a 1981 recording contract with Columbia Records.

Since her first release, when Columbia took this lifelong folk singer and marketed her as a country star, the road has been one of unusual success for this singer of insightful and thoughtful songs. With bestselling albums and 20 Top 40 country hits, she has managed to sell her albums to pop, folk, and country audiences the world over. Her original songs have told of the struggle of being a woman in today’s society while including all of humanity in her compassionate outlook.

She has won five Grammys and multiple country music awards. Along the way she fought for just causes and stood up for the less fortunate with organizations like Habitat for Humanity.

As Mary Chapin Carpenter and Shawn Colvin take to the road together again, they bring their treasure trove of songs with them. It is indeed a national treasure that they embody as women and as songwriters. They have endured, persevered and now represent a legacy of music that has proven timeless and golden. In our present day world, with divisiveness and cynicism the rule, Mary Chapin Carpenter and Shawn Colvin, through their friendship and music, provide us with the spirit needed for the healing of our culture today.

See Shawn Colvin and Mary Chapin Carpenter in concert on Thursday, December 5, at the California Center for the Arts, 340 N. Escondido Blvd. Go to artcenter.org to purchase tickets.

Susan Werner Lets Her Heart Do the Talking