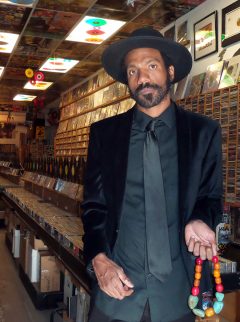 Moore is a normal guy with a stable career. He warns of a mess in his Golden Hills residence, but the single apartment is practically spotless. A stained glass window and hippie Santa Claus welcome visitors inside.

Born and raised in El Centro, far from a music mecca, Moore decided to move here in 1991. San Diego is where he first witnessed the rock bands he still idolizes, evident in stacks of vinyls and thousands of heavy metal songs in his iPod. His favorite band of all time is Led Zeppelin, but AC/DC isn’t far behind.

His website, sandiegoconcertarchive.com, chronicles the local performances that took place during the 20th century. It is a comprehensive account of over 3,500 concerts that came through town over the past 70 years. His purpose is to recognize this city’s contribution to the national music scene and showcase San Diego as a viable destination for touring bands.

Some of the concert listings even include set lists, attendance figures, and anecdotal tidbits. The archive encapsulates every era and genre imaginable, from big band and country, dating back to the ’30s to the new wave and punk rock of the ’80s and ’90s. On virtual display are Moore’s mementos of music memorabilia, including concert posters, flyers, and tickets.

“Before barcodes and holograms, promoters often spent as much time decorating their tickets as they did with their posters and handbills,” Moore comments. “Even with their minimal amount of information, tickets provide an important part in the documentation of the San Diego music scene.”

Online resources can be sketchy and unpredictable, but Moore’s thoroughness ensures that his website is up to date and accurate. He is a humble, private person who tends to shy from the spotlight. A self-described “day person,” Moore spends most of his time working and listening to music, and that’s how he likes it.

The San Diego Concert Archive stemmed from his hobby of collecting of concert posters, which he’s always valued like Picassos. The notices chronicle the transition from the liberating ’60s to the self-indulgent ’70s to the self-destructive ’80s. From hand-screened cardboard to digital masterpieces, posters have always been on the cutting edge of modern graphic art. Moore was never old enough to know when KISS was coming to town, so he relied on posters to find out.

“A long time ago, it was the only means of advertising for concerts,” Moore recalls. “People would slap posters on telephone polls; otherwise, kids were unaware that their favorite band was even playing.”

Moore started researching at the local library and music stores, combing through microfilm files for hours on end. His then girlfriend offered to catalog the concert listings by typing it up, something that Moore wasn’t tech savvy enough to consider. Fortunately, friend and web designer Joe Garcia constructed and maintained the website free of charge.
Moore provides an invaluable look into San Diego’s cultural history. Among the classic memories include the West Coast debut of Elvis and Bob Dylan finding Jesus on stage at the Sports Arena. But Moore also uncovered some hidden gems of San Diego’s music history, ensuring that the legends and legacies are not soon forgotten.

“When I’m dead and gone, this stuff will live on,” Moore recognizes. “I plan on donating my collectibles someday.”

One of the places he’s most fascinated with is the Bostonia Ballroom in El Cajon, which hosted some of the biggest country western shows in Southern California. Today it’s an Italian restaurant, but superstars like Johnny Cash, Carl Perkins, Hank Williams, and Patsy Cline rocked the honky tonk saloon during the late ’50s.

The subsequent decades were a true test for San Diego, long known as a politically and socially conservative city. “Love-ins” and “happenings” were glorified hippie fests of nakedness, live music, and free love. The premiere of Elvis was nearly thwarted by the police chief who threatened him with arrest.

The Rolling Stones first appeared here in 1964 at the Starlight Bowl. The following year, the Beatles made their first and only appearance in San Diego at Balboa Stadium, now a City College parking lot. Jimi Hendrix played the stadium a week after the Who’s debut in San Diego.

The Sports Arena opened in 1966 with a bang. The first concert was James Brown, and Led Zeppelin made a second home there throughout the ’70s. Psychedelic light shows accompanied the extravagant performances of this era. Although the Hippodrome lasted less than six months downtown, it hosted two Velvet Underground shows.

San Diego has also had its fair share of homegrown heroes. Writers Lester Banks and Cameron Crowe have impacted music journalism tremendously. Not only was San Diego the birthplace of the Brain Police and Iron Butterfly, but it also spawned Tom Waits and the Stone Temple Pilots.

Over the years, a myriad of performance venues have fallen by the wayside in San Diego. During the ’60s and ’70s, concert promoters rented out city owned venues like the Community Concourse, Civic Theater, and the Orpheum. Unfortunately, strict laws and bureaucracy sabotaged shows when police started shutting down concerts for lack of security or permits.

“Today, concert promotion is a major industry,” Moore admits. “Once corporations realized how lucrative live music could be, organizing shows became big business.”
Throughout the gritty ’80s and ’90s, Tim Mays brought bands like Social D, REM, and Bad Religion here. The Back Door at SDSU as well as the Wabash Hall in North Park were hot spots for young punkers. The original Casbah even hosted Nirvana and Smashing Pumpkins.

Moore, himself, has evolved over the course of compiling data for the archive. He grew up on classic rock and hair metal, but as he learned more about roots music and the influence of Americana on rock ‘n’ roll, he grew to appreciate folk and country.

“I didn’t really start out with a goal except to share this information with others,” confesses Moore, who doesn’t profit from the website. “Along the way I’ve met some great people who’ve lived through monumental events and put music into a historical context…It’s not about taking, it’s about giving.”