February 2023
Vol. 22, No. 5
The Starving Musicians: Where to Eat in this Town by Cactus Jim Soldi & Maximus SparhawkApril 2013
Back with a Bang! Java Joe's Reunion at San Diego Folk Heritage by J.T. MoringApril 2013
Book Review: The Philosophy of Modern Song by Bob Dylan by Ted BurkeApril 2013
Rick Nash: Bass Man in Demand by Wayne RikerApril 2013
Mod Revivalists the Trebels to Reunite for 40th Anniversary Show by Jim TrageserApril 2013
If Music Be the Food of Love, Play On: Dually Noted Pairs Fine Food and Fine Music by Paul HomiczApril 2013
Harold in the Land of Jazz by Bart MendozaApril 2013
Sephardic Dance and Music by Yale StromApril 2013
Loretta Lynn: A Special Tribute to the Queen of Honky Tonk by Terry Paul RolandApril 2013
Ben Grace Gilmore: It's All About Building Community by Sandé LollisApril 2013
Advertisements 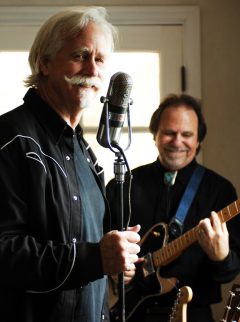 Eastbound Bar & Grill, Lakeside
Lakeside, a small town nestled in the western foothills of the Cuyamaca Mountains, conjures up visions of cowboys and horses. Upon our arriving at Maine Avenue, the heart of its historic downtown district, the mental picture is confirmed. Here we are at the Eastbound Bar and Grill, a friendly neighborhood restaurant and sports bar with a saloon-like vibe. The staff is efficient, and the waitresses are obviously hand selected for their welcoming demeanor and big… smiles.

This is not a quiet place; it’s loud and generally packed with the younger blue-collar set. For a moment, I thought that Jim and I had successfully dodged the paparazzi to walk in unnoticed on a Friday, thinking that perhaps our weathered cowboy hats and scuffed boots would make it look like we were regulars and not the legendary Starving Musicians on their eternal quest for good food and live entertainment. We quickly discovered, however, that T-shirts, sleeveless tank tops, ball caps, and tennis shoes are the fashion statement preferred by this clientele. We found this surprising, being that it is just walking distance from the Lakeside Rodeo Grounds (a national PRCA-sanctioned destination for competition bull riding, steer wrestling, calf-roping cowboys) yet there was nary a cowboy hat or pair of Tony Llama boots to be seen. Well, except ours.

Although Eastbound Bar and Grill offers a fully stocked bar, what really appealed to us was the dazzling array of beers on tap — we counted at least a dozen micro-brew offerings as well as the more pedestrian corporate-owned major labels. It appeared that ice-cold draft beer and large gourmet hamburgers are the mainstay here. We’re down with that, being cowboys at heart.

It wasn’t hard to make my selection, a bleu cheese burger, a perennial favorite of mine, and weighing in at better than half a pound! Jim opted for a sandwich packed with diced chicken, peppers, and cheese, with a mild Southwest-inspired sauce and served up on a toasted roll. To our delight, both entrees included ample amount of fries. Not anticipating the portion sizes to be as generous as they were, we also sprang for the Buffalo wing appetizer. Needless to say, Jim and I could not have left Eastbound without leftovers on our plates.

Although, admittedly, we didn’t get there while a band was actually playing, management assured us that they do hire live music on the weekends, and, in fact, we’ve driven by the place on a weekend night and noticed the overflow crowd spilling out onto the sidewalk. There was no native sound system in evidence, so assume that any musical acts would have to supply their own. With the dÃ©cor and construction of the place being cement floors, hard walls, and resulting cavernous echo, the music would likely be a bit raucous added to the volume of friendly chatter going on. Jim swore he could still hear a song played by the band from last week echoing in the corners — something about “Alabama, where the skies are blue”?

So, to sum it up, the Starving Musicians give this place a “G-Major” because you’ll have a major good time going there, and leave well-fed and happy.

The Eastbound Bar & Grill is located at 10053 Maine Ave., Lakeside. For further info, call 619.334.2566, or visit eastboundbarandgrill.com/
Contact the starving musicians at info@PicusMaximus.com

Kev: A Force to Be Reckoned With