January 2023
Vol. 22, No. 4
Larry Robinson (1949-2013) by Sven-Erik SeaholmApril 2013
Back with a Bang! Java Joe's Reunion at San Diego Folk Heritage by J.T. MoringApril 2013
Book Review: The Philosophy of Modern Song by Bob Dylan by Ted BurkeApril 2013
Rick Nash: Bass Man in Demand by Wayne RikerApril 2013
Mod Revivalists the Trebels to Reunite for 40th Anniversary Show by Jim TrageserApril 2013
If Music Be the Food of Love, Play On: Dually Noted Pairs Fine Food and Fine Music by Paul HomiczApril 2013
Harold in the Land of Jazz by Bart MendozaApril 2013
Sephardic Dance and Music by Yale StromApril 2013
Loretta Lynn: A Special Tribute to the Queen of Honky Tonk by Terry Paul RolandApril 2013
Ben Grace Gilmore: It's All About Building Community by Sandé LollisApril 2013
Advertisements 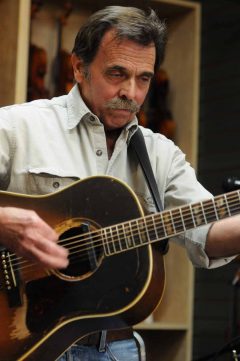 When it comes to describing the terrible loss this world has experienced from Larry Robinson’s untimely death, words come as slowly as a breaking winter’s dawn.

I sift through the dozens of YouTube videos that have surfaced, searching for a way to illustrate that inexplicable spark of love and brotherhood that he so personified, but it only serves to underscore the significance of our loss and places the words even further out of reach.

Maybe a spark seems too insignificant a metaphor to employ. Love was a fire that burned within him. Not like a raging inferno or even a tiny blaze. No, more like a stove’s burner set to low; as if we were are all meant to contribute to the betterment of this world through a gumbo of artistic expression and he was gonna get the rice just right.

The concept of living one’s life as an example to others often comes up when remembering and eulogizing our fallen comrades. When one considers the model of service, humility, and selfless generosity that was Larry Robinson’s life, it’s easy to feel like you’ll never get there. But that’s part of his legacy’s beautiful message as well: That we are there. That our chance to give, to share, to better this world and the lives of those around us exists right now, in this very moment. That’s what all of those wonderfully sly, knowing *winks* he gave were all about.

I was blessed to have shared the stage several times with Larry. Enough to where I had to ask him not to point to me every time the solos came up! I got to record and produce his album Cadillac and Trailer (www.cdbaby.com/cd/larryrobinson2), as well as a subsequent EP of cover songs he light-heartedly referred to as Timeless Classics (www.soundcloud.com/kitschandsyncproduction/larry-robinson-my-blue-heaven). It would be so easy just to fill the rest of this space with all of the tales and anecdotes he would tell me during breaks. Many of them started with the phrase “I’m gonna get just a little bit more of this excellent coffee and then I’ll tell you about…”. Most of them were yarns that could only be spun from a long, winding path of personal experience, although oddly, he never mentioned to me that he was in a band with legendary drummer Russ Kunkel (James Taylor, Carol King, Jackson Browne) called Things to Come, which was signed to Atlantic Records, or that he had shared the stage with the likes of Cream, the Doors, and the Byrds. Or even that he knew ‘Mama’ Cass Elliot.

Maybe he just saved the best stories for his songs. His crystalline character focus, panoramic imagery, and taut emotional thread were all hallmarks of his masterful songwriting.

Rendered in his rich, melodious baritone and laid down over a rhythm that bassist and friend Paul Beach describes as “big and wide enough to land a 747 on,” Robinson’s songs were weighted with wisdom and insight: “Ophelia” who’s faded R&B heroine is Dressed to kill/And she probably will/At least no doubt/Knock some poor fool out, the “Black Cowboy” who was Ridin’, ropin, singin’/Fightin’ and wearin’ guns/Herdin’ and brandin’ cattle/There when the west was won, and the passion-fueled imagery of “Next to You” — Drivin’ down the highway by the ocean/Motor runnin’ hot, hearts beatin’ fast/Young love is filled with such devotion/Each one hopin’ that the love will last. All of these characters were given such luminous… life.

It was something Larry paid particular attention to, as Paul Beach confirms:

“We were mastering his Old California Town album (www.cdbaby.com/cd/larryrobinson) with Gavin Lurrsen (T-Bone Burnette, Steve Earle, Crosby, Stills & Nash) and and Gavin’s messaging all of these famous people and he turns to Larry and he says, “Man, you really know how to tell a story.” I know that meant the world to him, such high praise coming from a guy who’s worked with the best of the best. Larry had a huge smile on his face all the way home.”

What remains most evident in Larry Robinson’s legacy is his loyalty to his family, his friends, and the ideal that music was a thing to be shared; not just with the audience, but with his fellow musicians, too. This was evidenced by the many open mics he organized and attended at Fallbrook’s the Packing House and the Valley Fort and Sorrel’s in Temecula. Even at his own shows, if he knew you played, he’d probably invite you to join in. I’ll let Larry have the last word on that:

Like “Play the music right
And that’ll make everything alright
Tonight.”

Now, I’ve been around
Hangin’ out downtown, right here for years

Thank you Larry for the laughs, the love, and the reminder that music is nothing without the folks who care for and nurture it. Please save us a spot at heaven’s open mic. A whole bunch of people want to play with you again.
Sven-Erik Seaholm

Old and New Friends Come Together for GATOR BY THE BAY

The Starving Musicians: Where to Eat in this Town