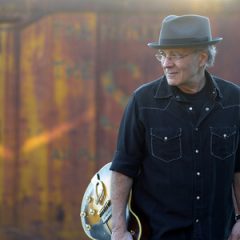 First there is the guitar, an electric, laying out a bass note/treble note ostinato. And there is the thump-pat-thump-pat of hard-soled shoes stamping on plywood. The harmonica fills out the sound, and Ray Bonneville leans down to the microphone with a song. The lyrics are not inscrutable, but there is a mystery there, something that keeps things from being too obvious, something that keeps you listening.

To call Ray Bonneville a one-man-band, with its connotations of novelty acts, would be way off the mark. He’s more of a self-contained band, providing all the bass, percussion, accompaniment, and vocals. Though he fills out the sound with his four-instrument performance approach, there is something spare about his styling. He’s not going to overload his listeners. He has been called a bluesman, and though many of his songs have a bluesy quality, his influences reflect a musical cornucopia that he has picked up or been exposed to as he performed in clubs, bars, and music venues across the North American continent. His mix of music has been called a “gumbo of American roots stylings,” with vocals that are described as “weathered.” One critic colorfully described Bonneville as a “mixture of gunpowder and opium,” whatever that might mean. Some folks say that he reminds them of Leonard Cohen, and other folks mention Bob Dylan’s name.

Bonneville’s fan base centers in Texas, where the Canadian native now makes his home, with other fans extending throughout North America and Europe. His first album, On the Main, was released in 1993. In 1999 his CD Gust of Wind earned a Juno Award, which is the Canadian music award in recognition of artistic and technical achievement. Some folks call it the Canadian Grammy.

An often-sought out musician, Bonneville’s dance card is filled well in advance. He performs more than 100 shows a year throughout the United States, Canada, and Europe and has shared the stage with B.B. King, Muddy Waters, Robert Cray, and Mr. Gris Gris himself, Dr. John. He is a staple at many music festivals. He has performed at the New Orleans Jazz and Heritage Festival and the Montreal International Jazz Festival.

On a cloudy Texas morning, Ray Bonneville told me a bit about his life and music. Bonneville was born and grew up in Montreal until the age of 12, when his family moved to Massachusetts. It was an abrupt transition for the French-speaking youngster, who started in the school system without the benefit of the English language.

The story goes that Bonneville’s grades subsequently suffered because of his language difficulty. He took refuge in music, picking up the guitar when he was 14. After high school came the Marines and being shipped over to Vietnam. After his stint in the service, he wound up living all over: Colorado, Seattle, Alaska, Paris, and New Orleans. His day job resume reflects a similar grab bag of occupations, including driving a cab.

Singers tend to fall into two camps when it comes to guitar playing. There are the strummers. Bob Dylan strums his guitar, so does Emmylou Harris. And there are those who back themselves up with the gentle arpeggios of fingerpicking. Bonneville lies outside this dichotomy, employing a unique thumb/index finger groove picking that has become part of his signature style. His right thumb works as his bass player, and the index finger fills in the chordal backup. He says, “I was in Colorado playing in a duo called the Blue Birds. I sang and played harmonica. I looked over and saw how my partner was playing with the thumb and index finger of his right hand and I thought, ‘If I could learn how to do that, I wouldn’t need this guy.’”

Bonneville dropped the partner, picked up a guitar, and set about teaching himself the thumb/index finger style. There was one catch: he was a novice and realized that it would be a while before his chops were really up to snuff to put himself out there as a pro. He headed to Alaska, reasoning that the 49th state of the Union lacked the entertainment allure of Las Vegas, New Orleans, Los Angeles, Austin, or much of the rest of North America. In other words, Alaskans, with more caribou than cabarets, might be starved for entertainment and be willing to give a performer a little leeway, the musical benefit of the doubt. Bonneville’s assumption proved correct, and Alaskans gave him and his new musical technique a warm reception.

The move to Alaska and new guitar technique prompted Bonneville to add the two pieces of plywood that he stamps with his feet and gives his music a bit more of a groove. As he explains it, one foot works as something like a bass drum and the other works as something like a snare drum. “I played one time on a porch that had a wooden floor, and I could hear how good it sounded,” he says. “And I figured that my foot is going to be tapping anyway. I might as well use it. And really, it’s already part of the sound.” He works the percussion to add that bit of rhythmic je ne sais quoi that his songs have. “I try to mix the percussion in subtly. I want people to hear it but not notice it.”

Filling out his sound is his harmonica, which he plays on a rack, the way Bob Dylan played the instrument back in the “Blowin’ in the Wind” days. Bonneville explains how he gets his distinctive big, rich sound. “With a saxophone you have a mouthpiece with a reed in it. That’s all that a harmonica is, a mouthpiece with reeds. When you play the harmonica, the instrument is actually your body. If you think, ‘I’m a cathedral. I’m a concert hall,’ it changes your embouchure. You can get a much bigger sound,” he says.

Unusual for a singer/songwriter, Bonneville did not pen a song of his own until he was in his forties. When I asked him why it was that he started writing songs at the age when baseball players retire, he replied, “Well, it’s a long story.”

“I was in the military in my teens, so I was 28 when I would run out of the GI Bill. I needed something, so I went to flight school,” Bonneville says. “I flew airplanes for ten years, throughout the nineties in Canada. I was flying for some moose hunting during bad weather, and I scared myself half to death.” The scare was too much, and Bonneville left his flying career. He devoted himself full-time to his music and began writing songs. “It’s also that my original language is French and it may have taken all that time for me to get comfortable with English to write songs in English.”

Bonneville has said in the past, “I played for 20 years before I ever wrote a song or made a record, you know. And I was playing other people’s music, but I was always kind of changing it and making it my own style in a way. Consequently, when I started writing, I had a kind of style that was already developed. You see things and you hear things and you witness things, or you overhear conversations, and they somehow go in and then they come out in a song later; I really don’t understand it.

“In the beginning my song lyrics weren’t that sophisticated. Mostly they were blues based and had the same themes as you hear in blues songs. But my second CD was more poetic and the third was better,” he says. “I like to tell stories—stories about people on the edge, criminals, and those at the edge of society. I don’t know why that is. I think people like to feel danger but still be safe. My songs are like that, but I like to leave people at the end of a song with some hope.”

His latest CD is testament to his greater songwriting abilities. The song “Tender Heart” is simply that: a song about the everyday heartbreaks that we all endure. Bonneville speaks at least from some experience as he depicts the down side of drugs and addiction with “Codeine.” Similar to Randy Newman and Mark Knopfler of Dire Straits fame, Bonneville can also place the listener in the shoes of a character or narrator. “The Day They Let Me Out” is a phone conversation between a jailed man and his brother. As the song progresses, the story unfolds about the brothers’ relationship and much more.

Bonneville likes to let a song churn around and develop. He’ll spend months and months collecting lyrics on his phone. “My influences are anything that I like. It could be a movie or conversation,” he says. “I don’t write for myself songs should be palatable to the listener. I want people to listen to one of my songs and say, ‘This is my song.’ You have to leave out things and let the listeners’ subconscious fill in the details.”

Ray Bonneville will make an appearance on Saturday, February 15, 7:30pm, as part of the AMSD concert series, located at the Sweetwater Community Church, 5305 Sweetwater Rd., Bonita.