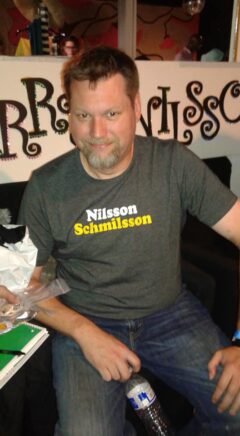 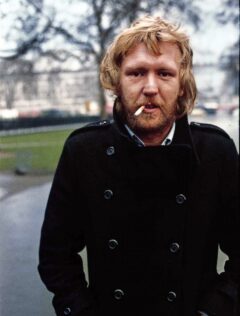 It’s hard to imagine a world without Zak Nilsson. Then again, it is hard to lose anyone who embodied so many virtues as this gentle friend. He loved life with good humor and common sense. He walked through his own elusive moments with humility and kindness. He walked in the footsteps of famous people beginning with his father, Harry Nilsson, whose story is dubiously scattered with the peaks and valleys of success and self-destructive failures. But Zak was different. He was a self-proclaimed computer and gaming geek. He never lost his own sense of love for life and the people he encountered during his short time here. In this way, Zak was his father’s son, very much a good soul who carried on with honesty and courage.
Zak died in early March after a long battle with colon cancer. In the aftermath, the Nilsson family released the following statement,
It is with a heavy heart that we announce the passing of our dear brother Zak Nine Nilsson. Zak was a talented musician and a generous soul, and he loved sharing his memories of dad with the world. We are comforted that he is at peace, though we will miss him so. We love you, Zak.
During the period between his diagnosis and death, Zak was an unusually open book about his struggles as he moved toward his own mortality. His feeling was that if he could offer anything helpful to others through his honesty about death and dying and cancer prevention, then he wanted to leave behind a record of these final days. And that he did. Many of his followers on social media were treated to what he termed “Canceroke” concerts as he told stories and sang his favorite songs. In defiance of death, he dyed his hair into a colorful array and sported a decidedly ’80s punk hair-do. The humor held even as the days and cancer reports grew more discouraging. Even then, he added animation and special effects in the report production, which gave the news an appropriate sense of the sometimes macabre and dramatic nature of his ongoing reality.
He even shared a private letter sent to him from Sir Paul McCartney thanks to a report from rock-poet and Beach Boy collaborator, Stephen Kalinich.
Paul McCartney here. Steven Kalinich wrote to me to let me know that you are about to have chemo, so I am sending you this note to encourage you to be strong and positive.
I was privileged to know your Dad, whom I knew as a lovely guy and a great talent. I wish you the very best of luck with the treatment. My wife, Nancy, went through it years ago and stuck with it even though she hated it. She is now better and well, except for the fact she is married to me!!
Sending the very best vibrations to you. Be well. Love Paul. 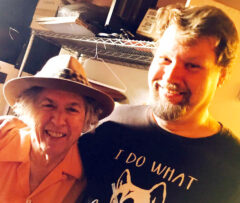 In my world, Zak Nilsson was an open-hearted friend to musicians and fans. He was generous with his time and in his willingness to share his love for his famous father. He was a hybrid of Harry’s son and his biggest fan. For small venue producers and promoters (like me), he was a source of support for Beatles and Harry-related shows and tributes. He usually came to events wearing a Nilsson fanboy rock t-shirt. It was the attire he wore that seemed more like a part of his soul than an outward sign of hip decor.
I first met Zak at the monthly shows called The Roadhouse Series, which I produce in Altadena, California. The night Zak participated was a tribute to John Lennon on his memorial birthday. He performed a spirited and astonishingly good version of “The Ballad of John and Yoko” on his electronic drum kit. During the break, he casually described to me how he went with Harry to England in 1991. He told me about how they spent a weekend visiting George, Olivia, and Dhani Harrison at their home in Friar Park, Harrison’s Victorian mansion in Henley-on-Thames, England. It was one of those times that shined in his memory. A time for Zak and Harry the way he always wanted it to be.
Even though Zak was a professional who maintained a career outside of the music business, it was living in the shadow of Harry Nilsson that shaped and nurtured Zak’s life. But, perhaps the use of a metaphor like “shadow” doesn’t fully portray Zak’s life and his relationship with his father. There was a lifelong love there between father and son.

It couldn’t have been easy being the son of a famous rock star, especially since during the majority of those years Harry was absent from Zak’s life. The singer-songwriter was closely associated with the Beatles and had a reputation for being the light and life of any party going on in any town he was in. He was also known for his unusual, often quirky musical choices and taking chances with groundbreaking directions in his career. But too often the ground didn’t break for Harry, and his career took a downward turn. By 1980, it was over. Harry’s salad rock-star days had ended as constant drug and alcohol abuse took its toll on a career that began with unlimited promise.
As he grew into adulthood, Zak, all the while, was aware of Harry’s jumps through the fire-hoops of fame, success, and into ultimate domestic obscurity. Zak was raised by his mother but lived his life wishing for more contact with his famous father. They stayed in touch, but Harry had moved on from the blissful days spent with his first-born son in the early 1970s.
In 1976, two years after his divorce from Zak’s mother, Diane Clatworthy, Harry met the love of his life, Una O’Keeffe, a lovely Irish immigrant. Harry’s life was redeemed by the marriage with Una as he settled in the quiet Agoura Hills neighborhood 30 miles from his Hollywood playground. For 18 years, the couple raised six children. They remained married until his death from a heart attack in 1994. 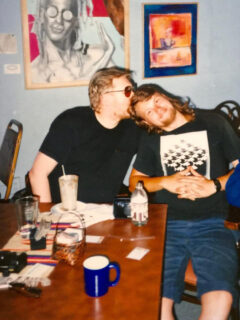 Quality time with father and son.

But through the years, Zak was never entirely out of Harry’s life, but so much time passed by and Harry was at best a distant figure in his daily life. It left Zak to develop his own indirect low-profile place as Harry’s son and as a fan. It was the most consistent way he had of getting to know his wayward legendary father. Zak embraced it with a smile and a tear. He made lemonade and hardly showed a trace of bitterness as the years went by.
According to Zak in an interview in the documentary, Who is Harry Nilsson (and Why is Everybody Talking About Him?), there was irony in his childhood. There’s the “1941” thing that almost mirrored his own life. I’m pretty sure that’s not what he intended it to be. “In 1944 the father walked right out the door. That’s almost exactly what happened except in the ’70s.”
However, in 1991, father and son reunited when Zak received a call from Harry telling him he was going to London to record a song for Terry Gilliam’s film, The Fisher King. Harry agreed that Zak should join him on the trip, which resulted in the final close bonding adventure for the father and son. By then, Harry was in poor health from a lifelong heart ailment. Two years later he suffered a near-fatal heart attack. On his last night in London, Zak and Harry agreed to stay up all night. In the documentary, Zak said, “That would turn out to be not only the first but the last time we’d spend a significant time together. We stayed up all night talking about whatever. That’s a good memory for me.” 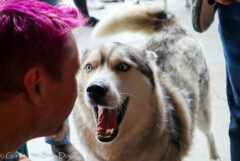 Zak with a husky dog.

Zak’s days would roll by as the love that was nurtured in him by his family, including his absent father, would show itself in his love for animals, especially for Alaskan Huskies. He stayed involved with the Taysia Blue Husky and Malamute Rescue organization (http://taysiablue.com). He adopted Husky rescue pets and frequently expressed his love for Huskies on social media. He was grateful to Nick and Christina Guzman for creating a special film about Zak and his beloved dogs for a music video that is viewable on YouTube. The music is provided by Nick’s rendition of Daniel Johnston’s “True Love Will Find You in the End,” with Zak on vocal harmony. (https://www.youtube.com/watch?v=ebzoEPyQD2k)
Musician and producer Todd Lawrence allowed Zak the opportunity to celebrate Harry at an annual Nilsson Singalong at the Irish pub, Molly Malone’s in Los Angeles. It was an event that closely mirrored the spirit of Harry. It was at one of these shows that Zak performed the song he wrote for his father, the haunting and humorous, “Bigger Man Than Me.”
(https://www.youtube.com/watch?v=4SIGxX5A3Hk), which is available through Bandcamp. 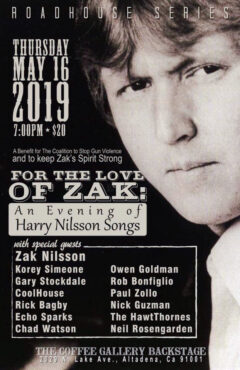 I was also honored to produce a benefit for Zak and a tribute to Harry after his diagnosis. It was held at Bob Stane’s Coffee Gallery Backstage and, at Zak’s request, proceeds went to The Coalition to Stop Gun Violence, which Harry supported after John Lennon’s murder. That night Zak performed “Cuddly Toy” and “Without Her,” with Nick Guzman, Chad Watson, and Beach Boy associate Rob Bonfiglio on guitar as well as Rick Bagby on keys and Owen Goldman on drums. His version of “Without Her” that night was sweet, touching, and vulnerable. It echoed the loss of his father throughout his life and foreshadowed our own sense of loss at the possible future of living in a world with Zak Nilsson. Earlier in the evening, hula student, Melinda Koshimizu, chanted, danced, and presented Zak with a homemade, handmade lei, which in Hawaiin culture, symbolizes love and royalty for the receiver. Certainly, Zak possessed both throughout his life.
“Remembering,” as Harry asked us to do in song, I think back to the doting father that Harry was during his first days after Zak’s birth. It must have been Harry’s love that helped sustain Zak during his final days in this limited time and space we call life. 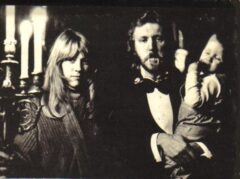 Two-year-old Zak with mom and dad.

One day long ago, while Zak was a newborn infant sleeping, Harry wrote his baby son the following letter for him to read when he was grown-up:
Dear Zak
I stood over you and watched you sleep for 30 minutes this morning. Someday you will know how I feel as I write these words. You are beautiful. You moved your toes and feet proportionally to the noise I made. You were on top of your blanket. An orange blanket with yellow daisies. And your pacifier was an inch from your mouth. It had been obviously released with sleep.
I love you,
Big Daddy Schmilsson
This letter must have been a comfort as Zak surrendered to his own inevitable fate with reluctant acceptance. Along with the pain and suffering, he endured over his last weeks, these words, from his loving father, were sent to him like a message in a time capsule so many years before.
I hope and pray that it was this love that greeted Zak Nilsson as he crossed the mortal bridge and fell into the joyful and healing comfort of his father’s arms.

John Densmore: An Invitation to Dance on Fire

Jazz 88 Keeps Pumping Out the Tunes: Station persists despite numerous challenges over the years, including Coronavirus