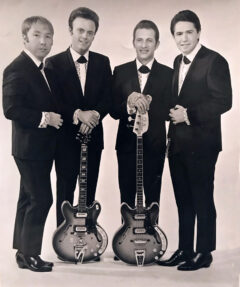 If you recall the Cascades 1962 classic hit “Rhythm of the Rain,” it conjures a gentle scene of a quiet storm by the sea, perhaps with sand blowing on a lonesome shore. A yearning of love lost, far-flung yet hopeful. And so the song breezed by the winter of ’62, and by spring of 1963, it reached the #3 on the Billboard Pop charts (and #1 in the Billboard Easy Listening Charts). It was also an international smash, reaching #1 in Canada, Ireland, Hong Kong, Singapore, and Japan; #2 in New Zealand; #3 in Australia; and a top 5 hit in the UK. For a young Gabe Lapano, that gentle and cascading rhythm pitter-pattered through the transistor radio with a foreshadowing of thunder. Who would have guessed that song would have such an impact on his life, or that an amazing musical journey lay ahead? In 1963 Gabe moved with his family from Spokane, Washington to San Diego. Here, he joined one of San Diego’s most beloved bands from the ’60s: Sandi & the Accents. Followed by the internationally known Cascades (becoming their lead vocalist, arranger, and organist) and then into a career in music—producing, touring, songwriting, performing, and making hit records, he’s had a career that anyone involved in a lifetime of music would be proud.
I was privileged to be able to contact Gabe through a series of email and phone interviews over the course of a few months, and he has been incredibly insightful, helpful, and gracious during the entire process, sharing his amazing life in music.
Andy Rasmussen: First off, can you tell me about your early years growing up and your musical influences?
Gabe Lapano: I started listening to music at an early age, buying records from my favorite artists like Elvis, Fats Domino, Little Richard, and doo-wop groups from the East Coast and Midwest. I started playing piano around the age of 11 and was active in chorus from grade school until high school. Playing organ was a natural progression from piano, but it wasn’t long before I gained confidence in singing. Once I did, I kept expanding my repertoire.
Andy: Do you recall the first song you ever wrote? Your first band?
Gabe: Wow, that’s a good question. I can’t recall the first song I actually wrote, but I must have been around 15. The first band I was in was the Dominotes; we were around 14 or 15 years old..
Andy: When did you come to San Diego? And how did you join Sandi & the Accents? How were those early times? 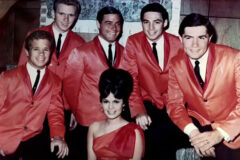 Gabe: I didn’t join Sandi & the Accents until around 1964 during my senior year at Helix high, the first year after my family and I had moved from Spokane, Washington. I was in chorus class with Linda Young (original singer for the Accents) and was just playing a few notes on the piano. She heard me and asked me to audition for the Accents, which I did. Linda eventually left the band, and Sandra Rouse joined, becoming their featured vocalist. I enjoyed the Accents’ musicianship and the songs they were playing. We rehearsed about once a week and we always had direction as to what we wanted to rehearse the next week, keeping it fresh and current for our audience. We usually rehearsed at [drummer] Tony Johnson’s home or my folks’ garage. It was always a fun, intense, and rewarding experience.
Andy: Sandi & the Accents quickly became one of San Diego’s top bands during that time. From May 1964 to May 1966, they released five singles on various labels (Commerce, Challenge, CRC, Liberty, and Karate), all produced by Andy DiMartino. How did the band get to know producer Andy DiMartino? Did he encourage your songwriting?
Note: Andy DiMartino eventually became Sandi & the Accents’ manager as well as producer on their records, eventually securing distribution for them on the Challenge label after their initial single with Commerce. He was instrumental in getting their singles released on larger labels, most notably Liberty Records. 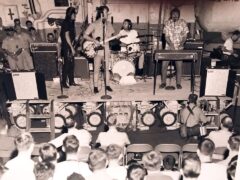 The Cascades on the USS Hancock performing in the hangar, USO Tour, 1968. 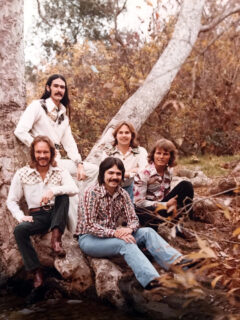 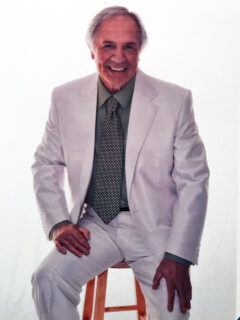 Around 1975, after doing solo and casual work with different groups, I put together another configuration of Gabriel. We played a San Diego club called Spanky’s for a while and recorded a single called “The Bump” on the Artists of America label. It was a great band, as all the players were fun and excellent to work with. We did an album with engineer Larry Owens, but it was never released. After the Spanky’s engagements, I met singer/bassist/percussionist David Calderon. He had a wonderful voice, and we started a duo that lasted about a year, performing at the El Cortez Sky Room. We did that from about 1976 until about 1977 when my son was born.
Note: In 1981, Gabe moved with his wife and family to Elk, Washington, where they still reside today. He lives on a small country farm, complete with five horses, chickens, goats, and koi in the pond. He keeps busy performing and, prior to Covid restrictions, was performing up to five nights a week. When not working, he has a home studio, where he continues to write songs and work on his latest recording projects. He is currently working on a new solo project, which is set to release the Gabriel album from 1975, appropriately titled Gabriel ’75. Email him at GabeLapano@gmail.com.