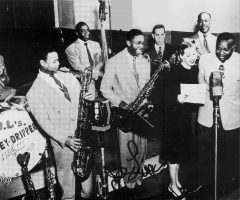 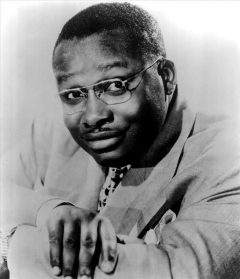 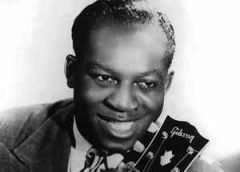 Although they were both born in Oklahoma (Joe in Guthrie on July 9, 1915, and Jimmy in Newby on October 14, 1922), band leaders Joe and Jimmy Liggins relocated to San Diego as youths. Revered by lovers of jump blues, swing, and R&B, they soon began their musical apprenticeship in the local clubs of 1930s. As all brothers do, they had a friendly rivalry, which led to an incredible series of hits during the early fifties.

As teenagers and still at Hoover High School, they played the local night spots, with Joe eventually joining the house band at the Creole Palace circa 1934. By all accounts this band was at the forefront of San Diego’s first musical renaissance and, at one time or another, included such soon to be legends as Fro Brigham, Harold Land, and Little Willie Jackson just to name a few. The Palace itself was located in the Hotel Douglas at the corner of Market Street and Third Avenue and, in the name of progress, the building was demolished in 1985.

After years of playing the local circuit as well as dates up and down the coast, Joe eventually headed to the greener pastures of Los Angeles in 1939, gigging with a variety of groups, notably Sammy Franklin’s California Rhythm Rascals. No, really. Matter of fact it was that group’s decision to pass on one of Joe’s tracks—his soon-to-be debut smash, “The Honeydripper Parts 1 and 2,” which enabled Joe to go off and start up his own outfit.

In 1944 he signed up with indie Exclusive Records and never looked back. His sound was a smash from the get-go, starting with the afore-mentioned track (Exclusive 207). It was an instant R&B number one (for 18 weeks!!) as well as the biggest R&B record in 1945. But perhaps most important, “The Honeydripper” has been cited by many as one the earliest examples of what was pointing toward what we’ve come to know as rock ‘n’ roll.

Joe racked up an amazing ten hits between 1945-48, including “I’ve Got a Right to Cry” (Exclusive 210). In 1947 he guested on his bandmate Jackson’s solo album and when Executive Records folded in 1950, he jumped to Specialty Records, continuing his hit streak until 1954. He scored another R&B number one single with the classic “Pink Champagne,” which was heavily bootlegged at the time. He then followed it up with a tour as part of the Big Four R&B Revue alongside Jimmy Witherspoon and others. He switched labels to Mercury in 1954, the same year he took part in a benefit for the wife of Stan Getz, and in 1960 he put out a best of, using remakes, before being transferred to Wing and then to Vita. But by then his star had faded.

Younger brother Jimmy was indeed a band leader, but he was also a professional boxer. Notably, he trained with another local legend, pugilist Archie Moore, whose infamous boxing glove-shaped pool can be still be seen off the freeway near the juncture of I-15 and I-94. He started out as driver for his brother’s band but soon formed his own band, the Drops of Joy, signing with Specialty Records in 1947. He scored a top ten hit in 1948 with “Tear Drop Blues” and followed up with “Don’t Put Me Down” in 1949. Jimmy switched to Aladdin in 1954, recording his classic “I Ain’t Drunk” as Jimmy Liggins and his 3D Music for the label.

His brother would join the imprint in 1950, but by the turn of the decade Jimmy found himself label-less, so he did what any good artist has always done in this sort of emergency—he started up his own label, Duplex, which ran from 1965 to 1978. The brothers recorded two duets for it in 1965, but their hit days were well over. They continued to release recordings on their own imprints, with Jimmy also recording blues for Duplex under the name Big Moose McDowell and the Tornadoes. He eventually opened a music school in Durham, North Carolina in 1975. Sadly, Jimmy passed away on July 18, 1983.

Although the brothers’ music was no longer selling at the rate it once did, it’s important to note that their hit tunes continued to emerge in new renditions, with Joe’s tunes being covered by a range of artists, including Hank Williams Jr., Dr. John, Mose Allison, and many more. Jimmy, for his part, attracted the likes of Albert Collins, Canned Heat, and Doug Sahm, to name just a few. In 1981 R&B fanatic Robert Plant borrowed the Honeydrippers’ band name for a successful recording and tour, though Joe Liggins continued to tour with his own Honeydrippers. The BBC even filmed one of his concerts for a TV special in 1983. Joe Liggins continued to tour until his untimely death on August 1, 1987.

Luckily for music fans, The Liggins brothers’ music has been extensively re-issued, experiencing a serious resurgence in popularity due to the swing revival of a few summers back. One of the earliest precursors to rock ‘n’ roll, and it has its roots right here. Who’d a thunk it?

A Darker Side of Donovan