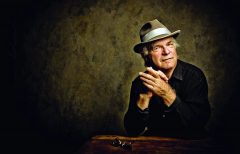 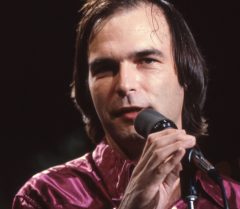 Olney in his younger days.

On January 18th singer-songwriter David Olney died. In the days that followed Olney received more publicity in one day than he did during his entire 50-year career. There was no mention of the variety of ways he brought songs to everyday people. No mention of the legacy of songs he left behind or the family and friends who would mourn for many days and years to come. It was simply that he died on stage in the middle of a song. He simply raised his head, said, “I’m sorry.” He then bowed his head and quietly died of a heart attack. It was like a current of an angel’s wind swept through him and released his spirit, free to fly. This amazing man who embodied a universe of imagination in song and art left us in that moment.

In his final days David Olney’s lifestyle was like the tradition of great American legends. His life moved with a rhythm that could be compared to a mixture of Johnny Appleseed and John Muir. During his final year he grew a beard that strengthened his resemblance to past American heroes of folklore. The beard was thick, long, and white, a sign of his 70 years of life. He looked like a troubadour version of John Muir. Like the real-life Muir, he was constantly curious about the world around him. This childlike curiosity, known in Zen as a “beginners mind,” is a gift that increased his creativity. That he was able to translate this into a song, a play, a sonnet, and a story is part of what defined him.

But who was David Olney? The answer is both simple and complicated. He was born in 1948 in Rhode Island, but as a resident of Nashville in 1971, he adopted the deep South in mannerism, life style, and manners, not to mention a style of narrative that that one would compare to Flannery O’Connor and William Faulkner. His recording career as a solo artist began in the 1980s. In his life time he would attract a friendship with Townes Van Zandt among many others. His songs would be covered by Linda Ronstadt and Emmylou Harris.

He was not the self-destructive kind. His style as a writer, vocalist, and guitarist are reminiscent of Townes Van Zandt. But he had a strong will to live and to grow as a human and a songwriter. In this he represented so many other talented veteran songwriters who quietly work away from the floodlights of fame. His devotion to the song and his imagination that illuminated them, showed how they can be integrated into ordinary life expressions and experiences. This is what set him apart from other artists. And according to his friends, it was with a gentle touch empty of ego that made his observations of this life so poignant and timeless.

Along the way, he was not just gentle. As his website states, he “blended tenderness and ferocity, theatre and sincerity, agitation and embrace.” A listen to his albums beginning with his first, Eye of the Storm (1986), reveals how far he traveled in style and theme. Always original, especially in the narrative perspectives of the songs, the album opens with “Saturday Night and Sunday Morning,” where he imagines himself as Saturday night and his lover as Sunday morning and dreams of their brief moment of union at midnight. Then, his sophomore album, Top to Bottom, includes a fiery rocker, “Big Cadillac,”that storms and rages. Other albums bring in old-time blues, jazz, and folk music as clear influences.

One example of his ambition in theme and the originality of his narrative is the 2012 release, The Stone. The six-song album tells the story of the last days of Jesus Christ from his entrance into Jerusalem to his crucifixion on Golgotha. The perspective changes with gem in this song-cycle. He begins with a con man’s take on Jesus on the now classic, “Jerusalem Now.” “Brays” describes Jesus’ entry into Jerusalem from the point of view of the donkey. It’s such a unique view of an ancient story that brings the familiar tale alive in a fresh way. But, this not sacred gospel music. It’s as real as the dirt beneath the Palm Sunday donkey’s hooves. Olney uses poetry, folk, blues, and roots rock as his musical medium accompanied by lyrics that breathe new life into the soul of the story. This was what David Olney capable of creating in song. He brought life to commonly told stories. He brought ordinary magic to everyday events in daily life through the alchemy of words and music. This was the gift that filled his life and creativity.

So, who was David Olney? Perhaps it is better to ask the question, who IS David Olney. Through his songs, albums, sonnets, stories, and life-lessons captured on the video series You Never Know, he is still present. In fact, he is more alive than most politicians we see daily on television.

But, mostly he was a human whose original spirit grew his own unmatched legacy. Sometimes, he was so ahead of everyone else in the American songwriting community, it seemed he was pointing the way like Moses leading artists out of their isolated mediocrity.

When he passed away at 71 it was too sudden for his audience and this world. Another 20 years of life would not have gone wasted on him. He celebrated life through music and a creativity that needed to be expressed. He had a songwriter’s life-wish that was unique in and of itself. That wish was not just to live a full life, it was to pass along the same creative impulses and dreams that drove him for 71 years.