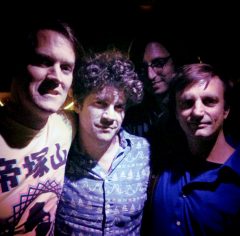 A common and not entirely unjustified lament amongst music lovers is that nobody makes music like they used to. Modern digital technology gives artists and producers an infinitely more capable set of tools than was previously available, but it is this greater flexibility that often undermines the work ethic and sense of craftsmanship that gave us the most timeless recordings of the past. Functions like quantize and copy-and-paste can seduce music producers away from the perseverence required to capture that one perfect take in the studio. The vibe of great musicians laying down killer tracks can give way to sterile technical perfection.

And then there is the Electric Arch, a New Orleans group led by James Marler. An English professor at Tulane University by day, he is also a heavyweight in the indy music scene. He fronts Rotary Downs, a well-regarded band with a history of releases dating back to 2001. Their acclaimed album Chained to the Chariot was featured on NPR and contains tracks that chronicle the devastation of hurricane Katrina and its aftermath. Much like the city of New Orleans itself, the project rebounded from great adversity, as the master tapes had to be rescued from the storm. Finding a safe haven in Lafayette, the producers were ultimately able to bring the album to completion.

A prolific tunesmith, Marler composed songs that he deemed outside the context of Rotary Downs and formed the Electric Arch, which he regards as “my outlet for the songs I write on my own at home.” Named after his dog Archie (full name: Archibald MacLeish, “but I call him Arch sometimes”) the band is a fully realized recording and gigging outfit in its own right. Their new release, Out of Range, is an infectious collection of retro-flavored pop songs. Well-crafted melodies and catchy hooks are woven into dense, often psychedelic arrangements throughout its run of 11 tracks. “The album started from a pile of demos I’ve had around for a while, but they took many twists and turns as Matt [Cloutier, producer and engineer] and I put them together. Some, like ‘Crisps and Crackers’ and ‘Granada,’ were arranged from a few parts during the recording process, while others, like ‘Postcard to Celeste’ and ‘Can’t Stand It’, were completely written before we recorded them.” Giving credit where it is due, he emphatically states, “Matt Cloutier engineered and produced the whole record after initially just dropping by to share some recording knowledge. He was somehow able to translate my abstract requests into exactly what I wanted or something better. He also played all the drums and wrote some crucial bass lines—and a bunch of other great parts. Sometimes his brother Trey would stop by to lay down melodies or texture on his Juno or Korg keyboards. Trey was also crucial as a keen set of ears, and [he] helped get us unstuck on several mixes. My friend Alex Smith is a much better bassist than I am, so he laid down solid takes as needed, which was frequently.”

The tracks for Out of Range were recorded in the attic of a mansion from the turn of the last century, using classic gear from the ’60s and the ’70s. As the album’s press release states, Marler’s compositions were produced and arranged by Cloutier in sessions that were “fueled by fish sticks, beans, beer, and tequila, typically begun in the late afternoon and ended just before sunrise”. Taking inspiration from ’60s French pop, surf music, and garage rock, the music on the album comes across as a contemporary incarnation of the era when songs were crafted by hand and unbridled creativity was at a premium. Indeed, guitars drenched in distortion and tremolo take point alongside vintage keyboard sounds in the sonic assault. “We used mostly old gear, like an Audioguild Grand Prix amp from the late ’60s, an even older Guild Starfire guitar and Fender Super amp, a short-scale flat-wound club bass, a MultiEcho MultiVox tape echo, and a Yamaha CP70 electric piano from the mid-’70s.” He enthusiastically relates how “the producer immediately loved the British drum kit from the early ’60s that I got on Craigslist a few years ago, and he was able to capture great tones from this old cocktail kit. The brand is John Grey, and the model is Autocrat—an amazing name for whoever’s sitting at the drum throne!”

Disconnection and disentanglement are recurrent themes in the lyrics. “I usually approach songs like short films, so lyrically I’m just trying to convey the feeling of that film as experienced by me or through another narrator. Some of them feel oddly personal or emotional to me, like ‘Granada’ and ‘Crisps and Crackers’ for some reason, but others, like ‘Las Ramblas,’ might follow a sort of noir character or someone I met in my travels, like in ‘Postcard to Celeste.’” When asked which artists he considers to be influential, Marler references those acts whose songs the Electric Arch covers in their live act. He singles out Os Mutantes, the Velvet Underground, France Gall, the Beatles, and the Kinks. At times, the vocals on the album echo the breezily effortless delivery of a young Ray Davies. “We also tried to summon Antonio Carlos Jobim, Leonard Cohen, and Serge Gainsbourg in a couple places on the record. We were definitely going for smaller, soft-around-the-edges type sounds as much as possible.”

The Electric Arch performed live in Southern California last fall, ably anchored by their West Coast drummer Ron Bocian, who is known around these parts as the drummer for the Euphoria Brass Band. According to Marler, “We usually show up knowing our parts more or less, do a rehearsal, drink some tequila, then get on with it! Ron’s a great drummer with a great feel, so it works out. He got me into surfing a while back, so I always get out there when I’m on the West Coast and show the locals what terrible surfing really looks like, bayou-style.” Shaking off an unfortunate encounter with a stingray, Marler still managed to put on a great series of performances with the band, though he did require medical attention upon his return home. “Shortly after that trip we did a show in New Orleans with Tropa Magica (from LA) with Matt on drums, which was fun. Some local youths got a pit going on (the songs) ‘Panis Et Circenses’ and ‘Western Civ,’ so it was a total success.”

As he and the band prepare to embark on another foray to the western shore, Marler confesses, “I love California but I’ve never lived there. It’s its own country, as they say—ocean, mountains, desert—keeps it rockin’, knows how to party. We called last year’s sojourn on the West Coast the Hang Ten Rock ‘n’ Taco Tour and that turned out to be accurate, so we’re hoping this year’s Taco Tour 2 honors its commitments as well, minus any additional attacks from below the sea. We’re excited to play some more shows in California, then do the record release in New Orleans. We may go to the East Coast after that, then I have a lot of new songs to record, so I’m planning to have another album done in the spring.” In the end, it’s all about the music and James Marler never loses sight of that. “Writing songs, or even just parts, is by far my favorite part of being involved with music, especially when it all comes together and kind of puts you in a dream mode for a while. As for everything else that comes with putting your music out there, I just feel my way through and when one door closes I look for another one and knock on it.”

Susan Werner Lets Her Heart Do the Talking

The Legacy of Tony Bennett