January 2023
Vol. 22, No. 4
Record Store Day 2019 by Leonard SciutoMay 2019
Notes on On the Beach by Neil Young by Ted BurkeMay 2019
Beehives and Hand Claps: The Enduring Quality of Girl Groups by Steve ThornMay 2019
Wow by Moby Grape May 2019
Odyssey & Oracle in Wax (or how I found my groove) by Andy RasmussenMay 2019
School Girl Crush by Sandra CastilloMay 2019
Passing the Torch by Brendan BoyleMay 2019
Advertisements 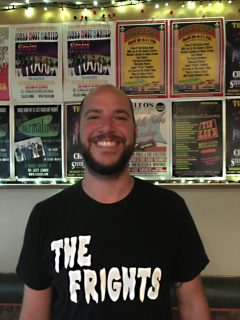 To those who don’t collect records, this probably looks like the beginning of a police report. But for us vinyl junkies, this is just another typical Record Store Day morning. What is Record Store Day, you ask? It’s a special day that happens once a year in mid-April when the record companies and recording artists release hundreds of limited edition albums, box sets, EPs, singles, and merchandise to collectors all over the world. Each record store places their orders, but unfortunately with the limited amount of copies, there is no guarantee on exactly what they will get and in what quantity. So what do you do? You pick your favorite store and you camp out until they open. You make friends with the folks next to you in line. You exchange your top picks for when all hell breaks loose, so that maybe if they see something first or in multiple quantities they can snag it for you. At least, that is what you hope for.

2019 marks my eighth year participating in Record Store Day, and in all the eight years I have been first in line only once, but I have always been in the top five. This year would prove to be no different as I parked my car right in front of Folk Arts Rare Records. From the driver’s seat I can see two people cocooned in sleeping bags and another woman sitting in a lawn chair, listening to music on her earphones. Fourth place isn’t bad, so I grab a couple of lawn chairs from the back of my car and set them out for Sergie and myself. Sergie has been my curbside roommate for the last four Record Store Days and even though saving places in line is frowned upon, I knew he was only a few minutes behind me and it would most likely be an hour before anyone else shows up.

Sergie pulls up and sits down next to me. “Fourth and Fifth this year! Not bad!” he exclaims. “I recognize those two from last year.” He’s referring to the couple in the One and Two spot. I don’t know how he knows it’s them but a few hours later when they emerge from their slumber, I instantly recognize them. My Arch Nemesis. I say this in jest because we are all a community, but at the same time this is a competition. When push comes to shove, and it usually does once the doors open, we are all trying to acquire the same thing. We are all trying to get our piece of the Holy Grail. I make note of my rival, trying to cram the memories of past RSDs into the corner of my mind when he had snaked records from me before.

As the sun starts to come up over Normal Heights, spilling onto El Cajon Blvd., a few more collectors start to show up. Faces are remembered but not names. I throw out a few head nods to those I recognize. It’s about this time that the lists start to get revealed. Sergie is going big this year and has a list of about ten albums he really wants. My list is fairly modest. I have five records that I deeply want. Sergie and I each have copies of our lists. We learned pretty early on that teamwork is key if you’re gonna score the most coveted albums of the year. My list goes as follows:

I am immediately encouraged when I eavesdrop on my Arch Nemesis; he is telling the woman in front of me his list. As I ear hustle, I don’t hear any of my records in his top picks. Finally! This is going to be a successful Record Store Day and as long as the store stocked the vinyl, they will be mine.

It’s now about 7:30 am. The line is at least 30 deep. Sergie and I put the chairs back into the trunk of my car. The countdown has begun. The store’s proprietors show up, unlock the door, and start setting up for the eminent melee. At around 7:50 Brendan, the owner, comes out to greet us. He explains the layout of the store, asks everyone to behave and thanks everyone for choosing his place to celebrate RSD. Then the little hand lands on the 8, and it’s go time.

The top five head in: my Arch Nemesis, his girlfriend, the woman in front of me, myself, and Sergie. The plan is to take the outsides, Sergie hits the back end while I start at the A’s, working together to meet in the middle. Fingers flipping through records can go pretty fast, so I tail my rival, studying every cover that passes. Already I notice that I can’t find the Bone-Thugs album. Oh well, that’s just one. I do however snag the Devo Boxset on Sergie’s list. Score! On to the next crate, still practically breathing down my rival’s neck. He’s already got his hands full with vinyl while mine are completely empty. But its okay, I still have four fantastic records on my list. His pace is quick so I make sure to pay attention, and just at that moment I see the Bill Evans record. And, better yet, my rival has passed it up. I say to him politely, “Hey, lemme get that Bill Evans.” He flips back a few records, looks back at me, and says, “Oh, sorry it’s the only one,” and adds it to his stack. My heart sinks into my stomach… Dammit! That was my number one! Now, I understand he was there first, but it’s an unwritten rule that once you pass up a record it’s fair game. But it’s also Record Store Day, and this jerk has never played fair. I decide at this point that if I’m going to walk out of here with any records I’m gonna have to jump crates. Luckily Sergie was able to get me a copy of The Crow soundtrack. That’s one.

Flipping through the next crate I’m disappointed to find out that neither the Otis Redding nor the Billy Joel are present. The dream of walking away from RSD triumphant is now looking bleak. Frustrated, and frankly ready to pop my Arch Nemesis in the face, I focus on Sergie’s list. I find him the Janis Joplin Live at Woodstock along with the Sly and the Family Stone Live at Woodstock albums. Sure enough, there are two Sly albums so I grab one for myself. Not on my list, but plans changed and so did my list. Along with that I grab Dr. Dre’s Nuthin’ but a G Thang 12-inch single and the Elvis Costello and the Imposters EP. Neither of them is on my list, but my hopes are dwindling and I need something to show for standing in line since 4:30 am. I am just about to wrap up my search when I decide to go one last time through the first crate. Toward the back of the crate I see two all-white album covers. My heart rate accelerates as I read the front, barely believing my tired eyes. Bone-Thugs-N-Harmony E. 1999 Eternal Record Store Day limited edition first pressing. Yes!!! I didn’t notice it before because it’s a blank cover. I put it on top of my stack, leaving the other copy for some other lucky soul to stumble upon. On my short walk to the register, Brandon is talking to a customer about his favorite album of this year’s group. It’s an original soundtrack recording from the ABC-television series Multiplication Rock, composed and conducted by Bob Dorough. I immediately take one of the many copies he ordered and start humming “Three is a Magic Number” as I shuffle my way to pay for my records.

And what do you know—my rival is in line right in front of me. I give a long exhale and wait as the cashier rings up his mountain of records. At some point he turns to me and looks at my stack of records. He sees the Bone-Thugs album and says, “Oh wow! I didn’t think they got any?” The recent memory of this man’s grubby hands stealing my Bill Evans album is so fresh that I wince a little. I look him straight in the eyes and in a flat tone I say, “Oh. sorry, it’s the only one.” Sure it was petty, but I needed a win. And to be blunt, someone else deserved that album.

I paid for my records and walked out of that record store with my head held high. Triumph has many faces, and even though I didn’t get everything I wanted, I still left with some killer albums. I met up with Sergie outside and we compared how much we spent (he beat me by a couple hundred). Another RSD in the books. Like the losing team in the World Series, sometimes you just have to be happy you’re there and at the end of the day whisper to yourself, “There’s always next year.”

Note: This is the second installment of a new column, celebrating recorded music of all kinds… kinda like Lou Curtiss’ colum but not. It’ll run alternately with “Recordially” and sometimes at the same time. With a revolving door of writers, Contributors can share anything relating to vinyl, CDs, 8-tracks, or whatever influenced them past or present. It could be remembering their fave records growing up, what it’s like to work in a record store, what was played in their houses as kids, or a release of rare music of some kind. Let us know what you think! Thanks for reading!