January 2023
Vol. 22, No. 4
Passing the Torch by Brendan BoyleApril 2019
Notes on On the Beach by Neil Young by Ted BurkeApril 2019
Beehives and Hand Claps: The Enduring Quality of Girl Groups by Steve ThornApril 2019
Wow by Moby Grape April 2019
Odyssey & Oracle in Wax (or how I found my groove) by Andy RasmussenApril 2019
School Girl Crush by Sandra CastilloApril 2019
Record Store Day 2019 by Leonard SciutoApril 2019
Advertisements 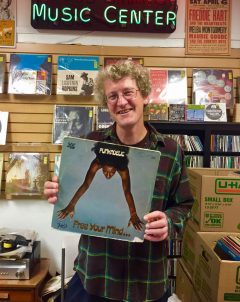 Note: This is the first installment of a new column, celebrating recorded music of all kinds… kinda like Lou Curtiss’ column but not. It’ll run alternately with “Recordially” and sometimes at the same time. With a revolving door of writers, I am inviting them to share anything relating to vinyl, CDs, 8-tracks, or whatever influenced them past or present. It could be remembering their fave records growing up, what it’s like to work in a record store, what was played in their house as kids, or a release of rare music of some kind. Let us know what you think! Thanks for reading!

The Lou Curtiss Remembrance and Celebration, held last year in November, was truly a magical evening, filled with brilliant music and sincere love for a man who had an impact on thousands of lives. The only downside was that Lou could not be there to appreciate his vision in all its splendor. Having a roots music showcase at the old Bostonia Ballroom was his idea all along, just one of his many wonderful ideas.

At the end of this extraordinary evening, Lou’s old friend W.B. Reid told me, “You know it’s your responsibility now to make sure that the poor kids with no money who show an interest have access to the really good stuff for cheap, right?” I was a bit taken aback. There are certain business realities that make this a very tall order.

I know firsthand that in 2018 “the really good stuff,” i.e., records, can be hard to come by, never mind for cheap. But hey, the sentiment is spot on. This is why we’re keeping the Folk Arts train rolling. Sure, I might be the current conductor, but we’re all on this train together. I’m just a goofy skinny guy with funny hair and very little musical talent, but I do know a hell of a lot about music and records. And I and my partners in crime at the current Folk Arts are dedicated to sharing the really good stuff with you seven days a week.

When people are exposed to the stuff that dreams are made of, there are wild and wonderful possibilities for creative output. And, even if they’re not overtly asking for it, young people desperately want to be inspired by brilliant art and music. It’s up to all of us to make a point of exposing them to the musical magic that’s out there. It’s not just on me, folks.

Here, in San Diego, this sentiment is best exemplified by our brilliant jazz scene, where programs like Gilbert Castellanos’ Young Lions Jazz Conservatory plus various outreach programs in our local schools are dedicated to not only exposing young people to “the really good stuff” but teaching them this essential art form. Our local jazz veterans are walking the walk, and God bless them for doing so.

We should share our musical knowledge not only with the young but also with the young at heart. The great folk artist Harry Lieberman didn’t start painting until the age of 74. If you plant as many seeds as possible, something beautiful is bound to grow, and this growth will likely sprout from unexpected places.
,I came of age in the suburbs of San Diego, pissed off at the bankruptcy of modern American pop culture and desperate to discover “the really good stuff.” Let me tell ya, it wasn’t easy and I largely felt like I was on my own. But I was lucky enough, at the age of 18, to discover Lou Curtiss and the whimsical world of his funky, dusty record shop. As long as you were up for asking questions, Lou was very eager to share his wealth of knowledge and then some. I can’t thank him enough.

Lou was an immensely passionate and stubborn musical beacon, and he dedicated his life to the preservation of older American musical traditions. I’ve got the utmost respect for Lou and his countless achievements. I still think he doesn’t get enough credit. The man had a profound impact on my life and countless others. It goes without saying that I’m not Lou. No one can replace Lou. I share his passion for older American musical styles, but I’m also a realist and, admittedly, a bit more open-minded on the musical front. I’m passionate about “the really good stuff,” whatever that may be. Modern musical luminaries like Moondog, Judee Sill, and Art Tatum were inspired by great old musical traditions and produced something new, unique and beautiful, beyond the traditional spectrum. You could call the killer music of O.V. Wright and McKinley Mitchell Blues or Soul, but what does it matter? It’s really fantastic music, and that’s what’s important.

It’s 2019 and let’s not forget that our garbage American pop culture has led us to a reality where Donald Trump, of all people, is president. We’ve got a hell of a lot of work to do. But I ain’t gonna harp on it. I’m gonna carry the torch and I hope you will as well. How do we resist this garbage culture of reality TV, celebrity obsession, empty pop music, social media addiction, and the like? My answer is that we should create and encourage others, especially young people, to create. This cathartic process will help us transcend the sea of modern American cultural B.S.

The seeds will sprout in unlikely places. This might sound delusional, but to be honest, I don’t care. I just want to witness something amazing, magnificent, and beautiful, whatever it is. And if you’re in need of inspiration, we’re here for you down at Folk Arts Rare Records.