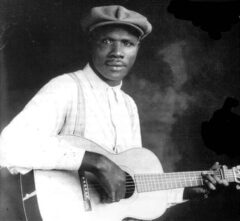 Frank Stokes with a Martin 00-28 guitar
Hooks Brothers photo (glass plate found in the 1990s). A cut out version of that photo has been used for a 1927 Victor catalog.

FRANK STOKES was born on the first day of 1888 in the little railroad siding town of Whitehaven, which is south of Memphis and not far from the Mississippi border. Memphis was to be the focus of much of his life, but he had strong links to Mississippi where he was raised by a man named Fred Carbin in the Delta township of Tutwiler. It was the same place where, one day in 1903, the bandleader and eventual composer W.C. Handy first heard blues music being played at the depot on the Yazoo and Mississippi Valley Line.

As a child, Frank worked on his stepfather’s farm, but as early as his eighth year he was entertaining at the country suppers and fish fries that were so much a part of Black social life during that the period. Only a few years later he was to be seen visiting Memphis and playing music in the streets, parks, and public places.

By the turn of the century Frank Stokes was 12 years old. He was growing up during the ragtime years when the blues, as it came to be known on phonograph records, had hardly taken shape. Although guitars had been made for some time, they became extremely popular at the close of the 19th Century. The young Frank Stokes was most likely attracted to this instrument, rather than the banjo, which was going out of fashion. Nevertheless, he was a child of the ragtime era, and this form of music pervaded his approach. When nearly 30 years later he recorded for Paramount and Victor, the strong, syncopated ragtime flavor was still evident in his recording.

In looking back to those early years and wondering what kind of songs Frank Stokes was singing and playing, we can’t really be sure, but there are a few clues. I remember many years ago asking our own local Texas blues man Tom Shaw about the songs that were current in his own childhood. He said (Tom was 20 years younger than Stokes) “My Daddy and my older brother Willie always sang “Take Me Back.” When I asked blues songster Mance Lipscomb the same question (he was only seven years younger than Stokes), he replied, “About the oldest number that I could recall back in the day when I was learnin’ and heard people play was “Take Me Back.” This is the same song that Frank Stokes recorded in Memphis on Aug 30, 1928, and it is fair to assume that the song, which appears to date from the first years of the century, if not before, was pretty much played the way he learned it. Other songs he recorded from those early years include “Tain’t Nobody’s Business If I Do” and “How Long,” both already blues standards long before he recorded them in 1928.

As a teenager, Frank made his home in Hernando, Mississippi, a remarkable center for blues songsters, including Garfield Akers, Joe Callicot, Robert Wilkins, and Jim Jackson, with Gus Cannon a frequent visitor. Hernando made an important link among the city of Memphis and the more rural regions of Northern Mississippi. Owners of medicine shows came there to recruit talent, and Frank Stokes as a strong and lanky teenager often toured with them. The Doc Watts Show was well known for its blackface entertainers, and Stokes and Akers joined to perform as dancers and musicians. On such shows humorous songs were much in demand, and “I Got Mine” is a typical medicine show song that Stokes recorded in 1928. Medicine show performers like Pink Anderson and Peg Leg Sam were still singing it in the late 1960s.

At the end of the WWI, Frank married Maggie Bannister and settled down to raise a family. A strong man with powerful forearms, he became a blacksmith and worked at this occupation for the next 30 years. He didn’t give up his music, however, and continued to play for parties and other functions in and around Memphis. 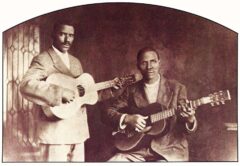 Dan Sane and Frank Stokes, playing a guitar with a tailpiece.

In 1925 violinist Will Batts formed a small band that included Ernest Motley on banjo and no less than three guitarists: Jack Kelly, Dan Sane, and Frank Stokes. Stokes continued to play in various groups led by Batts or Jack Kelly and also worked in duo with guitarist Dan Sane (as the Beale Street Sheiks). Sane was the perfect complement to Stokes, and their duets rank among the very finest country blues guitar duets. It was with Sane and sometimes Batts or one of Jack Kelly’s jugbands that Frank Stokes recorded for the Paramount Record Company in 1927 and again in 1929, and for the Victor label in 1928 and 1929.

During the Depression years, with his recording days behind him, Frank Stokes took to the road again doing what he did best, playing guitar, singing, and dancing in medicine shows, circuses, and country fairs. He toured either solo or with his son Roosevelt or with Willie Borum. Frank, with his long, lanky six-foot frame and premature bald head was a familiar figure in juke joints as far south as Clarksdale. He played this circuit into the late 1940s. In 1952 Maggie, his wife of 34 years died, and Frank gave up playing. He died three years later in 1955.

You can find all of Frank’s recording available on CDs on YAZOO and Document. Any collector or want-to-be collector of country blues will find Frank Stokes a worthy addition or a damn good starting point. The good time ragtime licks in his guitar work and the medicine show entertainment value of his lyrics, along with his rich, distinctive voice, made him one of the most popular musicians in Memphis in the Golden Age of Beale Street.

Just listen and you’ll see why.

Jody Reynolds and the Storms