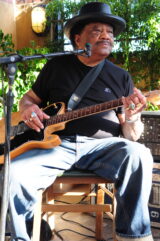 Tom “Tomcat” Courtney hails from Waco, Texas where he was born January 23, 1929. His Dad played ragtime piano and his mother, who died when he was 12, sang in the church. He left home and started roaming after his mother passed. Went on down to Corpus Christi, Texas on a cotton truck. Tom recalled, “I got down there and a guy was puttin’ on this floor show at a honky tonk there. His name was Bee Kelly and he gave me my first job as a tap dancer in the show. Headin’ up things as lead dancer and guitar man was a guy named Oak Cliff T Bone (soon to be known as T Bone Walker). He taught me to dance and to play the guitar. In those days he was better known for his dancing than his blues picking.”Tom stayed with Bee Kelly for some seven or eight months and then went back to Waco. He’d just gotten into Waco when the Dailey Brothers Circus came to town. They were short a dancer, so he left and stayed with them a few years (from 1942 to 1946). “We went all over the South, up into Ohio, out to New Mexico, up into Illinois. I still played the blues but mostly, in those years, I was known for my dancing. I met quite a few entertainers during that time and got a chance to sit in with some of the best, like Memphis Slim and Louis Jordan. In the circus they had this guy named Johnny Williams who had made some records and he’d play guitar and I’d dance. We’d both sing. It was in 1943 that I ran into B.B. King. The circus was playing in Memphis, and I heard someone say that B.B. was going to be playing that day in the park. Well, I thought for sure it was old Bee Kelly that I had worked for. When I got there it was B.B. King. He wasn’t famous or nothing like now. He was playing an old box [acoustic] guitar and he had a drummer and a guy blowing harmonica. It was sort of a picnic, and he was the entertainment. He wasn’t big and heavy set then either. He maybe weighed 160 pounds at the most. I heard he was playing on the radio but I didn’t think that much of his music. There was a lot of what he was doing going around. It wasn’t until a few years later when his songs started to be hits on the radio that I started to pay attention. I went to see him in concert and learned some of his tunes. He’d picked up a little weight by then.”

Through most of the time when Tom wasn’t on the road with the circus, he made his home in Lubbock, Texas. “I worked in the honkies and juke joints around there with T Bone and others. Usually someone would tell jokes, some women would strut their stuff, and I’d dance. I also began to mess with the guitar a little more. I’d mostly sing a few songs, with others like T Bone playing. I’d sing ‘St Louis Blues’ or ‘All by Myself in the Morning’ while dancing. I worked in season with the circus until the end of the war and then they wanted the minstrel part to tour overseas with the USO. I didn’t want to go overseas, so I went back to Lubbock and started playing blues full time. That was in 1946.

“I’d play the honkies around Texas and I’d run into other guys like Lil Son Jackson and Lightnin’ Hopkins doing the same as me. Sometimes a name artist like Muddy Waters would come through. Once, at a dance in the early ’50s, I got up and sang a couple of numbers with Muddy’s band. Man, was I ever big, telling all the women about my friend Muddy Waters.

“I started playing really professional in 1950. The first songs I really wanted to play were ‘You Gonna Miss Me When I’m Gone’ and ‘Goin’ Down Slow.’ Later, I saw Little Walter play and I started using that minstrel beat of his. I played with T Bone Walker’s band all around Texas in 1951. We’d play and then we’d dance. I told him about how I’d steal all his steps when I was little. He’d laugh and say, ‘I knew you was doin’ it… look like you stole a few guitar licks too.’

“I was about 21 or 22 then and we played at a place in Lubbock called the Greasy Spoon and then we played at a place called the Comeman Club. T Bone would play the main show and I’d take over the band after hours. T Bone would let me sing a song or two on the early show and pick a little guitar. I’d always do ‘St. Louis Blues,’ a song I’d learned from a guy I picked with up in Illinois while I was still with the circus. He was a piano player named ‘Dr Clayton’ (who recorded for Bluebird and Victor).

“It was in 1952 that I met Smokey Hogg. I had married his neice in 1951 and had quit playing for her. She didn’t tell me Smokey Hogg was her uncle . We went to visit her daddy and I heard this guy in there playing and singing. I’d heard him before. I’d just bought one of his records. He was my wife’s mother’s brother. I worked with Smokey and with his brother John quite a lot after that. They didn’t get along too well but I got on well with both of them. Smokey was a heavy drinker and always had trouble keeping a band together even in his peak days when his records like ‘Good Morning Little School Girl’ were selling well. I didn’t stay with his niece too long, but remained friends with Smokey and played with him regular when he was in Texas. He died in Greenville, Texas in 1959 right around Christmas time, and he’s buried there. I came over from Lubbock to attend the funeral. He was an easy-going guy but he just drank too much and then he’d get sloppy and not play well. He went on the wagon once in 1957 but then he went out to L.A. and took up his old ways again. They brought him home to Greenville to die.

“John Hogg was always the better musician, you know, but he never got the recognition Smokey did because he didn’t like to sing so much. He’d let the other guys sing for him. He’s a good singer but he’d rather play. He always said that he and Smokey ‘never did play together, only with each other some.’ They used to tell folks they were brothers but actually they were first cousins.

“I first came out to the West Coast in 1961 and played some with John and others. I had moved from Lubbock in 1960 to Denver to play at a club called the American Club with Little Johnny Taylor. He’s the one that had that record ‘Part Time Love.’ I went on the road with him to L.A. and that’s how I got out West. After that I went to Africa and stayed for a year and then came back to L.A., but I went right back to Texas in 1963 to play with a guy named Saxophone Slim who had broke off from Lightnin’ Slim’s band to form his own group. We went down and played around Baton Rouge, Louisiana for about six months. I quit him to come out to L.A. with the Freddie King Band (I played rhythm guitar) for a gig at the California Club. His band broke up after that and I stayed in L.A. playing with Pee Wee Crayton and then with Lowell Fulson awhile. Finally, I went with John Hogg’s band and stayed with them with only a couple of breaks until about 1970.”

Tom met up with Henry Ford Thompson and Louis Major and then moved down to San Diego in 1971. When I met them, Tom had only been in town about two weeks when he and Ford came into a Friday night concert at my shop [Folk Arts Rare Records] and played. It had been a long road for Tom with a new chapter here in San Diego about to begin. All these years later he’s still with us [note: Tomcat died of the Corona virus in 2021] and has become San Diego’s very own blues treasure

Reprinted from the May 2015 issue of the San Diego Troubadour.

How to Produce a Wild Street Fair

The Time I Saw Hank Williams