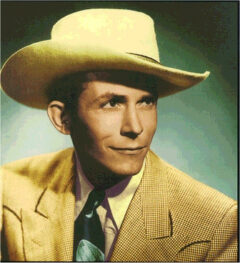 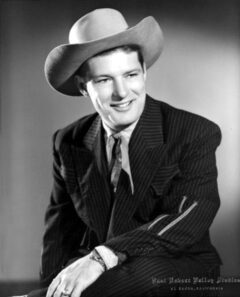 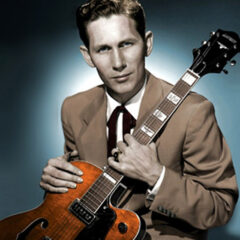 I’d only been in San Diego about a week. It was September and it was hot. My uncle Tony called them Santa Ana winds. They sure were blowin’, but we all climbed into that big old stake truck, held on to the slats, and headed off from Chula Vista out to the country east of El Cajon on a Sunday morning, going to see Hank Williams at the Bostonia Ballroom. My Dad was especially excited. He was still the record collector in the family (that title had yet to be passed down to me), and although he only had a few of Hank’s 78s, we all were told that this man was among the best, and his music would live forever. Dad said it, and because he was the one who knew about music in our family, it had to be so. Anyway, at 12 years old, any chance to ride some 40 miles in the back of a truck and be able to pick on my sisters Leona and Dorothy in the bargain was a certain way to beat the heat on that hot day.
On through the city of El Cajon and a ways out into the country past the old Bostonia General Store, across the street and down about half a block, the old ballroom stood off to the left with a parking lot this side of it. As we pulled up and parked, the place was already getting crowded with lots of folks coming early (many probably direct from church). Smokey Rogers and his band were already on stage doodling around with some instrumental music as the crowd came in.
The big old dance hall, which had been home to the Big Bands playing dance music in the ’30s (it opened in 1929 or so), had made the switch to country music in the 1940s, and most of the big names in country music played there. One end was set up with a solid oak bar, and at the other end was the stage. For the Sunday family shows the hall was divided into drinking and listening sections. However, for this particular show it was more than two to one families. Most people had come to hear Hank sing.

Hank came on with a wave,
kind of leaned over the microphone,
swung his body around a bit,
and dug into Lovesick Blues.

The show was supposed to start at 1 p.m. with an opening set by Chet Atkins, who was traveling with Hank. We found out early on that because of the Santa Ana winds, Hank’s band, The Drifting Cowboys were stuck east of the Laguna Mountains, and that Hank would be going it solo or with back-up by Smokey’s band. On this Sunday however, things were even more laid back. At the end of Chet Atkins set he just stayed up on stage and introduced an old friend, Hank Williams. Hank came on with a wave, kind of leaned over the microphone, swung his body around a bit, and dug into Lovesick Blues. Chet joined in with his own special kind of guitar playing, and for the next 90 minutes or so, the audience was mesmerized by twolegends coming together for some very memorable moments. For this 12 year old, it started my interest in being a musician. The very next year I had my first Sears Silvertone guitar and was buying records on this new size (45 rpm). I never got to see Hank again. He was gone just three months later on New Year’s Day in 1953. But that very hot day in September at the Bostonia Ballroom lives in my memory.
Note: This article first appeared in the September issue, 2001, of the San Diego Troubadour.

Utah Phillips: The Man, not the State