January 2023
Vol. 22, No. 4
Jeff Berkley Version 2: The Next 50 Years by J.T. MoringMarch 2021
Back with a Bang! Java Joe's Reunion at San Diego Folk Heritage by J.T. MoringMarch 2021
Book Review: The Philosophy of Modern Song by Bob Dylan by Ted BurkeMarch 2021
Rick Nash: Bass Man in Demand by Wayne RikerMarch 2021
If Music Be the Food of Love, Play On: Dually Noted Pairs Fine Food and Fine Music by Paul HomiczMarch 2021
Mod Revivalists the Trebels to Reunite for 40th Anniversary Show by Jim TrageserMarch 2021
Harold in the Land of Jazz by Bart MendozaMarch 2021
Sephardic Dance and Music by Yale StromMarch 2021
Loretta Lynn: A Special Tribute to the Queen of Honky Tonk by Terry Paul RolandMarch 2021
Ben Grace Gilmore: It's All About Building Community by Sandé LollisMarch 2021
Advertisements 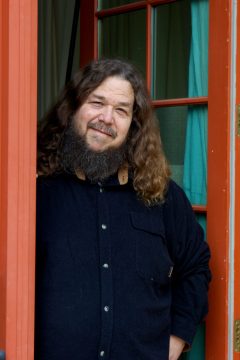 You know Jeff Berkley, right? The preeminent figure in San Diego folk-rock, anchor of our top folk duo, sideman to the stars, and producer of innumerable San Diego Music Award-winning albums over the last 20 years. That guy.

You do know Jeff Berkley, right? Your favorite memory might be an intimate Berkley Hart house concert or listening to him weave a musical net for Lisa Sanders or Joel Rafael or Tim Flannery. Or maybe you’ve been lucky enough to work with him. A standout memory for me was watching John Doe of X, playing an open air Adams Avenue Roots Festival stage as Jeff walked by. John called Jeff up, handed him his guitar and immediately launched into a searing cover of “Money (That’s What I Want).”

Jeff says a standout memory of his own was finding himself on stage next to Pete Seeger, with only Pete’s banjo and Jeff’s djembe between them. Jeff isn’t a big name dropper, but his more recent experiences with Bob Weir, Dead & Company, and Jerry Jeff Walker (all met through his work with Tim Flannery) delighted him so much that he doesn’t mind sharing.

You know Jeff Berkley! Right? But do you know the new improved, Jeff Berkley Version 2? Sit with Jeff awhile and you’ll hear phrases like “light entered my life” and “rejuvenated artistic soul.” We’re not talking about going to church on Sunday. And we’re not talking about some new drug experience. We’re talking about Jeff rounding the corner at age 50 and realizing he’s in a damn fine spot, poised to meet the next segment of his life with a sunny, open, embracing outlook. And it’s not hard to locate examples.

That new outlook is bringing new energy to his production and songwriting. Jeff is exploring better ways to communicate, including a deeper use of video (useful during Covid!) and piano (look out, world!). He relates feeling more positive and healthy, bringing fresh life to his work, and particularly to his collaborations. Jeff has found that “sometimes it takes half a lifetime to discover what works to make up a person.” (“Half a Lifetime” sounds like a Berkley Hart song I would listen to!) 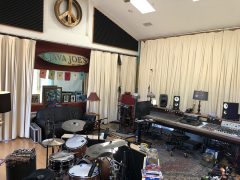 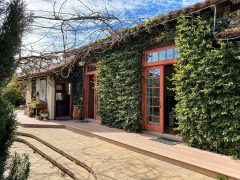 An obvious factor in Jeff’s new perspective is the location of his day job. He’s producing and engineering records out of The Om Grown Studio located on the property of Jason Mraz’s airy North County fruit orchard. The big main room, apparently a barn in a previous life, has multiple double doors that open onto a fireplace sitting area, strung over with passion fruit vines, with avocado trees running off as far as you can see. That room contains not only the drum set and Hammond organ, but also the Neve mixing console where Jeff spends much of his work days. Along with acoustic treatment, the walls are adorned with unique art, including a massive peace sign and Java Joe’s surfboard.

After years of working out of his own studios, which tended to be tucked into dark corners of his home, Jeff moved into this space a few years back, pooling his equipment with Jason Mraz and Robbie Robinson. “At any time, I can put my feet in the grass, pet a cat, or eat an avocado.” During my tour of the place, Jeff not only stroked Krishna the cat but also knew where to find the treat that would incite a purr in the aloof animal. This is a good metaphor for his music production work!

The infectious positivity of Jason Mraz is undoubtedly another influence. Over the years, before Jason won his two Grammys, he and Jeff spun in similar orbits around Java Joe’s, forming a solid basis for their current collaboration. Jeff engineered Jason’s most recent album, Look for the Good, as well as co-wrote the title track, and is lined up to produce the next one as well.

Not least, Jeff credits the “loving patience and support” of his girlfriend and best friend Kibria Sarkisian as a major inspiration for his attitude and outlook. They met “multiple lifetimes” ago, according to Kibria, again at Java Joe’s, where “Jeff likes coffee and I like music.” I observed Kibria gently pulling Jeff out of a fanciful rabbit hole rap when it was time for him to get in front of his weekly live stream audience. “We work well together and I try to help while still not interfering. I am a strong believer that no one does anything alone. It takes a partnership, a team, a village or what have you. Me and Jeff: we ARE all of those things.” I can’t think of a stronger foundation for a relationship—or a life—than that. 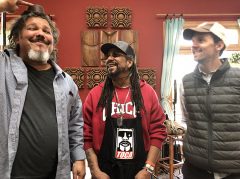 Carlos Olmeda, Toca Rivera, and Jason Mraz in the studio. 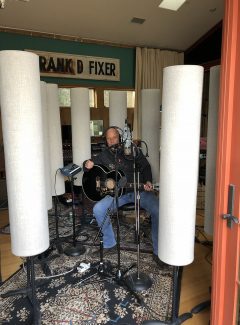 Tim Flannery in the studio.

Approaching the studio takes you through miles of a now-rare Southern California rural agricultural landscape. Winding roads over rolling hills through working farmland gives you time to shed any city tensions before you get to the Mranch. Drive through the gate and get a wave from a skinny White guy in baseball cap and Covid mask raking leaves into a trash can. Could that have been …? I reckon it was.

Get down to the studio and you’re surrounded by greenery, out of sight and hearing of the world of cement and petroleum. You immediately get a feeling that this is where good things happen. The creative combination home/farm/studio/gathering place inspires an open mind where ideas flow free.

The studio main room, described above, allows Jeff to physically be in the midst of the recording process rather than walled off in a “control” booth. That facilitates easy communication and Jeff playing along with the musicians, whether he’s part of the record or just digging deeper into the groove.

Several adjoining spaces can be used for isolating vocals or guitar amps, or for storing the equipment that tends to accumulate in a studio. In addition to a stellar collection of amps and instruments, Jeff is particularly proud of the contents of the microphone cabinet. One room has a collection of keyboards and a smaller recording setup for when the big console would be overkill. Sometimes even all this space isn’t enough, and the musicians spill out into the patio, taking the inside out. Sometimes they just open the big doors and let the outside in. Listen closely to the records and maybe you can hear the avocados in the background.

Longtime collaborator Cathryn Beeks says “I’ve recorded at every one of Jeff’s Studios and each of them has his cool laid back vibe and excellent equipment, but I like his current digs the best. In studio with Berkley is a magical experience. All time stops. It’s my favorite place to be.”

Let’s Back Up a Step
It’s been a while since we featured Jeff in the Troubadour. Here’s a brief look at some of his output since his 2014 cover story.

Between musical numbers, a recurring theme was a knock at the door, with one neighbor after another bringing a poinsettia to add to the growing pile. Jason recalls, “Setting up the closing scene, we realized we needed more plants. Calman had to run around the neighborhood, knocking on doors and begging for poinsettias. The ‘special’ Christmas brownies were really good too.” The things these guys will do for their art! Jason runs a marketing the communication business AVO Creative when he’s not working with Jeff.

And then there’s the engineering/production/session/touring work that could make a story in itself. Check this list of talent! (Sorry for anyone I missed or mis-spelled!)

What Does It All Mean?

Given all this, how is JBv2 spending his time in these bright, though Covid-constrained, days? Besides Kibria, cats and avocados, here are some of the things he’s engaged in.

What an astounding vortex of creative energy! Yet no matter how great his own output is Jeff’s greatest joy is in the collaborative process, where his objective is to “joyfully create the vision that’s in someone’s head, and in their heart. It’s so wonderful to watch someone metamorphosize into who they are supposed to be.” A tall order, but Jeff Berkley is up to it. Cathryn Beeks will testify. “He’s really come into his own. Found his passion and his place and he is using his skills to help others make their art the best it can be.”

I can’t see how Jeff has time in his schedule, but he claims he’s open to taking on new clients, so if you’re thinking about getting that quarantine album out of your system, you know who to call.

Oops, We’re Out of Time
Jeff wants everyone knows that if you were on his JBv1 FRIENDS list, you are definitely still there in v2. If you were on his OTHER list, it’s probably worth a shot a switching over to the FRIENDS one during this transition period. And if you never got on ANY of Jeff’s lists before, I suggest acting now. You’ve only got another 50 years or so, and you won’t want to miss any of it.

As I went walking I saw a sign there,
And on the sign it said “No Trespassing.”
But on the other side it didn’t say nothing.
That side was made for you and me.

Michael Bloomfield: The Rise and Fall of an American Guitar Hero