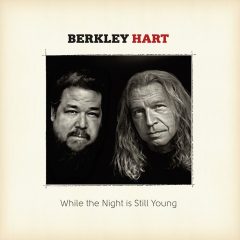 Berkley Hart are celebrating 20 years together, and by now many if not most good roots lovers in town can instantly recognize the sublime organic blend of their harmonies, the lyrical insights of Calman Hart in his many musical character studies, and the humor and soul in Jeff Berkley’s liberating country rock. Their new album, While the Night Is Still Young, is their eleventh together.

This time, they split the songwriting per usual on 10 originals and one cover, and each bring in other noteworthy songwriters to cowrite a number of the tunes; these include Eve Selis, Dave Howard, Stephen Clark, and Frank Lee Drennen. Berkley recorded and produced, with studio cats including top players like John Foltz on piano, Bob Sale on drums, Doug Pettibone on guitars, and others. In other words, it is excellently played and produced, like their other albums–as their fans are now used to.

“Dear John John Deere” shakes out any cobwebs at the gate, a powerhouse country rocker that belongs on somebody’s heavy radio rotation in any just world. He blew it again, another “whiskey coma on the kitchen floor,” and she has had it, and jumps on the tractor to write a two-letter farewell on the corn field–first letter is “F.” Adding to the fun is a nasty guitar break by Joey Harris (Mentals, Beat Farmers). Hart is known to address our messed-up world with some creative metaphors, and seldom does better than on the highlight “Buckle Up.” In an almost somber, sparse shuffle he touches most of the bases; there is the angry little man with the itchy middle finger calling the shots and foxes in the henhouse, but Hart seems to have even less use for the bandits at the courthouse, “They put a poster of Jesus on the door/ They wipe their greasy fingers on the Bible/ As they bless the rich and crucify the poor.” Well put, sir.

Hart scores again with a ballad that is given a special vibe by Foltz’s keys, “Bring Back the Rain.” It’s a change of style for a BH tune, but the beautiful harmonies that anchor it make it all theirs. It’s Berkley’s turn to rock on “Georgia Pine,” a road tune that grinds nicely as it tells about living on the freeways, and on “I Chose This Shell” he is again at the microphone, on a tale of him finding both love and redemption in a special woman-helped by a haunting, Gospel-inspired vibe.
The title tune, a personal country ballad by Hart, calls on patron saints Willie and Hank as a honky-tonk man takes measure–he still has some livin’ to do, and “wants to pull into heaven with an empty tank.” “Copperline” is the cover, and the James Taylor song is a masterpiece that includes Foltz’s soft key touches and Berkley’s perfect, back home vocal. It has that Berkley Hart sound that can’t be found anywhere else.

While the Night Is Still Young is good enough to be worthy of Berkley Hart’s 20th anniversary, a must for roots fans.

Berkley Hart will be celebrating their 20th anniversary with a special show at Poway OnStage on Saturday, April 14. Check the calendar for details.