February 2023
Vol. 22, No. 5
Berkley Hart Selis Twang Celebrate New Album at Poway Center for the Arts October 2014
Lady Brain Presents “Home is Where the Art is” Holiday Party and Clothing Drive by Lindsay WhiteOctober 2014
How Did You Get Here? by Chuck LapinskyOctober 2014
Aging Rockers and Fixed Incomes by Paul RosengardOctober 2014
Doors of Change: An Environment of Trust October 2014
Notes from Desert Trip by Matthew BurkeOctober 2014
Hail the Conquering Groovies! by Steve ThornOctober 2014
The Spring Harp Festival Blows into La Mesa on Saturday, March 26 by T.E. MattoxOctober 2014
MARTIN GRUSIN: A Loving Tribute from his Daughter by Aryn GrusinOctober 2014
Ballads and Blues with Jeffrey Joe and Eric Freeman October 2014
Advertisements

“BHST hark back to the halcyon days of Laurel Canyon and the West Coast sound, but they do it with a new-found edge and it sounds as fresh as a daisy.” – No Depression

Fresh from their European tour and two consecutive sold out shows at the PCPA (O Berkley, Where Hart Thou? and The Last Waltz), San Diego Music Award-winning duo Berkley Hart return to Poway with fellow SDMA recipients Eve Selis and Marc “Twang” Intravaia for a concert celebrating the release of their new CD, along with special guest Jack Tempchin (writer of “Peaceful Easy Feeling” and “Already Gone”). 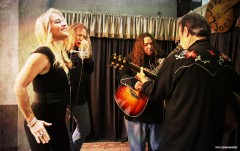 Come join the fun as Berkley Hart Selis Twang bring to the stage their fresh contemporary take on the California country sound of the 1970s, with tight vocal harmonies and well-crafted songs, a la the Eagles, CSNY and Linda Ronstadt.

From the heart-warming opening track “This Is Home”, to the heart-wrenching ballad “If I Lost You”, to the heart-stopping rocker “Delilah” (“no, no, Delilah, you ain’t gonna cut my hair!”), these tracks are guaranteed to touch and inspire.

Don’t miss the San Diego debut of Berkley Hart Selis Twang and the release of their new album at the beautiful Poway Center for the Performing Arts. Â You won’t be disappointed!