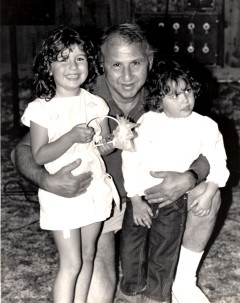 Martin Grusin with his two daughters. 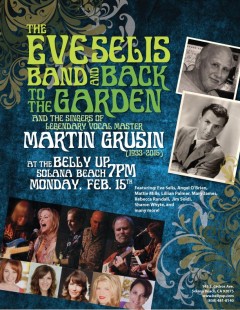 I can’t tell you verbatim about the life and times of my father circa pre-Aryn, but, I can tell you what I’ve heard, and goes something like this…

My father, Martin Grusin, was a jazz musician, he was a writer, an academic, a performer of the arts and amongst many other things a brilliant story teller. Because of this my, knowledge of his past is forever illuminated within my mind. To me, my dad’s story is like a street with many houses, some are glorious and others are weary but all these houses are a resting place for soul.

My dad’s street has five houses, each house within it, carries its unique significant importance in his life. The first house exists in Chicago, Illinois where my father was born September 15, 1933. This is his childhood, his playhouse, this is where his father an Eastern European immigrant and his mother are building a home, this is where he learns harsh realities young going to work in a factory at the age of 10. This is where he sang in the synagogue for the first time when he was 13 years old and realized that he was in love with the art of singing and that this is what he wanted to do for the rest of his life.

The second house is when he was in the army, drafted into the Korean War and by God’s saving grace he was overheard singing by one of the sergeants who happened to direct the USO American tour. Shortly thereafter in no less than the measure of a night his life had been changed from being sent to an uncertain death in the Korean jungle to being a major performer singing in the Army’s entertainment tour, giving him just a taste of what was to come. It was during this tour that his love for singing grew even more and he no longer just loved to sing but was a full fledged addict of its emotional embrace.

As we approach the third house, we enter the foggy streets of New York City. The streets look as though they are rising as the lamplight creates an ethereal glare. Off the beaten path is Birdland, and inside this world famous night club is my father, singing. It’s here he sings his heart out, it’s here he presses his face up to the mirror of the world like a little boy mesmerized by the action of the world beyond his reach. From here he works for RCA Victor, landing a twelve year run writing musical arrangements, indulging in his particular heaven.

The fourth house, is on the streets of San Francisco where he studied at the conservatory and worked with electronic musician great, Terry Riley. As his love for music exceeds its prior limitations and he is introduced to the wonderment of musical expansion, Martin Grusin participates in the beginnings of the San Francisco modern electronic music scene, adding to his already impressive resume.

Now we leave San Francisco and head down to our current city San Diego California. This house… well this house is my house too, is the house where he entered his master’s program at UCSD, where he met my mother, and fell in love instantly. This is the house where he started his career as a voice teacher, where the Martin Grusin Studio was born, “Where the Professionals Train” became our in house motto.

This is the house in which he developed twelve vocal manipulations unmatched or reproduced by any other in his field, a vocal technique that developed a singer’s voice pitch by pitch and one breath at a time, and a complete university caliber course SightReading for Singers. This is the house where he built countless voices, made numerous life long friendships and established himself as a noteworthy contributor to the music world.

Ballads and Blues with Jeffrey Joe and Eric Freeman