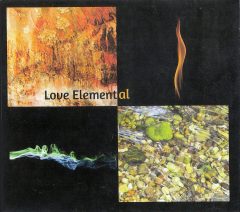 Back to the Garden are likely familiar to many roots fans. Guitarists Jim Soldi and Marc Twang Intravaia, keyboardist Sharon Whyte, bassist Rick Nash, and Larry Grano on drums have all played in the Eve Selis band for years; here, John Rekevics adds horns. Whyte, Soldi, Intravaia, and Grano all perform lead vocals on the 14 tracks of their new album, Love Elemental.

These musicians have performed shows showcasing such classic material as the California country-rock of the Laurel Canyon bands in late ’60s LA, and the material here is an inspired mix of beautifully executed covers, with a couple of worthy originals for good measure, which recall just how great some of the album-oriented country rock music of 45 years ago was–and remains. Flawless production throughout by Soldi comes through on every track.

Most of this music originated, to begin with “Mr Tamborine Man,” and one almost forgets just how revolutionary this song was in 1965–both Dylan’s lyrics and the Byrds’ tight harmonies appearing on the AM radio with the corny pop and budding Motown music of the time. This rendering is simple and almost reverent. The Band’s “It Makes No Difference” follows, with Grano making an impression on the vocals as horns help flesh out an arrangement that sounds at least as good as the original. It’s Whyte’s turn on “Can’t Find My Way Home,” over the top of finger-picked guitars and organ chords; echoes of lead guitar fill in the background of a superb acoustic guitar break–this entire album is a great sampler for guitar lovers, Soldi and Intravaia are both outstanding.

The Band gets another visit, as all four vocalists take a turn on the lead mic for “The Weight.” On Emily Harris’ “Luxury Liner” they speed things up with Soldi getting the spotlight, backing up Whyte’s sassy vocal with line after line of seriously fast chicken-picking, following the bassline up and down with flotillas of sharply played notes. Though “Layla” may be overexposed, it gets a dose of extra vigor with Grano again tearing into a great vocal, as both guitarists lay down a Clapton clinic during a tradeoff solo, and again with two slide guitars during the big piano coda.

Intravaia sings “Friend of the Devil,” another great old tune that crystalizes with the beautiful harmonies here, and “Helplessly Hoping” has flawless three-part harmonies as well and adds electric instruments and Intravaia’s tasteful solo. A disc highlight is another Crosby, Stills, and Nash track, “Southern Cross,” as the perfect three-part supports a lead vocal by Soldi that sounds like Stills was sitting in.

There are two originals by Intravaia and his wife, Paula; “Camouflage” is bluesy and sinister sounding, with lyrics about tunnels and passports: “inside my mind, you’ll find who I am.” It is driven by snarling electric slide riffs. The title tune wraps the disc, a softer harmony-driven disc about the Earth, again sung by all four lead vocalists. The soaring choruses of “We Are the Earth” are a great way to close an album of such peaceful and melodious music.