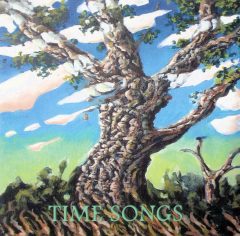 From the county’s back country near Julian, the band Haywire has a new CD, Time Songs. Billing itself as an “eclectic folk band,” with sources as varied as Tom Waits, Joni Mitchell, and Neil Young, they come across on many of the tracks as a musical and lyrical throwback to the golden age of hippie folk rock–the cultural explosion that brought us Jefferson Airplane, It’s Beautiful Day, the Grateful Dead, and the Youngbloods. They have just enough of a ragged edge to match the groove of the late ’60s, and a few of the titles are: “Groovy Sunshine,” “Sunlight,” “Time Flows,” and “Embrace Devastation.”

Leading the band are Kathleen Beck and James Lydick, who wrote the 13 originals; sing the leads; and play guitars, accordion, and other instruments. Fiddle/bass/backup singer Maril Parker, drummer Paul Gordon, and flautist simply Liz round out the group, with the arrangements of several songs using fiddle, flute, and accordion to add interesting counterpoints to guitar themes. Throughout, rich vocal harmonies fill out the songs. “Rock of Ages” opens, surging with a strong female vocal taking turns with chicken-picked guitar, and making for a good start. A disc highlight, “Groovy Sunshine,” features haunting interplay between flute and low fiddle tones, beneath a floating melody about “Where are we going? Nobody knows, perhaps it is the time, just let things grow.” “The Clock” uses more of a traditional folk template and, again, a great arrangement with fiddle, flute, and accordion; the lyrics to this one are an anti-establishment testimony, as Lydick lays it down: “the hands of the clock are sharper than death.”

Beautiful, wall-to-wall female harmonies mark “Dancing,” lifting the tune a notch, and “The Light” has a jazzy feel that gives the flute another opportunity; the quirkiness here recalls the Airplane’s “My Best Friend.” A bit of soap-boxing is to be expected in folk rock–and especially an album that recalls the hippie revolution, here it is in “The Agenda,” about those in power having no use for anyone with feeling or empathy.

The last five tracks are like a musical psychedelic time warp to Hashbury. “Time Flows” clicks with a vocal about belonging to the universe, with guitars that could be lifted from a Country Joe and the Fish track–again filled out and lifted by Liz’s flute. “Sally” is another disc highlight, a nod to the Grateful Dead that rocks with a solid boogie feel, nice harmony touches, and sharp lead guitar breaks. The acid-rock “Sherry” has a wonderfully spacey arrangement, enhanced by a psych-out slide guitar/fiddle duel like something from the old Avalon Ballroom. Fatalistic lyrics about clinging to illusion mark “Embrace Devastation,” driven home by full-throttle, old-fashioned fuzz-tone guitar. The disc wraps with the softer “Willing,” which brings back the flute, and concerns itself with the planet and the damage we have done to it. It is a nice moment of quiet reflection, after an entertaining musical journey by the Haywire band, playing interesting new Time Songs built upon experiences familiar to most listeners.

BACK TO THE GARDEN: Love Elemental