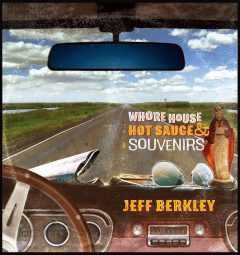 During his high-profile career with musical partner Calman Hart, Jeff Berkley has released ten albums since the Berkley Hart debut in 2000. With Hart and on his own, he has developed a growing strength as a songwriter and storyteller–of poignant personal still lives, growling country rockers, and slices of gospel. On the music side, Berkley has also become one of the go-to producers and sidemen in the local and even national roots scene, playing for and producing top local musicians (too many to list here) while creating a trademark spacious yet intimate sound.

His first solo album is here, and for fans of his live shows, the humorous title (from a desert road sign) is no big surprise: Whorehouse, Hot Sauce & Souvenirs. The 13 tracks are all Berkley originals but one, and the cadre of session musicians on hand is a who’s who of San Diego Americana: Doug Pettibone, Veronica May, Ben Moore, Sharon Whyte, Duncan Moore, Jim Soldi, Cathryn Beeks, Jason Mraz, Marcia Claire, and others. The music is a potpourri of styles with Berkley’s wit, friendly vocals, and musical and lyrical edge a constant. A “live in the studio” affair, with a few overdubs for horns and a backing choir, it has a crisp, spontaneous sound.

“Misery” grabs the listener from the gate, with plenty of electric guitar muscle, slung low with slide, pounding home a blues message about leaving a bad woman. A version appeared on the Las Vegas disc, and this one may even have more attitude and grit. “Conversations With the Moon” opened that 2009 album, and Berkley’s new recording is soft and ethereal, with a backing choir soaring in the upper reaches while he sings, “Just hold the phone up to your soul.”

A cranked-up guitar is prominent in “Tremolo,” along with crackling speakers, echo, and lots of noise as metaphors for a messy love relationship. Quieter, and maybe more effective, is “Something ’Bout this Mountain.” With just Berkley, a female backup, and acoustic guitars, this lovely folk song about keeping things simple is a touching highlight. Berkley fronts horns and chorus for “I’m Comin’ Home,” which both musically and lyrically recalls the Crescent City; a banjo lick trades off with guitar, then sweet horns and Hammond organ, as he tells about momma shaving catfish while he tunes up his fiddle. The rock boots come out again for “Envy Things,” as Berkley packs emotion into his delivery about waking up and finding himself rotting with jealousy–a message again brought home by hot guitars and Hammond riffs.

Late in the set, Jack Tempchin’s “Peaceful Easy Feeling,” is given a nice mid-tempo treatment that leaves room for some expressive electric guitar soloing. “Salvation Mountain” closes, a nod to Gospel that sounds like a blast to record: the choir is back, and more keyboards join the horde in the ass-kicking arrangement; then it throttles back as the guitars and keys slowly back off with some bluesy conversations echoing Berkley’s celebration of redemption.