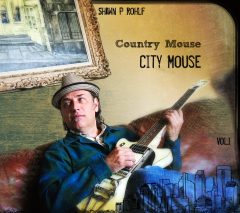 Country Mouse, City Mouse is the new CD from Shawn P Rohlf. The veteran of the local Americana scene for two decades has been fronting his Seventh Day Buskers at the Hillcrest Farmers’ Market and elsewhere, playing as a solo and with other aggregations, including recently with Jeff Berkley and Tim Flannery. Rohlf’s music is typically catchy, quirky, and lighthearted with clever and funny lyrics; on the new album he takes the title to heart, equally comfortable singing power chord-driven rockers, country flavored folk rock, and personal folk fare.

Rohlf wrote all of the dozen songs and enlists capable studio hands in the project. On hand are Buskers John-Michael Brooks on violin and “T Bone” Larson on drums; other prominent players are Steve Peavey on stringed instruments, Christopher Hoffee on keys, but there are contributions from many others–and Rohlf sings and plays nine stringed and key instruments himself.

“Barbed Wire and Broken Glass” opens, as Rohlf sings of missing a love interest after a rocky relationship. “With every crazy episode, I miss you even more,” the snappy lyrics are a sign of things to come–with Rohlf, pay attention to the words. Jumping genres, “Little Willie” is built on a framework of bluegrass banjo and fiddle music, featuring both, and halfway through–like any respectable reel–the beat speeds up to double time for some jig-paced dueling.

Rohlf’s eclectic side comes through on “Yakutat,” an interesting folk tale about an Alaskan fishing village that paints portraits of characters. It is a highlight, rendered even better by the fiddle and harmonies and in the arrangement. Out come the boogie boots for “Fe Fi Fo Fum,” weaving a couple of blues rock ideas around each other, throwing in some really tasty lap slide guitar and a great mandolin solo, and leaving a smile on the listener’s face. Things are still plugged in for “The Blossom and the Weed,” as Rohlf reads the riot act to an errant lover; “So take a good long look ‘cause I wrote this book/ That you’re struggling to read.” Overdriven guitars lead the way, and it shows another side to the folk rocker. The quiet and reflective Rohlf is best heard on “San Francisco Love Affair,” miles away from his rock numbers and another highlight, taken up a notch when cello joins nicely fingerpicked guitars and warm vocal harmonies, as he takes the listener for a travelogue of romantic locations in the city by the bay.

he disc wraps with two songs about cities on opposite coasts. “Neon Trapeze” captures the LA mystique, if there is one, as the plastic fantastic traffic grid is rendered with a hurried bashing of fuzz guitars and Rohlf ranting about “Kimdashian clothes” and “Just another champagne cocaine bubble bath.” On “Broken Pocket Watch,” lovely harmonies over a banjo and guitar lattice send the message about how unique New York is, and about coming to the club dressed in the right color of leather-and rejection. The variety of the songs on this disc should win Shawn P Rohlf many new fans. He’ll be releasing his CD, along with those of Veronica May and Jeff Berkley on May 27 at the Casbah.