February 2023
Vol. 22, No. 5
The Crooked Jades: Old Time Music for a Modern Age September 2015
Lady Brain Presents “Home is Where the Art is” Holiday Party and Clothing Drive by Lindsay WhiteSeptember 2015
How Did You Get Here? by Chuck LapinskySeptember 2015
Aging Rockers and Fixed Incomes by Paul RosengardSeptember 2015
Doors of Change: An Environment of Trust September 2015
Notes from Desert Trip by Matthew BurkeSeptember 2015
Hail the Conquering Groovies! by Steve ThornSeptember 2015
The Spring Harp Festival Blows into La Mesa on Saturday, March 26 by T.E. MattoxSeptember 2015
MARTIN GRUSIN: A Loving Tribute from his Daughter by Aryn GrusinSeptember 2015
Ballads and Blues with Jeffrey Joe and Eric Freeman September 2015
Advertisements

On Friday, September 18, 2015 at 7:30pm, San Diego Folk Heritage will welcome string band The CrookedÂ Jades to its stage. The all ages event will take place at Templar’s Hall in Old Poway Park (14134 MidlandÂ Rd, Poway, CA 92064). Admission is $15 for members and $18 standard. Students with school I.D. receive theÂ member price, and youth ages 12 and under are free. Tickets are available at the door or online. 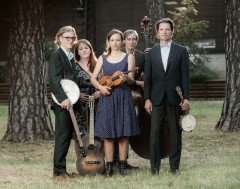 The Crooked Jades, called “the finest band toÂ come out of the stringÂ­band resurgence” by TheÂ Boston Herald, are celebrating their 20thÂ anniversary with a North and West Coast tour.Â Their updated lineup will feature newest memberÂ Emily Mann on fiddle as well as highly sought-after guest bass player Walter Spencer. SaysÂ band leader/founder Jeff Kazor:Â “The band will be fearlessly attempting a 20Â­-yearÂ retrospective, unearthing The Crooked JadesÂ back catalogue from their protoÂ­-grass beginnings-all the way back to the year 1995!”

About the Band:Â For the last 20 years The Crooked Jades have traveled countless miles across 4 continents, 10 countries, andÂ as many festivals to bring you 8 critically acclaimed albums including Worlds On Fire (chosen by Sean PennÂ for the soundtrack of OscarÂ­-nominated film Into The Wild) and Seven Sisters: A Kentucky PortraitÂ – theÂ soundtrack to the awardÂ­-winning PBS documentary of the same name.Â Known for their rare and obscure repertoire, inspired arrangements and eclectic, often vintage instrumentation,Â The Crooked Jades began with Kazor’s vision to revive the dark and hypnotic soundsÂ of pre-Â­radio music. With this old Â­time foundation, the band has created a unique sound by exploring the rootsÂ of Americana and interweaving the diverse musical influences of Europe and Africa. Filtering these oldÂ­ worldÂ sounds with universal and ancient themes through a postÂ­9/11 lens, they seek to make sense of the future. AÂ collective of West and East Coast pickers with equal parts attitude and respect, always led by Kazor, the bandÂ performs with a thrilling energy that has audiences on their feet dancing and critics comparing them toÂ everyone from The New Lost City Ramblers and The Pogues to Gillian Welch, Nick Cave and Tom Waits.

Astra Kelly Goes “Back to Ten”