February 2023
Vol. 22, No. 5
Happy Traum and Chris Clarke to Perform in Poway January 2015
Lady Brain Presents “Home is Where the Art is” Holiday Party and Clothing Drive by Lindsay WhiteJanuary 2015
How Did You Get Here? by Chuck LapinskyJanuary 2015
Aging Rockers and Fixed Incomes by Paul RosengardJanuary 2015
Doors of Change: An Environment of Trust January 2015
Notes from Desert Trip by Matthew BurkeJanuary 2015
Hail the Conquering Groovies! by Steve ThornJanuary 2015
The Spring Harp Festival Blows into La Mesa on Saturday, March 26 by T.E. MattoxJanuary 2015
MARTIN GRUSIN: A Loving Tribute from his Daughter by Aryn GrusinJanuary 2015
Ballads and Blues with Jeffrey Joe and Eric Freeman January 2015
Advertisements 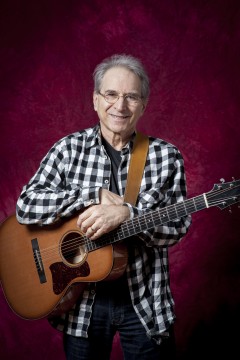 Happy Traum was smitten by American folk music as a teenager and began playing guitar and 5Â­ string banjo. He was an active participant of the legendary Washington Square/Greenwich Village folk scene of the 1950s and ‘60s, and studied guitar with the famed blues master, Brownie McGhee. Over the past five decades he has performed worldwide, earning recognition as a performer, writer, editor, session musician, folklorist, teacher and recording artist. Several notable accomplishments include:

*Happy’s first appearance in a recording studio was at a historic session in 1963 when a group of young folk musicians, including Bob Dylan, Phil Ochs, Pete Seeger, Peter LaFarge and The Freedom Singers gathered in Folkways Records’ studio for an album called Broadsides.

*The New World Singers (Happy, Bob Cohen and Gil Turner) soon recorded an album for Atlantic Records, with liner notes by Bob Dylan, and released a single of the first recorded version of “Don’t Think Twice, It’s All Right.”

*In 1965, Happy wrote his bestÂ­selling Fingerpicking Styles for Guitar, the first of more than a dozen important instruction books which documented the playing of the great traditional guitarists. Homespun Tapes, which he and his wife, Jane, coÂ­founded in 1967 is a dynamic and growing company with a catalog of more than 500 music lessons on DVDs, CDs, books and downloads.

*In 1967, Happy and his brother Artie Traum formed a duet that, according to Rolling Stone, “defined the Northeast folk music style.” Their performances at the 1968 and 1969 Newport Folk Festivals helped to gain them an avid following and a contract with famed manager Albert Grossman. This strong musical partnership lasted until Artie’s untimely death in July, 2008.

*In 1971 Happy once again joined Bob Dylan in the studio, playing guitar, banjo, bass, and singing harmony on three songs (“You Ain’t Goin’ Nowhere,” “Down In the Flood,” and “I Shall Be Released,”) which appeared on Bob Dylan’s Greatest Hits, Vol. 2.

*Happy has been editor of Sing Out! magazine, host of an NPR radio show, and contributor to Rolling Stone, Acoustic Guitar, and Guitar Player.

Opening the show will be Chris Clarke, a local favorite and lifelong student, performer and teacher of traditional, southern Appalachian heritage music. Born and raised in Virginia, Chris has been playing oldÂ­time, country blues, bluegrass and folk music since the late 1980s. His style is rooted firmly in tradition, his interpretation is authentic and he has the ability to connect with the audience with colorful stories (some even true). He has shared the stage with Dr. Ralph Stanley, sang with Mike Seeger and performs regularly at festivals and venues around his home in Southern California — solo and with his band, Plow.

San Diego Folk Heritage is an allÂ­volunteer 501(c)(3) nonÂ­profit organization dedicated to preserving and promoting the folk arts in Southern California. For more information about this concert, please visit http://sdfolkheritage.org/events/happyÂ­traumÂ­wÂ­chrisÂ­clarke/Â