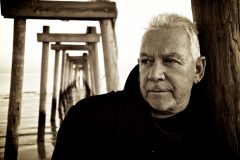 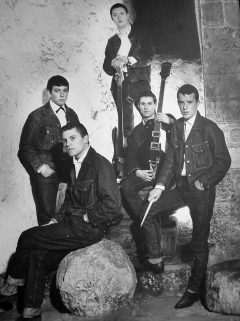 The music never ends. When it began, we can’t say. But, listen to the voice of the age and you’ll hear Eric Burdon. Listen.

The bass hums and brings on an intense beat that moves in sync with cymbals, a loud surf guitar drones, thunders, and crashes into wall of distortion as cello and violin strings take up the rhythm of the bass. Then a familiar, distinctively soulful, timeless baritone blues vocal comes in and sings

In 1968, Eric Burdon, blues-rock pioneer and lead singer for the ground-breaking British Invasion band, the Animals, sparked attention with this song “When I Was Young,” and the anti-war anthem “Sky Pilot” against the backdrop of the peak of America’s involvement in the undeclared and tragic Vietnam War.

It wasn’t the first time Burdon’s songs crossed paths with history. It wouldn’t be the last.

And, once he was young.

Born in 1941 in Newcastle, north of London, his father was a working-class electrician, his mother was Irish. In the region where economic and cultural strife was abundant during the post-war years, young Burdon grew up rough, coming of age in the streets among the bars in the area where Newcastle beer bars lined the alleys and American jazz had found a home. As the song “When I Was Young” says, he learned to smoke, drink brown ale, and find love during his childhood. In his memoir he described his childhood school years as a dark, Dickens-like nightmare complete with sexual molestation and school-approved corporal punishment, a leather strap the order of the day. It was a ‘dirty old part of the city where the sun refused to shine.’

This was the world young Burdon absorbed. It influenced him the rest of his life.

When his father brought a television home, he remembers first seeing Louis Armstrong which sparked his love for blues. After he failed in his attempt to learn the trombone, Burden turned to his own voice as his primary instrument, a natural baritone, he held the kind of character and presence most singers yearned for in the early days of rock ‘n’ roll. It was his gift. It still is today.

In 1962, 21-year-old Burdon met drummer John Steel, who brought him into the Alan Price Rhythm & Blues Combo with the original Animals, Price (keyboards), Hilton Valentine (guitar), Chas Chandler (bass), and Steel on drums. Although conventional history has the name origin coming from a description of their stage antics, saying they “acted like animals,” Burdon, in a 2013 interview, said the name came from a gang of friends that included someone named “Animal” Hogg. According to Burdon, they named the band as a tribute to him.

The Animals, like many musicians and fans in North London, favored the hard-edged rhythm and blues sound drawn from the American South. While all the members were skilled and talented, it was the distinction of Eric Burdon’s voice that gave the band its original dymanic sound. At the behest of Yardbirds’ manager, Giorgio Gomelsky, the Animals moved to London in 1964, landing them in the stream of the tidal wave known in America as the British Invasion. Within a matter of weeks, they were in the studio and on the charts with their first hit song, the classic “House of the Rising Sun.” In the fall of 1964, while the Beatles dominated the charts, “Sun” went to number one internationally. The next two years saw such Animals classics as “Boom, Boom,” “Don’t Let Me Be Misunderstood,” “Don’t Bring Me Down,” and “It’s My Life.”

It was 1965’s Mann/Weil song, “We Gotta Get Out of This Place” that allowed Eric Burdon and the band to make significant historical impact. The song, originally written about the desperate need to leave a destructive home, later became an anthem for America’s troops in Vietnam and their ambivalent feelings about the war they drafted into.

After 1966, the original line-up of the Animals was gone, but Burdon kept the name and allowed the spirit of the band to evolve into a California-based psychedelic San Francisco and L.A.-based sound, scoring hits like “Warm San Francisco Nights,” “Monterey,” “When I Was Young,” and “Sky Pilot.” The band was then billed as Eric Burdon and the Animals. Burdon led them deep into the culture of American music of the late 1960s with experimental concept albums.

It was during this period, from 1966 to 1969, that Burdon would find himself an early elder statesman of rock music holding up a standard for American blues-based rock music. He was diverse in his interests in music, songwriting, writing, and acting. He turned down several roles in classic New Wave films of the ’60s and ’70s, including Nicholas Roeg’s Performance–a role that went to Mick Jagger–and Michelangelo Antonioni’s Zabriskie Point.

There were other moments of historical crossings with Burdon playing an important role. In his memoir he relays his influence on John Lennon and “I am the Walrus” and the title of “the eggman.”

“The nickname stuck after a wild experience I’d had at the time with a Jamaican girlfriend named Sylvia. I was up early one morning cooking breakfast, naked except for my socks, and she slid up beside me and slipped an amyl nitrite capsule under my nose. As the fumes set my brain alight and I slid to the kitchen floor, she reached to the counter and grabbed an egg, which she cracked into the pit of my belly. The white and yellow of the egg ran down my naked front and Sylvia began to show me one Jamaican trick after another. I shared the story with John at a party at a Mayfair flat one night with a handful of others. Lennon, finding the story amusing and hilarious, replied, “Go on, go get it, Eggman.”

Eric Burdon and Jimi Hendrix were also close friends. Hendrix was managed by Animals bassist, Chas Chandler, which allowed the singer the opportunity to develop a relationship with the legendary guitarist. From 1966 until 1970, Burdon and Hendrix became good friends, with Hendrix appearing in concert with Eric Burdon and the Animals on several occasions. In 1970, when Hendrix was found dead of an overdose by his girlfriend, it was Burdon whom she called first.

In 1970, Burdon recorded with an African-American band, War, which yielded two albums and a Top 40 hit, “Spill the Wine.” This was one of many collaborations that would take the singer deeper into blues with artists like Brian Auger, Jimmy Witherspoon, Alexis Korner, and Robbie Krieger of the Doors.

There have been two reunions with the original Animals. In the ’90s, his revision of Eric Burdon and the Animals included original drummer John Steel and guitarist Hilton Valentine. In 1994, the Animals were inducted into the Rock ‘n’ Roll Hall of Fame. He has been voted among the best 100 rock vocalists of all time by Rolling Stone magazine. In 2013 he released an album of new material, ‘Til the River Runs Dry, an album that is just as blues-soaked, vital, and relevant as anything produced by artists more than half his age. In 2017, for his 76th birthday, he recorded a Buffalo Springfield classic.

There is a beautiful wisdom-laced urgency to his R&B gospel-charred interpretation of the Stephen Stills classic protest song “For What It’s Worth,” which reveals that this British rocker still has his hand on the pulse of the times. Like “We’ve Gotta Get Out of This Place,” and “Sky Pilot” it sings of the times. As Burdon himself said in a recent interview:

“The whole idea of recording this song came as a result of a conversation I had with a young fan backstage, when she asked me, ‘Where are the protest songs today? Right then and there, I wanted to write and say something about the brutality that’s going on in the world today–but I couldn’t find any better way to say it than Buffalo Springfield did in ‘For What It’s Worth.’ I thought of reintroducing this classic, which is as relevant today as it was during the Vietnam war and speaks to this generation just as it spoke to mine.”

The comment that followed during this interview once again finds the veteran rocker staring directly into the eyes of history and speaking out in the age of Trump.

“The message is clear. Racism is back, stronger than it ever has been. The struggle between the sexes is at a boiling point. Violence is out of control. Our very home planet is under threat. It’s time to grow up and take responsibility. We must wake up before it’s too late. Everything we believed in, everything people fought and died for in the ’60s, is under attack today. So join me, sing with me, speak out against the madness. We are not afraid.”

Through a history laced with legendary movies and some of the best music in rock, Eric Burdon has largely gone unnoticed by much of the rock establishment. The elusive nature of commercial success that a few of his peers have enjoyed have not always visited him. But, the hunger to make great music based on American blues has always been there. To appreciate fully the scope of his talent and vision, the listener needs to go beyond the Animals to his current recording.

And he is an artist who really must be seen in a live setting.

Here is a personal memory. In 1999, he played festival on the Queen Mary in Long Beach with the New Animals, which included Aynsley Dunbar on drums. It was a stunning show. I remember feeling that there was no qualitative difference between his blistering blues set and the Rolling Stones’ stadium shows on their best nights. That night Burdon was the same street-wise young rocker who stumbled out of the bars in his Newcastle hometown. He pranced the stage and commanded the band as they ran through the best of the Animals and his own take on American blues standards in a way that was uniquely Eric Burdon. There was no imitation that night. His performance was all fire and light. It was just as soul-felt as in the early days of the Animals because great music never dies, it just carries on and often burns brighter as time passes.

Eric Burdon at 77 still carries that same torch as he once again takes to the stage reminding us of the days when he was young. But, today, he is timeless.

Eric Burdon and the Animals come to the Belly Up Tavern on Wednesday, January 9, 8pm.

The Subdudes: Where the Streets Meet the Choir

Squirrel Nut Zippers Bring Christmas Joy to the Belly Up