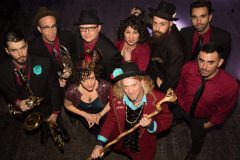 Members of the Squirrel Nut Zippers. 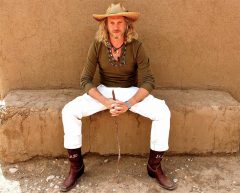 Jimbo Mathus, leader of the group.

When the Squirrel Nut Zippers’ Jimbo Mathus was growing up he was nurtured by some of the great traditions of the Deep South. As a music-loving outdoorsman, Mathus’ father, Jimmy, brought his son up in the railroad crossroad town of Corinth, Mississippi, hunting, fishing, and training horses and dogs for hunting. And there was the music. Mathus parents maintained an expansive library of diverse American music. But that wasn’t all.

Mathus family were proficient players and singers, skilled in the roots music of their times. They provided musical tutelage for young Jimbo. Through his family he was raised in a world of bluegrass, folk, and country-blues music. At eight years old he was proficient on the mandolin. By the time he was 15 he learned the guitar enough to participate in the family jams. It all happened with the help of his tribe of family musicians.

It was during his childhood in a land rich with southern heritage that he developed a passion for its history, especially its musical history. He also acquired a love for original creativity and a natural curiosity for the music of his homeland.

It began with punk music and a band called Johnny Vomit and the Dry Heaves. Punk music dovetailed into his own journey into the roots of American music, but it didn’t stop there. He put his feet onto the musical road that began at home in Mississippi and took it out to the world.

By 23, in the early ’90s. Mathus founded the Squirrel Nut Zippers with a congregation of young local musicians who knew jazz as well as they knew country music. They also had the same drive for paying homage to musical history. When Mathus’ then wife, Kathrine Whalen, Tom Maxwell, Chris Phillips, Don Raleigh, and Ken Mosher came together it was the genesis of a renaissance of a hard-to-define or pigeonhole American-roots sound. Drawn largely from the vintage approach of legends like Johnny Ace, Cab Calloway, Django Reinhardt, Raymond Scott, Fats Waller, Tom Waits, Leon Redbone, and Dan Hicks and his Hot Licks, each musician brought their own unique talent to the overall sounds. What followed was a joy to behold.

They derived their name came from the southern label for bootlegged whiskey. A newspaper once described a drunk man who climbed a tree and refused to come down even after the police ordered him. The headline read “Squirrel Nut Zipper.” But, Squirrel Nut is also the name of a caramel candy that dates back to 1890.

The combination of bootleg whiskey, a drunk in a tree, and candy includes all the elements that are essential to the band: fun, joy and sweetness, which are the main ingredients of a band that has been spreading its unique sound for 25 years.

Jimbo would agree on the musical recipe he helped create. In a recent interview in New Orleans during a rehearsal break for the upcoming Christmas Caravan tour, he said, “This tour and our music is an invitation to take a break from all the heaviness going on in the world today. It’s a time for some much needed relief.”

Indeed, from their classic album Hot to their most recent recordings of two original Christmas swing songs, “Mardi Gras for Christmas,” and “Alone for Christmas,” the band has delivered the sweeter side of human nature luring us into dance rather than argument and division with a marriage of jazz, country, blues, and old-timey music that reflects the sounds championed by New Orleans musicians in the 1920s and ’30s. It’s what roots music is all about. Especially the music of the Squirrel Nut Zippers.

When asked about how a young musicians moves from punk rock to the unique but more traditional sound of the Squirrel Nut Zippers, Mathus laughed, “Very carefully!” He said. “Actually, I got on it pretty soon… I was 23. I was curious, I wanted to know more about American music and its history. I love punk because of its originality. But then I got focused on writing and got my hands dirty into jazz and I wanted to try writing the music myself. It’s really folk music in the sense that it’s do it yourself. Really…None of us knew what we were doing. We cobbled the sound together from different backgrounds,” Mathus explained.

After beginning in a high school rock band, The End–who recorded at Sam Phillips Recording Service in Memphis–and a short but notable stint with Johnny Vomit and the Dry Heaves, one of Mississippi’s first punk rock bands, Mathus ventured out into his own version of Kerouac’s On the Road, discovering the real America in his own way. He played and recorded under the name CafÃ© Des Moines for a while, but then joined the Merchant Marines, where he worked as a deckhand and tanker man for a barge company on the great American rivers that cross the South and the Midwest, using his shore leave to travel the country on his own.

It was a combination of the years of travel of the mind and heart along with his family background in music and the land, which led Mathus to a self-realization grounded in early American music. While he was first known in the local scene for his drumming with the group Metal Flake Mother, his love for swing jazz soon took over.

In 1993, he met and soon married singer-songwriter Kathleen Whelan, which led to the founding of the Squirrel Nut Zippers. The sound was based to large degree on much of what Mathus learned from his travels and education in American history and music. They became one of the first of his generation to incorporate swing jazz from the 1930s with folk and blues into a sound all its own.

Today, it’s called Americana. But, when the band first recorded, there was no such label for any unique hard-to-categorize music. Their music took hold, however, bringing the band national and international attention. For a band going against the grain of the style of their times, the success was like a sky rocket on the 4th of July.

Their debut release, The Inevitable Squirrel Nut Zippers, delivered a fully developed feast of New Orleans old time jazz. The sessions sound as though they could have been written in the golden era of Dixieland Jazz, but the songs are original with only a few exceptions. The music lays a solid floor of brass and strings with trombones, trumpets, drums, and saxophones alongside ukulele, banjo, and jazz guitar. The songwriting was strong with the band transcending the novelty of their sound into the area of just plain great American music. This was no parody. While the album was entertaining and fun, these Squirrel Nut Zippers were dead serious about their lighthearted, skillfully woven music on this strong debut album.

It was the follow up album 1996’s, Hot, that established the band as iconic contributors to the growing movement of American roots music that was becoming known as Americana. The album went platinum. According to Mathus, “We believe that we contributed to the growth of Americana music back then. After Hot, you began to see more young people playing folkier instruments like banjo and ukulele.”

But, it was 1998 when the band would make another lasting mark on popular music. Christmas Caravan released in 1998, has become a tradition for families during the holidays. But, if you’re looking for usual familiar Christmas tunes in the band’s unique style, think again. This album consists of mostly original material delivered without the usual self-conscious Christmas pre-packaged delivery.

These original Christmas songs stand up alongside the rest of their legacy of fine albums. But, to take it a step further, these songs have added to the American Songbook of Christmas favorites. With songs like “Indian Giver,” the country-fried “Gift of the Magi,” and “Hot Christmas,” there is no mistaking that this music includes the ingredients that has helped to keep the band great.

After a hiatus or two, in 2017, Jimbo Mathus and band, which includes Dr. Sick on fiddle and banjo and Cella Blue on vocals, embarked on a southern tour of the Christmas Caravan album. It was so successful, they decided to come together and bring the Caravan westward to far-off places like San Diego and Los Angeles.

“Last year was so much fun, we thought we’d do a West Coast tour. The songs on this album really stand out. We’ve found that people of all ages come to the shows. It all comes out as joy and I’m all about that!”

The Squirrel Nut Zippers come to the Belly Up Tavern on Thursday, December 6, 8pm.

The Beat of a British Rocker Carries On: Eric Burdon’s Lion in Winter

The Kingston Trio Carry On