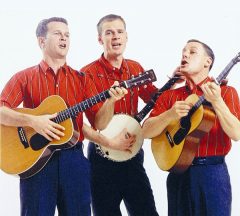 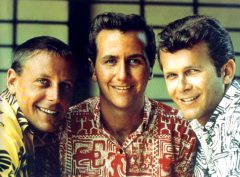 Dave Guard left the band in 1961 and was replaced by John Stewart, center 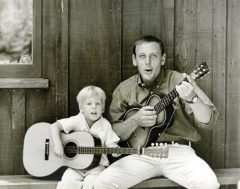 Nick Reynolds with his son Josh, who would join the trio years later 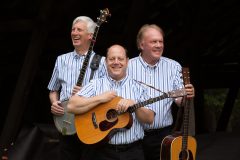 “In my youth, they changed pop music, and me with it.”
–Richard Corliss, Time magazine on the Kingston Trio

So, let’s take a trip to the past for a paragraph or two. It’s the much-anticipated Troubadours of Folk Music festival in a football stadium at UCLA in 1993. It seems like everyone is there: Arlo Guthrie; John Prine; Roger McGuinn; Judy Collins; Peter, Paul & Mary; Joni Mitchell; Odetta; Len Chandler, and the list goes on and on. Even the Kingston Trio is due to close out the first day. I find myself thinking, why them? I mean, aren’t they the Pat Boone equivalent of folk music? Aren’t they the white-bread guys, politically neutral and impossibly clean-cut who watered down folk music to make it palatable for the masses? However, that night I couldn’t been more mistaken. They contrasted starkly with the comic send-up, Folksmen, who amusingly entertained earlier that day and consisted of Spinal Tap’s, Michael McKean, Christopher Guest, and Harry Shearer. But when the real guys emerged onto the stage that summer night in 1993, the comic imitation was all but forgotten. They were quashed would be a better word. When George Grove, Bob Shane, and Nick Reynolds stepped onto the stage so larger than life, they blew our hair back like so much fierce wind. They completely shattered the old stereotype of the Trio’s safe and sanitized folk music. They were dynamic entertainers, gifted vocal artists, and charismatic stage performers delivering songs they turned into standards like “Tom Dooley,” “MTA” “Sloop John B,” and “Worried Man.” It was a revelation. It changed my life. Or, as Bob Dylan once said, “It changed my way of thinking.”

Even Joan Baez has chimed in on their influence in her memoir And a Voice to Sing With where she wrote, “Traveling across the country with my mother and sisters, we heard the commercial songs of the budding folk boom for the first time, the Kingston Trio’s ‘Tom Dooley’ and ‘Scotch and Soda.’ Before I turned into a snob and learned to look down upon all commercial folk music as bastardized and unholy, I loved the Kingston Trio. When I became one of the leading practitioners of ‘pure folk,’ I still loved them.”

And, recently among music critics, Robert Eder in AllMusic writes, “In the history of popular music, there is a relative handful of performers who have redefined the content of the music at critical points in history–people whose music left the landscape, and the definition of popular music altered completely. The Kingston Trio were one such group, transforming folk music into a hot commodity and creating a demand–where none had existed before–for young men (sometimes with women) strumming acoustic guitars and banjos and singing folk songs and folk-like novelty songs in harmony.”
The Trio also has earned a place in history with President John Kennedy and his brother Attorney General and future senator Robert counting themselves as fans.

It only took a few minutes to figure out that the white-bread-safe-politically-neutral image was also bogus.

In 1958, the McCarthy era was in its final days. While the trio rarely took overt political stands, the very act of performing songs by blacklisted folk singers was radical and unsafe. The band was founded by Dave Guard, Nick Reynolds, and Bob Shane partially through their mutual love for Hawaiian slack-key icon Gabby Pahinui in addition to Calypso music. They gave voice to the music of Woody Guthrie, Lee Hays, and Pete Seeger whose songs had been suppressed by right-wing politicians for a decade. The Kingston Trio’s very existence was based on diversity and liberal values.

When Guard left the band in 1961, young songwriter and banjo player John Stewart would join to help them continue their success. It was during the Stewart years they recorded more Woody Guthrie songs and championed one of the key statements of the protest movement, Pete Seeger’s “Where Have All the Flowers Gone.” At the time the song charted for the Trio, Seeger was blacklisted and unable to play concerts in mainstream America.

And one important breakthrough that influenced the international music industry for years to come was the popularization of the long-playing record. The Kingston Trio insisted their label, Capitol Records, release long-playing albums rather than the more popular format–45rpm–versions of their songs. The result was the most successful run of long-playing albums to date in the late 1950s. This would influence others like Frank Sinatra, Nat King Cole, and the Beatles.

In short, from 1958 until 1963, the Kingston Trio was the biggest band in America who achieved unparalleled international success playing folk music. In 1982, Chicago Tribune writer Eric Zorn wrote, “For almost five years, they overshadowed all other pop groups in America and changed the course of popular music so that their impact is largely felt to this day.”

The Kingston Trio were the first popular folk act to emerge since the Weavers with Pete Seeger and Lee Hays, who were blacklisted in 1952 for communist sympathies. The Kingston Trio emerged from San Francisco in 1958 after a successful sold-out run at the hungry i. Their first multi-million selling hit was “Tom Dooley,” a song that was featured at the funeral of the great folk-blues singer, Leadbelly. The band would continue through a six-year run of hit albums and singles, winning Grammy and Billboard awards along the way.

Ironically, in February of 1964, within a few months of the assassination of President John Kennedy, the Beatles arrived on American shores to perform on The Ed Sullivan Show. The Kingston Trio’s successful six-year run was about to end with the arrival of the British Invasion. It was the beginning of what would come to be known as the Big Hurt. But the band would not stop.
After the British Invasion arrived, the Trio’s fortune began to disappear as though they were never there. It may have been that the clean-cut image worked against them when the mainstream style of America’s youth took on a more bohemian hue. The band found themselves outdated and ahead simultaneously of their time as in the coming decade, acoustic music would return in popularity. While Peter, Paul and Mary, the East Coast trio, formed by Bob Dylan’s manager, Albert Grossman, in response to the Kingston Trio, successfully made the transition into counterculture, the Trio were shut out in the cold. However, their fans among the new youthful artists would continue to use their influence for new success for years to come.

In 2008, on one wistful afternoon in San Diego former bandmates John Stewart and Nick Reynolds sat together as their wives looked on, listening to Kingston Trio recordings. As the familiar music played, the two old friends held hands and wept. Within a few months, both men were gone to the ages.

In a conversation with Josh Reynolds, the son of Trio member Nick Reynolds said his father described the music industry’s amnesia when it came to the Trio as “The Big Hurt.” It’s not an unreasonable conclusion.
But, the band couldn’t be stopped. During their lifetime, Dave, John, Nick, and Bob saw the re-birth of the Kingston Trio’s popularity. A Fantasy Camp in Scottsdale, Arizona was formed in later decades. The gathering still brings fans and musicians together for a chance to live out their dream of playing in the Kingston Trio. The three surviving Trio members all participated in the camp, which has kept alive even after the passing of Nick Reynolds and John Stewart. And survivor Bob Shane occasional participates.

The Camp also saw the birth of a new Trio with Josh Reynolds and cousin, Mike Marvin, creating a family legacy band that, over the last few years, has served to carry on the spirit of the Kingston Trio. According to Josh Reynolds, it’s all about the songs even through 61 years of history of keeping the Kingston Trio name alive.

In 2017, Josh was given the honor, through Bob Shane, of creating a new version of the band to help continue the musical legacy in true folk music fashion, handed on to family and friends. The Kingston Trio today consists of Josh Reynolds, Mike Marvin, and Tim Gorelangton.

For 12 years before, under the direction of Bob Shane, with long time Trio member, George Grove, with Bill Zorn, and Rick Dougherty, they capably kept the Kingston Trio on stage and in the studio touring the world and releasing albums.

It is a testament to the original band created by Bob Shane, Nick Reynolds, Dave Guard, and John Stewart that the band will not be forgotten even as the mainstream music industry moves on to modern expressions of popular music.

The music of today was made possible by artists like the Kingston Trio, who have continued to produce and perform the purity of their original sound. And so, with today’s popular Americana music movement, the dynamics of acoustic music is being rediscovered by new generations. Listening to their music, it’s easy to hear the echo of those original voices who once stood tall on the American stage and changed our lives forever,

The Kingston Trio will appear at Poway Center for the Performing Arts on Sunday, November 18, at 3pm.

Squirrel Nut Zippers Bring Christmas Joy to the Belly Up

Joan Baez: In the Flow of History