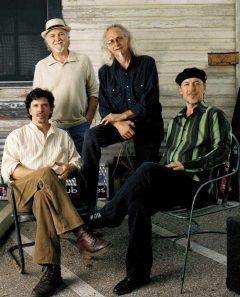 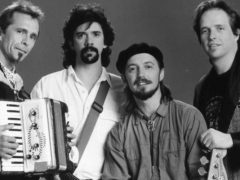 The Subdudes in 1990 with the late Johnny Ray Allen on bass (far right).

There is a reason why New Orleans is frequently referred to as “the cradle of jazz music.” It’s the place where the ingredients from the original gumbo stew of a historical musical migration took place. An international slavery port in the 1800s, it brought about a unique blend of an indigenous culture with native Americans, free African refugees, French colonials, and Deep South dirt farmers blended into a culture that connected people through spirit and music. They first called it jazz. In the intervening years, it has become much more. The title “American roots music,” which has evolved from what was first dubbed “Americana music,” is most fitting.

So, it is natural that New Orleans is where the truest Apostles of roots music, the Subdudes, were born in the latter part of last century.

The Subdudes are authentic enough to cause any fan of the Band, to turn their heads. In the 1960s, the Band purposefully sought and honed their sound from years on the trail of the Chitlin Circuit with Canadian rocker Ronnie Hawks. But, the Subdudes were born into it. They have come by their sound organically, as if the Mississippi River gifted them with their unique musical chemistry. They didn’t pursue the Music. The Music has pursued them. And it found them in 1986.

The Subdudes congregation of musicians was formed at Timpani’s, which was once the musical home of legendary pianist Professor Longhair. It was through their engagement at the famous club that they found a national spotlight, creating decades of recordings and tours. Their 1989 eponymous debut album created the band’s national reputation as a vocal and instrumental force to be reckoned with gaining a tenacious cult-following along the way. Tommy Malone gives the band its vocal, guitar and writing focal point-of-reference along with founding member and friend, accordionist John Magnie. But, equal to the task of creating a magical feast of roots music includes percussionist-tambourine player Steve AmedÃ©e and Tim Cook on bass, replacing the late Johnny Ray Allen.

With stripped-down percussion, a tambourine, an accordion weaving through intricate acoustic and electric lead guitar, tight vocal gospel-like harmonies, blue-soul-lead vocals matched by well-crafted songs. The music is pure New Orleans, a combination of rock, country, funk, gospel, and rhythm & blues, with a frequent jug band mentality employed. It’s where the river meets the church and the saloon; the sinful street and the holy choir find peace in the music of the Subdudes. It comes together as a sound that could only find its genesis in the Crescent City.

The band has two distinct eras; the first began with their formation in 1987 and subsequent 1989 studio debut album followed by a series of consistently fine recordings and historic tours. This first period would end in 1996 with an amicable break-up and farewell tour. The band decided to take new musical directions through solo careers and other projects. It was a loss for the New Orleans music scene and, through a ironic twist of fate, found them disbanding as the Americana music movement was just beginning. They re-grouped in 2003 and began a new era of recording and touring that has lasted to the present day.

The road back to the Subdudes was as natural as their beginnings. After a short stint with a band called Tiny Town, which included Pat McLaughlin, Johnny Ray Allen, and Kenneth Blevins, Malone embarked on a solo career that included 2001’s album, Soul Heavy, a critically acclaimed solid effort that included the notable, “Fat Tuesday.” The album gave Malone the chance to deepen his songwriting skills and focus on a bluesy acoustic-electric guitar-based sound. The Tommy Malone Band peaked at the 2002 New Orleans Jazz & Heritage Festival. During the same era, Malone was joined on stage at a Denver, Colorado show by John Magine, where the old magic was so distinctively re-kindled that they re-formed as the Dudes.

By March of 2003 it was clear that the Subdudes had returned in full. This began a renaissance of creativity, which had sparked the band’s formation. Like during their early days at the Tipitinas, the band was able to re-create the sound that fans had found so engaging. It was as if they had just picked up where they left off and began as if they had never gone away. They also attracted an A-list of producers with Bob Dylan’s lead guitarist, Fred Koella, who produced 2004’s Miracle Mule. In 2007, blues great Keb Mo took the producer’s reigns for Behind the Levee, an album with generous references to the effects of Hurricane Katrina on the band and their hometown.

Their latest release, 4 on the Floor, which was independently released in 2016, finds the band aging like fine wine, as they keep refining their strengths with a strong acoustic feel. As in previous releases, it is the interchange among their voices with the good-time feel of their instrumentation that raises the spirit. More than any of their past albums, 4 on the Floor carries a joyful, inspirational full-gospel tilt to it. There is the feeling of the warmest, most inclusive and holy Pentecostal church meeting coming to the altar of a New Orleans honky-tonk. Once again, the church has joined the saloon.

Most recently, as they begin a North American tour that includes their only stop in the southland at AMSD Concerts (Acoustic Music San Diego), they are engaged in a fund-raising campaign for the next album. Prior to the current tour the band has been hard at work in the studio putting finishing touches on the latest release. As they continue to build their legacy, they have brought New Orleans to the world through the finest of music that carries with it good will and a kind of musical ambassadorship that is sorely needed in America today. There appears to be no end in sight for one of America’s best roots bands. As the closing song, “Prayer of Love,” from Behind the Levee says

In the troubled, soul-searching time
Have faith, my sister, I’m sure you’re going to find
Find the child within, true love, and good friends
This is my prayer of love, my prayer of love to you.

Can I get an Amen?

The Subdudes are coming to AMSC Concerts on Saturday, February 23, 7:30pm. For detailed info: http://www.amsdconcerts.com/

The Beat of a British Rocker Carries On: Eric Burdon’s Lion in Winter