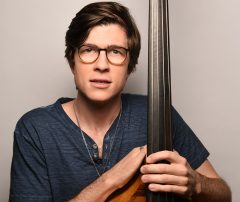 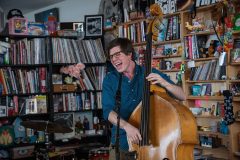 Mulvahill performing at one of NPR’s Tiny Desk Concerts. 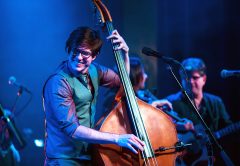 Scott Mulvahill plays a quick triplet that drops down to a low note on his bass. The sound is loose and growly. His right hand makes contact with the ebony fingerboard, producing a sharp slap; he then raps on the body of the bass. He plays a high note, sliding it up and letting it ring out. The timbre is resonating and the bass and slaps make a rich mix of rhythm and melody line.

With his conservative glasses he looks like an economics lecturer, but Mulvahill’s head bobs back and forth as he shuts his eyes in concentration. The riff continues, and Mulvahill sings. His baritone is soulful, and the song has an extemporaneous feel to it, almost as if the lyrics are coming to him like a free-form beat poet. It’s just Mulvahill and his bass, but the riff, the phrasing, and everything put together is mesmerizing.

Scott Mulvahill is a new sensation, a rising star in the American music scene. After years of performing with Ricky Skaggs and his Kentucky Thunder bluegrass band, he is breaking out on his own with a new CD, Himalayas, and headlining a new tour with his band.

One of the striking things about Mulvahill–something that is quite apparent when he plays in a pared-down setting, just him and his bass–is the power with which he performs. He sings in a full-bored style that is reminiscent of country singers from generations ago. I’m given to think of Ray Price and Johnny Cash, but he adds some soul to the mix. Although there is a lot of country in his singing, you would make a mistake if you called him a country singer. It’s the same with his band. I hear a Dobro, an instrument that cries out, “This is a bluegrass band!” But the overall sound of Mulvahill and his band is much more than that. Yes, there is country, but you can hear shades of soul and a twinge of jazz, too.

Mulvahill was drawn to the bass in his early teens. “When I was 14 at summer camp a friend of mine had a bass guitar, and I thought that it was the coolest thing,” he says. “Later on, my parents were talking to me and my brother and they asked if we’d like to have a guitar, and I said, ‘How about a bass guitar?’”

He played in various garage bands in high school and went off to study music at North Texas State University, majoring in jazz studies. Although he still plays the electric bass, he was drawn to the upright bass, the traditional instrument of the low end in jazz ensembles. “The upright bass has an artistic voice and the ability for storytelling,” Mulvahill says.

After college, he made his way to Nashville. Mulvahill had a hunch that the city famous for country music and the recording industry would work for him. And it did. Ricky Scaggs, singer and multi-instrumentalist, who is probably the biggest name that has kept bluegrass alive, hired him. Mulvahill credits Skaggs with teaching him a lot about music and performing. “Ricky took me on when I was really green,” he says. “He taught me a lot about bluegrass music, what that music is all about and how to approach it.

“Music and performing wasn’t something that he talked to me about, but I learned by just working with Ricky night after night. He taught me how to approach a solo. Ricky’s solos were about 80 percent the same, night after night, and about 20 percent where he was probably thinking, ‘I don’t know what is going to happen,’ where he was taking things up to the edge. And that’s important. It’s just impossible to be at the edge all the time. You can’t hold up doing that. And unless you have some of that, that spontaneity, you degenerate into predictability.”

During his tenure with Skaggs, Mulvahill performed the song “20/20 Vision,” which opened with just Mulvahill playing bass and singing. This inspired him to write songs on the bass and make the instrument the complete accompaniment of harmony and rhythm for his voice.

He says that as a songwriter ambiguity is one of his strengths. In the same breath he mentions Paul Simon and James Taylor as being two of his biggest influences. Just like Simon and Taylor, Mulvahill’s songs can mystify and leave you wanting more, eager to hear the song again. Some 47 years later, I’m still stumped as to what exactly Simon and Julio did down by the schoolyard and stumped by Taylor’s sweet dreams and flying machines, but I’m still enchanted to hear those songs again. I expect that decades from now Mulvahill’s songs could have the same effect on me.

So this mystery, these enigmas that can beguile a listener, the matching of a good tune to a great lyric, what is the secret to crafting such things? “The main thing is to just take the time,” Mulvahill says. He has no particular process for putting a song together. At the beginning, he might start the work on the guitar; or he might start the process on the bass. The whole thing might start on guitar and then switch to bass. Those particulars matter less than the most important part of the process that Mulvahill emphasizes: editing. He will run through a song again and again to get it right, changing a lyric to make it more descriptive. “Writing a song is a difficult thing to do. It takes time,” he says. “I can write a song fast, but for most of my songs the music develops along the way. If I think of a line or a riff if or if I like something, I’ll remember it and put it in the song.”

As far as his influences on the bass, the 30-year-old mentions two bass gods of the seventies–Jaco Pastorius and Stanley Clarke–who transformed the whole idea of what an electric bass could do. More recently, he cites Victor Wooten’s influence, who “showed me what the bass was capable of. The instrument has a lot to it that is overlooked,” he says.

“I wanted to sing and play the bass. Doing both has certainly presented a learning curve. I had to start out by practicing really slow,” says Mulvahill. Singers tend to pick up guitars and strum while they sing their songs. It’s rarer to see the bassist playing and singing. There are reasons for this. While not a high wire act, it is more difficult to sing and play the bass. For one thing, there aren’t any frets. And the bassist, in creating the bottom end of a tune, is setting up something of a counter melody. So, someone singing and playing the bass is doing two things at the same time. It’s just way more complicated than just strumming on a guitar. If you want an idea of what a singing bassist is trying to achieve, try typing the preamble to the Constitution while reciting the Gettysburg Address out loud. Go on, give it a try. Not easy, is it?

One thing about a Scott Mulvahill performance is that there will be surprises, one of them being the great facility with which he sings. A natural baritone, he will nonetheless break out into a soaring upper register that he seems to do effortlessly. “I was a player before I was a singer,” he says. “And I admit that I wasn’t good at it at first. I worked at it. I’ve certainly improved my range.” As far as vocal approach, he has mined the singing of the Beatles and Ray Charles. His phrasing can sound off the cuff. As I said before, the impression is one of a spontaneous, free association. He says that, once again, he is emulating Paul Simon and the ’70s hit maker’s ability to be conversational in his approach.

The 30-year-old Mulvahill is a veteran performer, but he is excited to be putting together his first tour as a headliner. “As a headliner, you get to put your vision first. You don’t get to do that as a bass player,” he says.

And, after so much time as a sideman, being the bass player and giving support to other musicians, Scott Mulvahill is eager to make that vision real. “I give the audience a piece of myself and hopefully their lives are better for it,” he says. “A lot of what I’m working on with my songs is facing your fears, facing yourself, looking at the different aspects of yourself. Life can be hard, but what I try to convey with my songs is letting people know that struggle is meaningful. The life that you are living is worth that struggle.”

DAVID LINDLEY: A Journeyman in the Truest Sense

The Subdudes: Where the Streets Meet the Choir