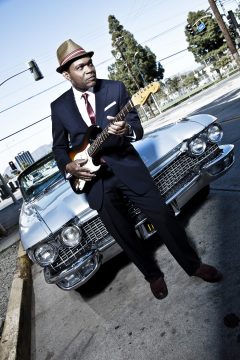 Some artists define themselves so well, putting their egos aside for the larger cause of the music they serve, just the mention of their names can cause your mind’s ear to sweeten with the memory of the sounds they have recorded in studio and live performance. The same artists are associated with many of the icons they modeled themselves after who came before them over the last 75 years. When the name Robert Cray is mentioned in conversation, a line-up at a music festival or with the release of a new album, not only is blues called up in all of its rootsy American legend but also the purest form of electric blues that was first heard on record by the likes of Muddy Waters, Howlin’ Wolf and, Elmore James. At 60 years old, Cray stands easily along side such giants and also with his own living mentors like Eric Clapton, Buddy Guy, and B.B. King.

There is a purity to his sound. Indeed, there is a purity to blues in general that always remains just out of the reach of definition. It’s one reason why today blues has found a welcome home in the Americana music culture, which seeks to give home to those hard-to-pin-down artists, who chase the freedom to play from their heart rather than to follow trends and commercial success. When he first started showing up on national festival stages and especially with the release of his Grammy-winning Strong Persuader, he was known for bringing a fresh breath of life to America’s oldest popular music genre. It is a form of music that found its way through the fields of the deep South and the muddy, often murky racism found on both sides of the Mason Dixon line. By the time it found its way to the streets of eastern towns in the early 20th century, it was being played on the streets and saloons for pennies. Not long afterward, the music that largely came from acoustic and rural origins became known as “race” music and was put on record. Artists like Robert Johnson turned it into such an electric and passionate fury, it became known as “the devil’s music.” If so, the “devil” had really good taste! But it was at the crossroad between the rural and the city life, the acoustic and the electric, the devils and the wayward angels, where young Muddy Waters and Howlin’ Wolf began to emerge. Languishing in relative obscurity, but the time these artists were being discovered by young British youth in the ’50s, they were already growing weary and old from years of excessive living and hitting it hard in the taverns of the underside of America’s backroads. The late ’60s brought the revival of the music just in time to catch the best of the blues legends for one international last hurrah and especially significant, in time for great guitarists like Eric Clapton and Jeff Beck to pay them tribute.

By the time Robert Cray came along, he had already counted himself one of a newer generation of blues artists who had drawn not only from the roots of the music but also from the great classic blues revival that came out of England. In the mid-’80s, the music had settled into American music, almost as though it had come full circle and again was safely defined as “ethnic” music, using new terms like “roots” music. But, it was in the early ’80s when an untarnished wild-eyed white blues player, Stevie Ray Vaughn, broke out of the chains of genre safe-categorization onto the national scene and caught the attention of the Rolling Stones, David Bowie, and most significantly, Eric Clapton. By 1986, after six years of hard work in the studio and touring, Robert Cray would release Strong Persuader. With the milestone album, he gently turned the music away from guitar showmanship to blues artistry. He would do many of the greats, from Muddy Waters to Eric Clapton and Stevie Ray, one better. He refined the sound, blending his guitar into well-crafted songs, simple arrangements, and pure straightforward music that found appeal in a mass audience who had not always warmed up to blues. It was blues with a twist of R&B.

Strong Persuader re-opened the door for the same kind of sound that began decades before at Stax Records when Booker T. first put his keyboard onto tracks like “Green Onions.” He revitalized blues and like any great artist, brought in new influences — like soul and jazz-without compromising the original form. In fact, in many ways he helped to make blues more viable and relevant to a larger audience.

According to Cray on his website, “Blues is one of the foundations of our music, but it’s not all that we play.” Cray continues,”When I first started playing guitar I wanted to be George Harrison — that is, until I heard Jimi Hendrix. After that I wanted to be Albert Collings and Buddy Guy and B.B. King. And there are singers like O.V. Wright and Bobby Blue Bland. It’s all mixed up in there.” The constant questions that come up with successful artists and their is music is “where does this come from?” To which Cray responds,”Every time somebody asks me about where my music comes from, I give them five or six different directions — a little rock, soul, jazz, blues, and a little gospel feel. There are some other things that maybe fall in there every once in a while, like a little Caribbean flavor. You just never know. I always attribute it to the music we grew up listening to and the radio back in the ’60s. It’s pretty wide open. It’s hard to put a tag on it.”

If his comments reveal anything, it’s simply that American music is best when it is free to explore its freedom within its form. This is not such an easy task and takes an artist with exceptional vision to successfully make this happen. Cray is one of those rare American artists. In this sense, he is a pioneer of Americana music today. He blazed a trail rooting himself in blues and blending so many different elements, the result was impossible to place safely in any one category. Good art begs to not be chained down in a tradition but instead seeks to use it as a starting point. It’s how rock and roll, jazz, and blues came to be so many years ago. And Robert Cray continues in this same tradition.

One of the keys to the success Cray has found in his band has been the consistency and the straight-forward approach to their playing. Along with Robert Cray on vocals and guitar, they include Jim Pugh on piano and Hammond organ, Richard Cousins on bass guitar, and Tony Braunagel on drums. Cray began working again with Richard Cousins after he had played a series of shows at Royal Albert Hall, which was released on the Grammy-winning Live from Across the Pond, in 2006. Cousins was one of his original players and oldest friends; it was a welcome reunion. Cousins began with Cray during his original days in Eugene, Oregon in ’74. He was with him during the days of 1986’s Strong Persuader and 1988’s Don’t Be Afraid of the Dark. Both were Grammy-winning albums. According to Cray on his website, “I’ve known Richard for 40 years,” Cray says. “We go back to 1969, and we grew up in the same area together. We’ve always had a really good rapport together stage-wise. Richard and I have remained the best of friends ever since he departed way back in ’91. I’d still see Richard, whether it was in the States or in Europe, where he still lives. He’d always come to see us at the gigs. We always remained close. We talked on the telephone all the time. I wanted to make personnel changes in the band, so I asked Richard to come back.” Cray said.

After winning a total of five Grammy awards, Cray was inducted into the Blues Hall of Fame in 2011. Over the years, along with his close friendship and collaboration with Eric Clapton, he has continued to be active on the international stage at festivals and live performances. His latest album, Nothin’ but Love, on Provogue Records reached #2 on the blues chart and was a critical success. It was his first studio album since 2009’s This Time, another critically successful album that sold well on the blues charts. In 2010, Cray released his third live album Cookin’ in Mobile, recorded for CD and DVD in Mobile, Alabama. And just last month, Cray appeared in the theatrical release of Eric Clapton’s Crossroads Guitar Festival 2013. The one time showing was released in 500 theaters from an earlier concert at Madison Square Garden. The concert also included Allman Brothers Band, Blake Mills, Booker T., Buddy Guy, Derek Trucks, Doyle Bramhall II, Eric Clapton, Gary Clark Jr., Gregg Allman, Jeff Beck, John Mayer, Keith Richards, Keith Urban, Los Lobos, Robert Cray, Sonny Landreth, Vince Gill, and Warren Haynes.

For Robert Cray, today, the road shows no signs of coming to an end as he continues to record and tour. His creativity flows with so much energy, in concert it’s hard to stay in your seat. His is the kind of blues that makes the audience get up and dance. That’s reason enough to celebrate this one-of-a-kind American artist.

And now, for something completely different! ANDA UNION pays a visit from Mongolia

Check Your Ego at the Door: Transformation and Rejuvenation at the Steel Bridge Songfest