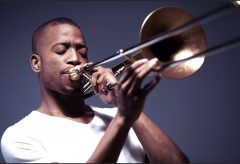 At the end of the day, I’m a New Orleans Musician. Whatever that means.
–Trombone Shorty

This is a curious comment from one of New Orleans’ most important new artists. It begs the question: what does he mean? Is the meaning of the role of a New Orleans musician that hard to define?

Here is a theory about one meaning of being a New Orleans musicians: As we move well into the 21st century, the world has changed. In the last 20 years it’s been quite a ride. Through it all, one thing is clear–politics divide us while music unites us, not that the two exist in polarities. But, music allows for diversity, while politics reaches (and stretches) for a brain-numbing unity based on exclusion. In fact, music has the power to make friends of total strangers with opposing political views.

The city known, for its crescent shape, has shown us true unity through its love for the music that was born there. Through one of the worst hurricanes and floods in U.S. history (and the neglect that followed), the cradle of jazz, known as New Orleans, has kept its spirit alive through the celebration and healing energy of music. Therefore, the role of a New Orleans musician is nearly priest-like in what they conjure. So, at the end of the night, the New Orleans musician means a lot. Trombone Shorty is no exception.

The 31-year-old musician is one of the latest examples of a gifted talent that has risen from the culture of the city. His most recent album, Parking Lot Symphony, is an illustration of an artist finding his own place on the national–and international–jazz scene as he emphasizes a diversity of styles, imagination, and accessible music that defies categorization.

Indeed, many in the music world have discovered that much of the music being made by artists like Trombone Shorty is hard to pin down. When Americana music was defined in the mid-1990s, the term was used as a category to market country artists who were being passed over by mainstream Nashville at the time. However, the genre has evolved into an umbrella where the hard-to-pigeonhole music can find an audience. In this sense, he is an Americana artist. But, he has found a home in the world of jazz and rhythm & blues as well. He goes to the roots of each musical form and finds what is best in it as he integrates into his own sound.

Parking Lot Symphony plays like one of those irresistible Mardi Gras parades as it moves through a joyous collection of funky jazz, R&B, and hip-hop. His New Orleans orientation dances through the songs, inviting us to dance and celebrate.
Trombone Shorty is an artist in his prime who hasn’t seemed to find the brakes or a lower gear on the vehicle of his career. During his short time in the national spotlight, he has scored five gigs at the Obama White House as well as backed Madonna and Macklemore at the Grammys; he’s played on sessions with She & Him, Zac Brown, Dierks Bentley, and Mark Ronson; he’s been the opening act for the Red Hot Chili Peppers; he’s appeared in Foo Fighter’s HBO documentary, Sonic Highways; he was in six episodes of HBO’s critically acclaimed series Treme; he’s provided the trombone-voiced adults in The Peanuts Movie; he closed out the New Orleans Jazz & Heritage Festival, a tradition that has been performed by the likes of the Neville Brothers and Professor Longhair. With all of this, he also completed a children’s book about his life, simply called Trombone Shorty, which was given an esteemed Caldecott Honor Book award in 2016.

Troy Andrews (AKA, Trombone Shorty) was born in New Orleans in 1986. He was raised in the legendary mid-city neighborhood known as Treme. He began playing trombone when he was four, the same year he appeared on stage with Bo Diddley at the New Orleans Jazz & Heritage Festival. He laughs today that his family pushed him toward the trombone because they didn’t need another trumpet player in the family. He had his own band by the time he was six. His childhood education was at New Orleans Center for Creative Arts.

In 2005,when he graduated from high school, Andrews was recruited into Lenny Kravits’ band for a world tour. During the same year he joined the New Orleans Social Club, a band that was formed to record an album to help New Orleans after Hurricane Katrina. In 2006, Andrews worked in Abbey Road Studios with U2, which led to playing with the famous band and Green Day on Monday Night Football at the re-opening of the New Orleans sports arena after Katrina.

From that vantage point, Trombone Shorty’s trajectory was headed for the stars. However, his career is not based on over-produced dance music. Parking Lot Symphony is a demonstration of an artist who understands jazz, blues, and rhythm & blues traditions. This album, as well as his past work, build on this knowledge as he adds tastes of funk, hip hop, and rock. The album begins with a dirge to the 19th Century voodoo queen Marie Laveau. As the song starts the brass moves quietly and slowly into place, as if it were a film that opens in a dark alley on a rainy night. The Toussaint-like trombone supports a soulful trumpet solo and we’re on our way into the New Orleans city lights. Then, the curtain opens on Andrews’ unique take on the moods and stories that run like ghosts in the New Orleans night. Along the way he manages to capture the mix of nighttime music, which re-interprets the city into a place of joys, heartbreak, and, ultimately, a celebration of life built on love. As Andrews sings on the song “Dirty Water,” “When you believe in love, it all works out.”

Produced by Grammy-nominated Chris Seefried, each song is given special treatment, allowing them to reach their full potential. Seefried shows an essential understanding of the roots of all the musical tapestries that are explored and successfully blended on these 12 tracks.

With such an active career, Andrews has also been a living example of believing in love. In giving back what he was given in life, he founded the Trombone Shorty Foundation, which began as Andrews’ Horns for Schools Project. With the city government, he donated quality musical instruments to the schools in New Orleans. The mission of the foundation is revealing, as it states: “to preserve and perpetuate the unique musical culture of New Orleans by passing down its traditions to future generations of musicians.”

So, this is the case for the meaning behind Trombone Shorty’s self-effacing quote, “What does being a New Orleans jazz musician mean?” By the man’s own example, it means carrying on and handing down a legacy of musical tradition even as he forges new ground that is true to the times. So, as his foundation creates after-school music programs, Andrews has shown that giving back is one meaning of the New Orleans musician. This may be his greatest achievement.

Trombone Shorty and Orleans Avenue come to the Belly Up on Saturday, December 30, 9pm, 143 S. Cedros in Solana Beach.

Me and Kris Kristofferson: A 50-Year Cycle of Story, Song, and Heroes