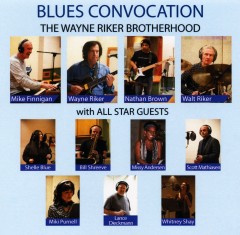 2016 may just turn out to be a banner year for guitarist Wayne Riker, who has just released his ninth studio album, Blues Convocation. Aside from recording, the musician, who can now add the title “author” to his resume, has been putting the final touches on his book of memoirs slated for release sometime this spring or, at the very latest, during the summer solstice. According to Riker, his autobiography follows him on his “unlikely journey since picking up the guitar in 1965.”

Although it’s been over five decades since the blues master first wrapped his fingers around the frets of a six string, all those years spent perfecting his craft have certainly served Riker well, as can be heard on the upbeat, rollicking Blues Convocation. Each track showcases Riker’s expertise as one of the most proficient blues guitarists in his field.

Riker gets down to serious business on the new disc, flexing his musical mojo alongside some top-notch veteran players. With Mike Finnigan on keyboards, who also lends his vocals on two tracks; Nathan Brown on bass; and Walt Riker on drums, there’s no skirting around the fact that these professionals know a thing or two about what it takes to successfully commandeer their prowess through a genre of music that, left in the hands of amateurs, might have come off sounding like a blues parody of itself.

On the opening track, “The Stumble,” Riker wastes no time in lighting the fuse as he kickstarts the celebration. “Something You Got” is a sultry, gospel-inflected slow burner and the perfect vehicle for its two vocalists, Missy Andersen and Finnigan, who manages to sound a lot like Gregg Allman here. The song, graced by alto saxophonist Bill Shreeve, grooves as if it had been officially appointed the instrumental closer for an episode of “Saturday Night Live,” circa 1979.

“Caldonia” be bops along as it’s given the star treatment by Riker and Shreeve, who wields his tenor sax like nobody’s business. The tune’s infectious energy swings in all the right places, as vocalist Scott Mathiasen seemingly makes it his mission statement to croon his way to stardom–that’s just how mellifluous his voice is. Everything slows down long enough for everyone to catch their second wind on “Key to the Highway.” With cameo appearances by Whitney Shay, Shelle Blue, and Missy Andersen, the song sounds as if Leon Russell had joined in on the recording, thanks, again, to the versatility of Finnigan’s bluesy vocals.

Earle Hagen’s classic “Harlem Nocturne” winds its way through smoke-filled jazz clubs, as the Wayne Riker Brotherhood revisits a standard that has been covered by everyone from Duke Ellington and Quincy Jones to the Viscounts. Riker makes sure there are no hollow chambers in this one by filling it up with his trademark, rockabilly riffs.

Chalk it up as another surefire winner for Blues Convocation and our man of the hour, Wayne Riker.