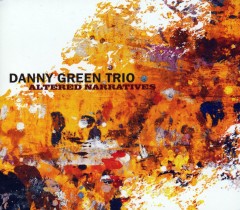 Danny Green has established himself as one of the best jazz pianists and composers in Southern California. His second CD with his trio, Altered Narratives, displays the individual talents of Green, bassist Justin Grinnell, and drummer Julien Cantelm as well as what this unit has evolved into since the band’s inception five years ago.

The trio’s first CD, After the Calm, had Green and his band mates dashing through some “Giant Steps” changes. This was the band at play, and it was like listening to a bunch of kids in a musical romper room. For Altered Narratives Green wrote numbers with longer chord patterns, allowing himself and his bandmates more room to stretch out.

With Altered Narratives Green wants less to play around and is trying to communicate on a deeper level with his listeners. The disk thus winds up being a more inviting musical experience. I enjoyed After the Calm immensely; the playfulness of the trio was delightful. But I wound up being more moved at the greater sense of depth that comes across with Altered Narratives.

What sets apart a great number of jazz performers is the melodic structure of their solos. Chet Baker, Paul Desmond, and Django Reinhardt (when he wasn’t blistering the fingerboard with two-finger lighting) created solos that you could almost sing along with. Green shares in that capability, creating lines that are highly inventive and nonetheless quite musical. His usually restrained comping with his left hand accentuates some of the lightness and lyricism of his solos.

In the five years this band has been together Grinnell and Cantelm have grown into a solid rhythm section. The familiarity and trust that develops in that amount of time gives both of these musicians a great deal of freedom in their roles. Also, the interactivity they share with Green makes this a particularly exciting trio.

While not a suite, Green adds strings to three of the tunes in the middle of the disc. Among these, my favorite is “Porcupine Dreams,” which, by the end of the tune, turns into an engaging battle of the tempos.

There are 58 minutes and 47 seconds of music on this disk, just one minute and 13 seconds shy of a full hour! As usual, I give out bonus points for CDs that contain as much music as they can. Eight and a half bonus points for Altered Narratives!

Recorded in New York City at Sear Sound, the sound, production, and recording quality of this disc are tops. The ambiance, which adds a lot of warmth and verve to this recording, sounds natural, coming from the acoustics of the room, rather than reverb and echo added later on the board. The piano sounds great, with a lot of clarity and depth. A shout out to whomever tuned the instrument. Great job!

Another solid effort from the Danny Green Trio, Altered Narratives is highly recommended for anyone who enjoys jazz performance at its best.