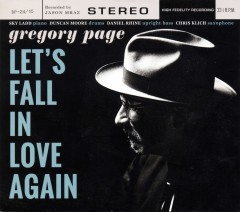 Let’s Fall in Love Again is the latest from Gregory Page, and happily it is another trip to Nostalgia Town by the local singer/songwriter. The London transplant and one-time member of the Rugburns has been performing and releasing albums steadily since the late 1980s, mostly as a solo artist. His sound has been profoundly influenced by his longtime interest in old records, like the thousands in old friend (and Troubadour contributor) Lou Curtiss’ Folk Arts Rare Records store. Page began producing albums that captured an elusive 1920s and 1930s Tin Pan Alley sonic vibe, made especially effective by his crooning and stripped-down arrangements that are snapshots of old 78 RPM moments.

Not all of his releases have been trips on a time machine, but even his straight-up original folk music retains hints of an affection for what has come before; he has released albums that include big band sessions as well as albums with both standards and his own compositions, which blend quite seamlessly into the trip to yesteryear. His 2010 disc Heartstrings, reviewed in these pages, was nearly exquisite in capturing a pre-WWII night club atmosphere, with originals that dovetailed perfectly with a smooth cover of Edith Piaf’s “La Vie En Rose” to an extent that they sounded like they were written and sung in the same place and time.

The new album again mixes originals and covers. The session is played by Sky Ladd on piano, Chris Klich on sax and clarinet, Daniel Rhine on upright bass, and Duncan Moore on drums; John Rekevic and Tony Guerrero add horns in spots. The crew are smooth pros who vanish into the songs the way the bands did on the old records. Jason Mraz recorded, keeping things clean and quiet.

“More than You Know” starts off three laid-back, keyboard-based Tin Pan Alley tunes that are perfectly realized with Ladd’s piano framing Page’s silky vocals. He has modeled his style on Al Bowlly, a South African-born British singing sensation from the 1930s who has been called both the inventor of crooning and the first true pop star. The arrangements here make the most of the mellow nature of the material, as Klich gives “The Glory of Love” some oomph with some punchy sax–but not too much. “That’s You” is a catchy original and sounds, appropriately, like it was written 80 years ago.

“I Can’t Give You Anything But Love” is another very familiar standard, but Page and band manage to pull off tunes like this without any inclinations to hit “skip.” The vocal hits all of the bridges, and diminished and augmented tones are sweetly nailed; it isn’t as easy as these guys make it sound. Page’s best original here, “The Perfect Love,” is fully realized as he promises a lover that he will never always be there. Nice trumpet decorations by Guerrero on this one, the disc’s longest track.

Gregory Page’s Let’s Fall In Love Again is music for people who like good music, unhurried and proven by time, performed by pros who do it justice.