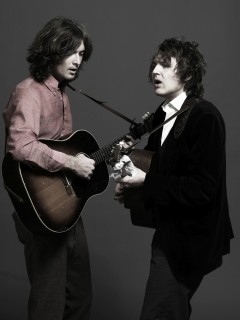 There are the those voices that ring in our memories. Some are singular and scream with passion that demands to be heard. Elvis, Jim Morrison, and Bruce Springsteen can be counted among these. Then there are the interchangeable harmony singers whose voices weave around each other in a way so seamless, the voices carrying each strand of harmony and melody become one. The Beach Boys, the Beatles, the Everly Brothers, Simon and Garfunkel are just a few who have caught our attention and our hearts over the years. As Americana music has forged its way, the memory of these voices has found its way into newer younger artists as they develop their style and soul. When Joey Ryan first heard Kenneth Pattengale at a solo concert in their mutual hometown of Eagle Rock, California, he must have heard the faint echo of those voices calling when he saw him in concert one evening in 2011. Although both Ryan and Pattengale already had careers long enough to find themselves both at a crossroads, they had no way of knowing then that a new corner would soon turn up, which would lead to adding their harmonic vocal sound to a new pantheon of upcoming folk-based Americana artists on the brink of a wider success and a broader audience than they had ever imagined for themselves.

Although the band is still in its infancy the success and attention they have received has been intense. After a successful performance at the 2011 SXSW as the Milk Carton Kids, they were signed on to a North American tour as opening act and back up band for veteran singer-songwriter Joe Purdy. From such a strong vantage point they began hitting all of the sweetest spots of success for a young duo, including the release of two strong albums, appearances on such Americana friendly media outlets as NPR and the intriguing Tiny Desk Concert and late night talk show Conan O’Brien. When Grammy-winning singer Sara Bareilles Tweeted, “Do yourself a favor and pick up the Milk Carton Kids. Wow,” their fateful success was sealed. Not only would this result in a strong following on social media sites, but it would also lead to enviable tours during 2012. After the release of two albums in 2011, Retrospect and Prologue, the following year found them on enviable tours with the Old Crow Medicine Show and the Lumineers. They also appeared on National Public Radio’s Mountain Stage concert. Wider exposure was gained when two new songs, “Ashes and Clay” and “Jewel of June,” were used in the soundtrack for Gus Van Zandt’s (Good Will Hunting) new film The Promise Land, starring Matt Damon and John Krasinski(“The Office”), leaving them open for a potential Oscar nomination. The March release of their outstanding new album, Ashes and Clay, has the duo poised for 2013, which will find them headlining their tour and festival appearances including an upcoming headlining Australian tour and appearances at the prestigious Telluride Bluegrass Festival and Newport Folk Festival this summer.

Although the past two years have been like a whirlwind tour in a textbook career for success in the indie music business, it came after years for each artist as solo performers in the often-neglected L.A. folk and Americana music scene. Ironically, their first album, Retrospect, reflects their solo careers prior to formation as a band. Rather than releasing an album of all new material, they instead recorded a live album in Ventura, California, of past songs. According to Joey Ryan in a recent interview in No Depression their reason was a desire to pay tribute to their past and their future as a band, “Retrospect was a concept of sort in that it consists entirely of songs we’ve written and released in our solo careers, now arranged for the burgeoning duo.” The album is a clear-eyed backward glance or, as Ryan put it, “burial” of their solo careers dating back a decade before their first meeting. The album succeeds in bringing something new to the songs they had been performing solo and although it was without the name the Milk Carton Kids, it is clearly the first step of hearing those two voices joined in a clear-as-spring water harmony sound.

In yet another twist of harmony, their actual debut album as the Milk Carton Kids with all new songs written for the duo, Prologue was written as they were rehearsing for the Retrospect concerts. As they rehearsed the songs for their first shows from their past solo careers, the material for their new album emerged simply and without force or pressure. The result is an album of freshly created songs in the eye of the discovery of a new, original sound that rings with a revitalized sense of urgency. As Ryan put it, “Prologue was the result of excited and fevered discovery of each other’s processes and of being at the beginning of something we felt was important.” And as they wrote and recorded the aptly titled Prologue, something important was discovered, not only for them, but for the world of folk music.

If their first two albums defined the direction the duo was taking — a self-described minimalist approach with two voices and two guitars — their outstanding new album, Ashes and Clay, is a bold statement confident in this approach. The songs echo with a timeless soul-searching that peers universally into the American soul of the last century. And although many of the songs could have been written in the early part of the 20th century, they accurately reflect the uncertain socio-economic and spirituality of the second decade of the 21st century. Such is the way when folk music touches just the right nerve in the American consciousness. But, with the sweetness of the harmonic and simple musical sound, like other classic forms of American folk and country music, the irony lies in the multiplicity of emotional texture found in the lyrics. There is just the right balance of despair and hope found in the title track of the new album, which is echoed on nearly every remaining track. It is possibly the most deceptively complex and haunting album of song writing and performance since Gillian Welch’s The Harrow and the Harvest.

And, like all of the best folk music of time’s past, there is a gentle and generous ethic to their career thus far. This is reflected in free downloads of their first two albums Retrospect and Prologue and on their website. This is often done when an artist is at the beginning of their career prior to success in order to nurture their audience. As Ryan explained in No Depression, “First, from the very beginning, we considered ourselves a live band. We started touring immediately and haven’t stopped. Making Retrospect and Prologue available for free was a part of that declaration, and in a practical sense made it possible for our audiences to grow quickly as people shared the albums with each other and their friends much more enthusiastically than we could have imagined.” The Milk Carton Kids have continued to do this with these two albums. Ryan elaborated on an even deeper motive for the free downloads. “More ideologically, we learned that giving the albums away and asking nothing in return represents a powerful promise: that our offering here is art for its own sake and that as much as possible we’ll keep the process of marketing and commercializing it out of the relationship.”

They have also taken this ethic a step further on their website in offering young artists the opportunity to upload covers of their songs. This kind of generosity and acknowledgement is the what has distinguished American folk music from the often elitist mainstream of the pop music world. This is also the kind of opportunity that allows new and undiscovered talent the chance to be discovered and to grow.

While the Milk Carton Kids are just in the first stages of a bright and promising career, their success can be found in the simple, honest approach and their exceptionally gifted songwriting. But, what pushes them into the land of those ageless and timeless harmony vocal artists of times past, whose craft and appeal seems to grow with age, is the single voice found in the duo’s vocal pairing. Their minimalist approach allows that sound to be even more profound. And it is the trust in that approach that gives their studio work and live performance such a wide appeal. It’s the voice and the even deeper harmony of lyrical songs that will allow the Milk Carton Kids to continue on the road to success in Americana and folk music during the years to come.

Fishtank Ensemble: A Treat for Your Eyes and Ears