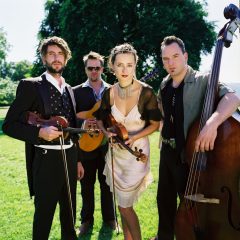 The Fishtank Ensemble have history. Not only as a band, but they have also successfully blended hundreds of years of music, tracing a heritage rich with substance, style, and a near overdose of hot-blooded passion. On first listen, the term “gypsy-jazz” will be among the first things that come to mind. It is hard to mistake the clear guitar and fiddle once mastered by Django Reinhardt and his peers in the 1920s Paris. But, today the common term, gypsy, is thought of as a kind of romantic figure-the bohemian nomad in horse drawn carriages and unconventional lifestyle of a nomad. They were always, throughout history, outside the circle of conventional and “civilized” society. But for the original culture of those we call gypsies the word has become a kind of insult.

Their orgins sprang from the Romani society which was part of the caste system of Northern India. They were swept out of the area for unknown reasons by the Muslim Invasions around 1000 AD. However, theories have persisted that the reason for their treatment and constant banishment was due to an increasingly domesticated society’s reaction to their music, dance, and performance as a way of life. To the majority in the static, often dull and poverty-driven caste system that had developing the East, the Romani population was viewed as the lowest of society because they were devoted solely to music and art.

But, wherever the Romani society traveled, they brought with them various forms of music and dance. They spread throughout the Middle East and eventually found their way to Eastern Europe. Their musical influence had the greatest impact on Russia, Romania, and Hungary. They even influenced classical musicians like Franz Liszt and Johannes Brahms. Along the way, as they moved from India, Russia, Spain, Greece, and eventually into France, the music they collected from each region also brought fresh new instruments and arrangements. Like their lifestyle, the music they produced knew no boundaries. By the 1930s, a remnant of what the Romani’s had been doing for so long was blended with American jazz thanks to the guitar genius of Django Reinhardt and the now growing, Gypsy jazz movement was born.

Fishtank Ensemble’s history may be similar in a more minute but just as universal way. They were formed in Oakland and took the name of the venue where they performed their first gig. Made up of four master musicians, they sound like an ensemble with twice as many members. Fabrice Martinez brings his knowledge and abilities in traditional Romani music to give the band a breadth and dimension that is hard to match. The rest of the band includes vocalist Ursula Knudson, guitarist Douglas Smolen, and Djordje Stjiepovic on bass.

Their individual journeys reflect much of what inspired them in the music they have pursued both individually and collectively as a band. Farbrice Martinez, a European, may have had a lifestyle that most resembles his musical heritage of the rest of the group. At 18 he traveled across Europe more than a few times by hitchhiking, at first with a violin. But, as his instruments grew larger, such as the violintromba, he changed his mode of transportation. Over a epic seven-year journey through western and eastern Europe he built a mule drawn caravan traveling from France through Italy, Sloveni,a Hungary, and eventually to Romania. It was a journey to the heartland of his music, backtracking the path of the original Romani culture. For a decade he performed with a his group Croque Mule playing with American and Italian musicians throughout Europe. He was the key founder of the Fishtank Ensemble in 2004.

Standing in total contrast to Martinez, Ursula Knudson lived most of her life in Sacramento, California. She is a trained classical vocalist who tried out a variety of musical projects when she finally found her home with the Fishtank Ensemble. Her vocal duties allow her to put to full use her vocal abilities, which find her covering elastic jazz vocals as well as Middle Eastern styles. Her voice runs so high in range, it’s sometimes hard to distinguish between her singing and when she plays the saw, which she learned to play for the band. She also plays violin.

Douglas Smolen is capable on his guitar to cover the considerable gypsy jazz duties while adding to the mix classical variations fused with Flamenco and world music. He is also an accomplished producer and composer. He describes himself as a philosopher, comedian, and writer. He includes in his musical endeavors an innovative hip-hop band, Boom Clique, where he performs as El Douje. His musical adventures range from the staggering blend of world music with Fishtank Ensemble to masterful techno-pop oriented guitar work.

Rounding out on the ensemble is Djordje Stijepovic on bass. He is from Serbia where he studied classical music at a conservatory. He also studied jazz arrangement, based on what comes out from the recordings and performances, Stijepovic is a near athletic bass player who seamlessly moves around a variety of genres, including rockabilly, with the band Atomic Sunset, where he lends his now famous signature slap. He’s also known to provide bass support for Motorhead as well as bluegrass groups. He is, in fact, known as one of the best slap-style double bass players in the world.

As a relatively young band of veteran musicians and the best in their field, they formed in 2004 in Oakland. They have the advantage of being able to work with layer after layer of musical textures from nearly as many cultures as the Romani culture once traveled, which earned them the now-romantic title of gypsy. Today, this is no insult. As each member symbolizes, the gypsy influence has encouraged them all to explore a world of music without borders or boundaries.

Their latest release, 2010’s Woman in Sin finds them taking their music into more accessible directions than in previous releases. Their first album, Super Raoul, stayed focused on the sounds of the Middle East. Woman in Sin opens with the title track that celebrates a more modern approach to their gypsy jazz origins. Ursula Knudson takes her vocals so far into the high end of her vocal range, her performance becomes something of a tightrope walk without a net only to find she spreads her vocals wings and flies. The track is a remarkable opening to their finest album. There is the scat like ’40s jazz with “After You’ve Gone,” which gives Stijepovic the chance to shine on the slap bass. The violin of Martinez speeds along on the track and cumulates into a giant celebration of a hybrid of gypsy jazz and ragtime that will leave the listener breathless. This yields to a cool and economical version of “Fever,” which gives everyone a chance to regroup. “Espanollette” emerges from the jump with a strong dance-around-the-fire gypsy arrangement, featuring a musical saw hovering over the melodic violins and accordion. It’s a stirring and humorously haunting performance.

In performance Fishtank are equal to the task of their studio work. They come to the stage dressed like the musicians of the ’20s and ’30s jazz era. Their performance visually demonstrates their stylistic cohesion as well as their playful sense of humor. They really do become like their gypsy ancestry.

Fishtank Ensemble, born nearly a decade ago, bring together a passionate love for their music with a drive to build on the history of genres of music that have allowed them to travel, not so much like nomads, as much as creating a home within the music they play with such imagination, energy and inspiration. Their music is so alive and vital, to hear their albums and to see them live, is like a shot of much needed energy for all with whom they come in contact. For that reason, the hope for this band is that they will continue to travel, not only around the world, but through ever evolving landscape of music they continue to perfect.

The Milk Carton Kids Return to the Roots of Folk Music