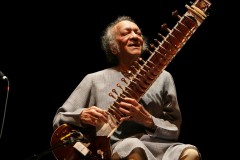 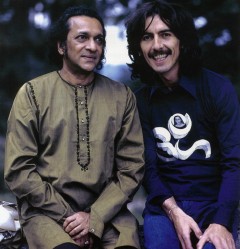 Shankar and George Harrison in the 1970s 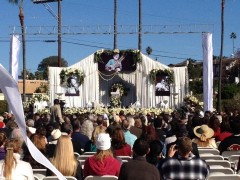 Shankar Memorial at the Self Realization Fellowship in Encinitas

On Tuesday, December 11, 2012 the world lost one of its most profound musical and spiritual teachers with the passing of Pandit Ravi Shankar at the age of 92. In spite of his failing health over the past several years he still managed to perform regularly in public, including a concert four weeks earlier (on 11.04.12) in Long Beach with his daughter Anoushka. This would turn out to be his final public performance.

A long-time resident of Encinitas, a memorial was held on December 20 at Paramahansa Yogananda’s Self-Realization Fellowship, a pillar of spiritual influence in the San Diego community that Shankar embraced during the last three decades of his life. Memorial services for such a renowned figure typically turn into a sensationalist media circus but Shankar’s memorial was as tasteful and profound as the example set forth by his life and music. In a concise one-hour program there were a dozen distinguished guests and family members who spoke lovingly of his deeply spiritual heart and compassionate nature, mirroring the energy that Shankar himself put out into the world. One of his disciples spoke of Shankar’s wit and his playful use of puns, inspiring the wisecrack “that’s why they call me a pundit!”

Born as a Bengali Brahmin on April 7, 1920 in Varanasi, India (his birth name was Robindro Shaunkor Chowdhury but was later changed to the Sanskrit version of Ravindra), Ravi was the youngest of four brothers who was raised by his mother in impoverished conditions and did not meet his absentee father until he was almost eight years old. His eldest brother Uday transplanted the family to Paris in 1930 where for the next decade Ravi was a member of Uday’s troupe where he became a consummate professional as he mastered the classical and folk traditions of Indian dance. Through his travels he rubbed shoulders with some of the most influential people of the time including the likes of Gertrude Stein and Cole Porter.

In 1938 Shankar became the student of his musical guru Ustad Allauddin Khan and studied with him under the same roof for seven years, eventually marrying Khan’s daughter, Annapurna Devi (resulting in one son, Shubho, before divorcing). During the 1940s and ’50s Shankar became a national sensation in his native country and was responsible for synthesizing many elements of music from India’s northern region with aspects drawn from the Carnatic discipline (prominent in the south of India). When filmmaker Satyajit Ray asked Shankar to compose music for his Apu Trilogy (1955-’59) his fame reached global proportions in recognition of India’s unique gifts to the arts.

Those gifts truly are unique and quite emblematic of the cultural and philosophical divide that separates the great spiritual disciplines of the West and East. Much as the 12-tone scale used in most of Western music has an underlying foundation of Christianist thought embedded within it (as filtered through the notion that human beings are borne of “original sin” and require redemption through a spiritual and/or psychological “Christlike” transmutation), Hinduism, by complete contrast, contains no such construct. However, one of the many precepts that unite these two great religions is the notion of the divine Word. In the case of Hinduism the Word is the cosmic sound of “Aum” (or Om) as the combined vibration of the three phases of nature: creation, preservation, and dissolution. When human consciousness is properly aligned with spirit in the Hindu paradigm the sound of “Aum” literally contains the power to make manifest everything in our physical world. And the ragas that Ravi Shankar composed and performed were a living manifestation of this spiritual
principle.

On his seminal 1968 LP The Sounds of India, Shankar provides insight as to how to musically define a raga: “Ragas are precise melody forms. A raga is not a mere scale, nor is it a mode. Each raga has its own ascending and descending movement [containing] those subtle touches and usage of microtones and stresses of particular notes.

“The Western listener will appreciate and enjoy our music more if he listens with an open and relaxed mind without expecting to hear harmony, counterpoint, or other elements prominent in Western music. Neither should our music be thought of as akin to jazz, despite the improvisation and exciting rhythms present in both kinds of music.”

With the tambura, the drone instrument in the background, there is a sense of suspended animation — of not quite being grounded where space and time are in a permanent state of rubato and that can be unsettling to the western mind firmly rooted in a four-on-the-floor aesthetic. When the Beatles were making their second feature-length film Help! in 1965, George Harrison happened upon a sitar on the set and it was through this chance encounter with the exotic instrument that he became curious about Indian culture. Within the next few years Harrison’s personal and spiritual awakening led to a worldwide renaissance of exploring Eastern thought and, more specifically, Indian culture as a whole. Enter Ravi Shankar as his friend, mentor, collaborator, and guru.

As a symbol of how unusual Indian music was to Western ears a mere 40 years ago after spending a minute and a half tuning up and receiving a round of applause for his efforts, Shankar famously told the audience in 1971 at the Concert For Bangladesh “Thank you. If you like our tuning so much, I hope you will enjoy the playing more.”

Harrison once referred to Ravi Shankar as “the Godfather of world music.” Did Harrison have any idea when he wrote one of his most famous songs that the English translation of Ravi is “sun”?

Of the numerous words spoken at Shankar’s memorial some of most heartfelt were by conductor and musical director of the Israel Philharmonic Orchestra Zubin Mehta: “As a musician I’ve always felt like a little crumb in his presence because every night, whichever stage he was performing on, he was composing simultaneously. That is something that doesn’t exist in my world. We just try to recreate what masters have left us for hundreds of years. And working with Ravi in New York, knowing that he could not read or write the Western notations, it was my honor to sit next to him when he was composing his concerto for the New York Philharmonic and take dictation from this great master. These are hours that I will never forget. And the humility with which he approached the great musicians of the New York Philharmonic who were dying to hear him improvise in the sections, that we would sit quiet and he would say now just go on let me hear the orchestra and I would say “no, we want to hear you.” And so it went through all the rehearsals. And we performed this great piece of his in quite a few cities in the world always to such standing ovations for this master that I as a musician have always looked up to from the first recordings I heard of his and he was always positive, always smiling. You know each raga started with such a plaintive, meditative, introspective mood and ends in victory. Until he achieves this victory he takes you through a gamut of emotions — it’s the cosmos opening up. I was once at a recital in Carnegie Hall that didn’t finish till way after one o’clock in the morning because it was only around midnight that he really got into his inspirational high points and not one person in the public left. These were thousands of Americans glued to what guruji took all over the world. When India was an unknown quantity in the world Ravi was opening up our country to everyone. Everybody got to know India all over the world through Ravi.”

In 2001 when George Harrison passed away Shankar had the opportunity a year later to honor his friend with a major composition (“Arpan”) and by speaking at the Concert for George where he told the audience how George “was like a son to him,” a sentiment echoed by Harrison’s widow Olivia at Shankar’s memorial: “I met Ravi in 1974, in fact a few weeks before I met George. Of course his relationship with George is a story that encompasses so many things that went on to inform and change the world we grew up and grew older in. Its music, beliefs — lofty realms of thought, multi-culturalism, and the power of friendship. He guided a young George and helped satiate his desire for a more meaningful life. He did this through Indian classical music, literature, and travel. Ravaji laid the stepping stones from west to east that led George to new concepts, alternative philosophies, and completely transformed his musical sensibilities. Both of them stepped outside their cultures and in the spirit of true adventurers immersed themselves in each other’s customs. They exchanged ideas and maladies, until their minds and hearts, east and west were entwined like a double helix. And I believe that we will carry a molecule of a hybrid gene that today has opened our minds and tuned our ears to different sounds making familiar what once seemed so foreign. They were like father and son as well as brothers. They made each other laugh as if they shared a secret. And I’m sure they did. Their common bond was music and they collaborated many times. Sukanya and Dhanni and Anoushka and Norah and I were rather in awe of their bond. Of course Anoushka studied with her father and George said he felt so sorry for her because she could never escape practice like he did. Then one day many years ago he brought his young daughter Norah over, not telling us she was a musician and just before they were leaving sat down at the piano and began to sing. She never saw Ravi’s face standing behind her beaming as our mouths fell open. Once, Ravi had written a short [song], a devotional A-side if you will. George said “Ravi! You should write more of these.” Raviji said, “George, I’ve been trying NOT to write them for years.” From the terrestrial to the celestial his music will flow on — within you and without you. He will be with us in morning, afternoon and evening ragas.”

Fishtank Ensemble: A Treat for Your Eyes and Ears

John Gorka and the Holiness of the Song