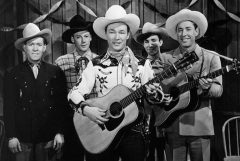 1930’s line up of Sons of the Pioneers with Roy Rogers.

I’ve talked about lots of different kinds of cowboy and western music in these columns before. Living in the West I first became acquainted with the Sons of the Pioneers in Lake City, Washington, when I was about 10 years old. Now, that wasn’t the original Pioneers of the 1930s with Leonard Slye (Roy Rogers); I think the bass player was Shug Fisher but the Farr Brothers (Hugh and Karl) were there and the trio was Bob Nolan, Tim Spencer, and Lloyd Perryman. My Dad took me up to meet them (he’d known Bob Nolan from the early 1930s when they rode freight trains together). In fact, they had met on the Great Northern during a long haul over the Rockies somewhere in Idaho. (Dad and Bob always said that they nearly froze to death together.) That trip up to Washington was the last road gig for both Bob Nolan and Tim Spencer. Within a year they’d both become part-time Pioneers and the next time I saw them the trio, it included Lloyd Perryman, Ken Curtis, and Tommy Doss. That happened in Los Angeles, or rather Compton, at the Town Hall Party, which was the Opry of the West Coast at 400 So. Long Beach Blvd. Dad always said that trip over the Rockies was the inspiration for the Nolan song “One More Ride.” He and Bob talked about that phrase to get them through a long, cold night “and damned if Bob didn’t turn it into a song.”

Les Anderson and Doye O’Dell, who were both part-time Pioneers, and their fishing buddies talked about fishing being the only thing that could keep Bob from writin’ down lyrics. He was a natural poet who never stopped writing. Now, Tim Spencer was a prolific songwriter, too, but he’d agonize over a song and rewrite and rewrite; the other Pioneers were only occasional songwriters. Bob Nolan would mostly write something down once and it’d end up being “Tumbling Tumbleweeds,” “Cool Water,” “The Touch of God’s Hand,” “Lovesong of the Waterfall,” or a novelty song like “When Payday Rolls Around.” Bob couldn’t stand Spencer’s writing style. They only wrote one song together and that one, called “Blue Prairie,” was the gem. My Dad’s favorite Nolan songs were “Down where the Rio Flows” and “The Everlasting Hills of Oklahoma,” although we had just about every recording they ever made and saw them live more times than I can tell.

Sometimes you weren’t sure which Pioneers you were going to get, particularly in the 1940s and early ’50s. While one group was out on the road doing rodeo dates (particularly when Roy Rogers and Gene Autry ran their own rodeos) and another gig would come up on the West Coast, that’s when the part-time Pioneers came into play. Just about everyone in West Coast country music worked as a Pioneer from time to time. Members of Pioneers imitator groups like Foy Willing and the Riders of the Purple Sage, Andy Parker and the Plainsmen, and the Cass County Boys did occasional work as a Pioneer. Lots of well known solo performers would sometimes sit in on a gig, just to say they had. Gene Autry once did a show with the Pioneers and nobody noticed; he was just one of the band. Other part-time Pioneers included Johnny Bond, Tex Williams, Smokey Rogers, Eddie Dean, Doye O’Dell, and Jimmy Wakely. Sometimes, when Karl Farr was out of town, the guitar would be Joe Maphis, and once or twice jazzman Barney Kessel played with the group. Brother Hugh’s fiddle was often replaced by Tex Atchison, Arthur Smith, and Charlie Lindville as well as El Cajon’s own Cactus Soldi. Long after their terms as full-time members founders Bob Nolan and Tim Spencer would return for local L.A. dates even as late as the mid-1970s. Bob made a solo LP in the late ’70s featuring some new songs and some old ones (he never stopped writing). He died in June of 1980. Rex Allen once told me that Bob was still composing lyrics in his mind on his death bed. 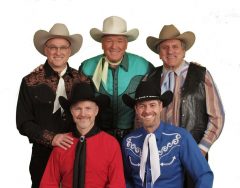 Sons of the Pioneers current line up.

I’ve sung so many of these songs in my mind for so many years. This year at the Roots Festival and at the Sam Hinton festival I was asked to get up on stage and sing Bob Nolan’s words with Trails & Rails (in trio with Walt Richards and Paula Strong). I never got to be a part-time Pioneer but now I’m a part-time Trails & Rails. To sing those old western songs the way I’ve listened to them for well over 60 years is a real treat. Thanks, Walt and Paula. I know somewhere my Dad has a smile on his face.

GRAMMY UPDATE!
Well, it looks like if we’re lucky with this first grant, we’ll be getting through the first nine San Diego Folk Festivals and concerts up to about 1975. Now we’ve got to start casting around for more grant money to continue the project. There are some 20 San Diego Folk Festivals, which include artists like Olabelle Reed, Lily Mae Ledford, the Golden Eagles, New Orleans Indians, Fro Brigham’s Preservation Band, Kyle Creed, Hank Penny’s Radio Cowboys, the Strange Creek Singers, Hally Wood, the Red Clay Ramblers, Ramblin’ Jack Elliott, Napoleon Strickland Fife and Drum Band, Sweet Honey in the Rock, Frankie Armstrong, Silly Wizard, the Hoosier Hot Shots, the Balfa Brothers, Louis Broudroult, Doye O’Dell, Johnny Bond, the England Brothers, Red River Dave McEnery, and a whole lot more. We also have tapes of 15 or so Adams Avenue Roots Festivals, which were sort of the return of the San Diego Folk Festival as well as the Adams Ave Street Fair, which include videos of Howard Armstrong and Nat Reese, Judy Henske, Clyde Davenport, John Jackson, Rose Maddox, Hank Thompson, Big Jay McNeeley, Billy Boy Arnold, the King Brothers, Louisiana Red, Glenn Ohrlin, Peggy Seeger, J.J. Jackson, Santiago Jimenez, Frank Proffit Jr., D.L. Menard, Kenny Hall, J.C. Labbie, Fred Gerlach, Joe Houston, Buddy Blue, and again so many others it would take pages to list them. Along with all the tapes I’ve amassed over the years, when news got out that I had gotten the first grant, several people who had taped things at my events that I just didn’t have the resources to capture, volunteered their own tapes. Just going through the tapes of my late friend Ted Theodore is bringing to light a host of wonderful things that I missed. We have to finish this project. We can’t afford to leave it half way. I guess that’s it this time around. See you on KSDS (88.3 FM Sunday Nights at 8pm) or at Folk Arts Rare Records (9am to 5pm daily at 2881 Adams Avenue) and remember as Gene Autry always said, “You just can’t be mean and sing a good song at the same time.” (See, that’s what’s wrong with George Bush. No one ever taught him any good songs.)

This article was first printed in the July 2008 issue of the San Diego Troubadour.

Getting Hired at the Really Big Show

How I Got My Start