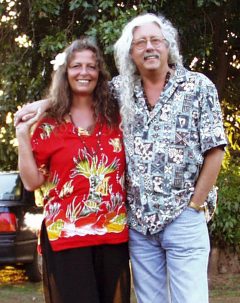 Arlo and Jackie Guthrie, shortly before her death from ovarian cancer in 2012. 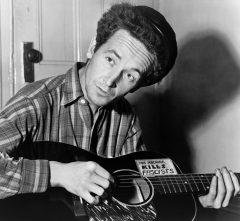 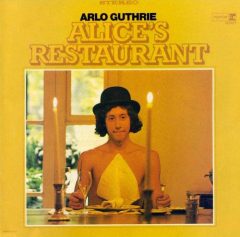 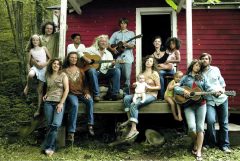 As Arlo, Sarah Lee, and Abe Guthrie return to the Belly Up with the Re: Generation Tour this month, I take a journey through my personal past and the impressions the family has left with me.

Let’s let our hair down. It’s time to break the fourth wall. This story is admittedly a bit indulgent on my part. However, it’s not about me. I want to tell you a story of folksinger Arlo Guthrie and his family because it illustrates how music and its makers weave their way through our lives.

This story goes back decades. It is a tapestry with a back story, sub-references and tall-tales. So, if you picked up this article that the publisher and editor of San Diego Troubadour (Thanks, Liz!) has graciously allowed to go to print, find an easy chair, grab your self a joint, a beer, or a glass of wine, and join me for this parade of memories from this extraordinarily scatter-brained writer.

Now, let’s return to yesteryear. It’s 1969, nearly 50 years ago. I’m 14. I’m outside the L.A. Forum on August 15th after the Clapton-Winwood super group, Blind Faith’s concert. I’m waiting for my parents to pick me up. I see Eric Burdon, formerly lead singer of the Animals, standing and talking to strangers about his upcoming book and his new band, War. I strike up a conversation with him. He asks me if I can give him a ride to Hollywood. “Uh, I don’t think my mom would want to,” I sheepishly answer. He glares at me and moves away.

As the conversation ends I see the parking lot is filled with golden flyers on every car. Many are scattered like trash on the ground. I pick one up and there I see an ad for a new movie, Alice’s Restaurant, starring Arlo Guthrie, to be released on August 20th. I take my first look at Arlo sitting in front of that famous Thanksgiving dinner that couldn’t be beat. He looks like a crazy smiling hippie. As I’ll soon come to find, that’s pretty much who he is.

Alice’s Restaurant goes on to become a hit film and a cult favorite in the mold of Easy Rider. I catch up with the album and find it was released in 1967. Later, he shows up on PBS in a full concert with Joni Mitchell. I am converted to this new kind of folk music. I am forever changed by Arlo’s humorous stories and songs.

A few weeks later in ’69, thanks to Bob Dylan, I discover Woody Guthrie. At first, I don’t make the connection between Arlo and Woody. As far as I’m concerned Woody was Dylan’s father. I venture over to my favorite book store in Hermosa Beach–the Haight-Ashbury of the South Bay–and buy the book Bound for Glory, Woody Guthrie’s autobiography, which was published in 1943. This leads to a trip to my favorite record store (remember them?) where I buy a three-LP box set of the Library of Congress interviews between Alan Lomax and Woody from 1940. I’m entranced and forever changed by the words, music, and voice of Woody Guthrie. I play the record loud and his voice booms through our beach bungalow.

Finally, after I read the liner notes on the album Alice’s Restaurant, my friends and I persuade one of our parents to take us to the R-rated movie of the same name.

During the summer of 1970, I write to the Committee to Combat Huntington’s Chorea and ask for more information on Woody and the disease that took his life. I receive a two-page typewritten letter from Woody’s former wife and Arlo’s mother, Marjorie Guthrie, along with a wealth of information. It is an act of grace and a personal touch from someone so close to Woody and Arlo.

Later, near the end of summer, I attend the Hollywood Bowl Tribute for Woody Guthrie. After three years of attending the best in hard rock shows, this is quite a departure. Peter Fonda and Will Geer read Woody’s words, and Arlo, Joan Baez, Country Joe McDonald, Odetta, Ry Cooder, Richie Havens, and Pete Seeger sing his songs. It is a warm summer night and I am alone. The music reminds me of the legacy of the nearly forgotten folksinger. I imagine Woody smiling and drifting above as he drifts toward the stars. Bound for Glory and Born to Win. As the concert comes to an end, Marjorie Guthrie stands off to the side of the stage waving and smiling.

The years roll by and Arlo keeps showing up on TV, in concert and on record. For the next 20 years I collect his albums and see his shows.

Then, online services happen. Enter computer modem-based communications technology. In 1993, a few loyal fans create a bulletin board and forum for Arlo on a service called Prodigy. Then, after a few weeks, Arlo shows up at the forum. His wife, Jackie, follows. We all begin exchanging messages.

Then, in November 1993, Thanksgiving weekend, I find myself front and center at the Pete Seeger and Arlo Guthrie show at Carnegie Hall. Invited by Jackie Guthrie, I couldn’t refuse. When I arrive at the famous venue I introduce myself to Jackie. Her eyes light up and she gives me a hug and encourages me to keep writing. Later, she invites me backstage to meet Pete, Arlo, and family.

Backstage at Carnegie Hall is more of a reception place where fans, friends, and family are gathered. Pete is at one side of the room talking with people. Then, Arlo steps out of the elevator. “Oh No!” He cries out. “What are all these people doing here?! I hate people.” Then, he proceeds to ‘hate’ people in his own special way as he patiently signs autographs and poses for photos with fans.

One of the questions I ask him is if he’ll be appearing at the Woodstock 25th Anniversary festival. He replies, “I’ll go anywhere that’s free.” He continues, “I was called by the promotors and they asked me to make an appearance. I told them if it’s free, I’ll go. I never heard back from them. That makes it real. You know, like Coca-Cola; they could call it the real thing,” he laughs.

In August 1994, Arlo did appear at a free Woodstock concert at the Bethel, New York site of the original festival. It was an unadvertised, bootlegged show. The official show was held an hour’s drive from Bethel. Later, a friend sent me a video and photos of Arlo playing as the night rain fell.

Two years later, in December 1995, I decide it is important that Arlo play at my favorite venue, McCabe’s Guitar Shop in Santa Monica. So, through work with McCabe’s and Arlo’s management–all I did was give out contacts and phone numbers–the folksinger appears at the famous venue for three nights on January 25th, 26th, and 27th. It is a taste of bliss after seeing Arlo and his son, Abe, in larger venues. After the show, Arlo’s driver Dennis and I go to the bus to play Star Wars video games on Arlo’s computer. On our way out, we walk past the great Beat-poet, Allen Ginsberg, who dropped by to pay his respects.

As Dennis and I are having our fun, Abe comes running in rummaging through a pile of books. “What’s up?” Dennis asks. “Allen wants a copy of Arlo’s book,” Abe says frantically The book is for children, titled Mooses Come Walking,” with illustrations by Alice Brock, former owner of that famous fictional restaurant. Here we are witnessing one of the great poets of the 20th century asking for a book of Arlo’s simple poem for children. It occurs to me, this may be a moment of irony.

More years roll by and, in 2010, I’m writing about music on a regular basis. I pick up an assignment with Sing-Out! to write an article about Sarah Lee Guthrie. She has become a singer-songwriter in her own right. This happens when the Guthrie Family are coming to L.A to play UCLA’s Royce Hall. I’m given backstage access. The first person I see is Jackie Guthrie and even though it’s been years since we’ve spoken, she waves her hand for me to come over. A friendship is renewed as though not a day has gone by since the 1996 McCabe’s show. She uses my shoulder to lean on as she has had a skiing accident injuring her ankle. The show is wonderful with generations of the Guthrie family performing that night. But it is Jackie’s kindness that remains in my memory.

In 2011, courtesy of Barry McGuire–an old friend of Jackie and Arlo’s–is looking for bookings in New England. As I did at McCabe’s, I hand out contacts and phone numbers. McGuire and former Byrds member John York are booked at the Guthrie Center in Great Barrington, Massachusetts. It is the church of Alice’s Restaurant fame. It has been converted into a concert venue and charitable community center. The generosity of Barry and Mari McGuire allows me to go to the show. It is a quick turnaround trip that has me traveling from “California to the New York Island.” The church feels strangely familiar. The movie was filmed there.

Unfortunately, Arlo and Jackie are on the road that night. As the concert is in progress, Jackie calls the Center. Soon afterward, I feel a tap on my shoulder and the office manager whispers in my ear, “Jackie said to tell you she loves you.” Moved beyond words, I look forward to a future visit with Jackie and Arlo. But it was not to be. I have no idea how little time remains.

So, in October 2012, Jackie Guthrie quietly passed from this life after a battle with cancer. It was a shock. When I saw her in 2010, she was full of kindness, generosity, and good humor. With Arlo’s approval, I wrote a tribute to her that was published in No Depression. Arlo sent his thanks.

Since I first discovered him, Woody Guthrie has reached iconic heights as one of America’s finest balladeers and songwriters. Today his songs are considered a national treasure. He even has a festival named after him in his home town of Okemah, Oklahoma.

Arlo Guthrie’s legacy continues to grow. He tours worldwide, playing to capacity audiences. From the first time I saw him on that golden flyer in 1969 to the last time in Bakersfield, California, he has brought laughter and tears through his stories and songs. His family has gifted me with the opportunity to connect with them through the written word. It’s not anything I could have dreamed up.

But, more than anything, it seems that Jackie Guthrie still presides over the clan she nurtured and grew. And she, no doubt, has a little help from Woody and Marjorie Guthrie, as they soar across the heavens and live in the hearts of all who knew them. 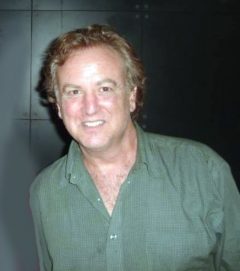 Terry Roland was born in West Texas and raised in the South Bay of Southern California. HIs writing reflects his love for the music of the heartland places. Watch for the connection between dusty wind-blown tumbleweed and the warmth of summer sun and sandy beaches.