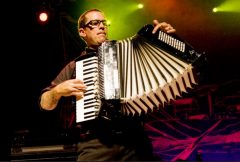 Give the credit to the band Those Darn Accordions. It was a late-1990s concert by that eclectic Bay Area squeezebox combo that drew North County resident and budding accordionist Matt Hensley to Los Angeles one fateful night. After the show, he and his LA-based buddy went to grab a pint at Molly Malone’s, an Irish pub nearby.

“When I went to the restroom, he was talking to Dave [King], who had just broken up the Dave King Band, and somehow they got around to I played accordion. When I came out of the lavatory, Dave came up to me, tapped me, and shook his head. I asked my friend what that was about, and he said, ‘That’s Dave, he’s looking for an accordion player, and I guess he doesn’t think you look like one!’”

Hensley said he and King–who had fronted the popular 1980s hard rock band Fastway–got to chatting. “He gave me a cassette and invited me to rehearsal in 10 days. I listened to the cassette in the car, learned some tunes, came up, and went to my first rehearsal. I’d just met these people for the very first time in my life, and I didn’t have any vibe if I was in or not. I asked Dave, ‘What did you think?’ and he said, ‘Oh, you’re in.’”

And, thus, was born Flogging Molly–who play March 14 at The Observatory in North Park.

But staying with his wife and newborn son in San Diego County while being in the LA-based Flogging Molly presented some challenges.

“I lived the undercover life of a truck driver: I would go up to Hollywood three or four times a week. I promised my wife that she’d wake up next to me every morning. I got proficient at eating with one hand on my drives home!”
Reached by phone on Valentine’s Day, Hensley was with Flogging Molly on the way to a show in Padova, Italy. Call it their “Frozen Mediterranean Tour.”

“I’m sitting in my tour bus staring out the window at Italy right now,” he said by cell phone. “There’s snow on the ground.”

Hensley, who grew up in Vista and has lived in Carlsbad for many years, pointed out that when the band’s current tour started in January, it was 87 degrees as he left home.

Still, travel has its perks, and for an accordion player, hearing the instrument in many different settings is one of them.

“As strange as it is, [the accordion] truly is one of the instruments that I believe to be the backbone tone and sound to people’s ethnic music. You can go anywhere in the world, but nothing sounds like conjunto music in San Antonio. And you can go to Louisiana and listen to Cajun music, and there’s nothing like it anywhere in the world.

“An accordion can sound like you’re in a subway in Paris, a pub in Ireland, or anywhere in the world. It has that kind of sentimental feeling to me.

“Originally, in its first forms it was just 10 keys. With that little instrument, it was still really loud. The first ones had four reeds per note. You could play in an outdoor setting before electricity, and everybody could hear it! That was one of the key factors. It was light and small enough for sailors to put it in their bunks and take it around the world. Guitars and different instruments did the same thing, but 200 years ago not too many sailors were rolling around with a guitar or trombone.”

As for his professional affinity for Celtic sounds (Flogging Molly is generally classified as an Irish punk band, and lead singer King hails from Dublin originally), Hensley credits Ned Giblin, founder and owner of Tom Giblin’s Pub in Carlsbad Village (since sold and rebranded as O’Sullivan’s): “We’d play until the sun came up!”

Hensley said his first instrument was trumpet, while attending Lincoln Middle School in Vista (now Vista Magnet Middle School). A self-admitted preference for skateboarding over homework led to his father placing him at Army and Navy Academy in Carlsbad for high school. And while the military school had a band, he did not participate in it.

But he did pick up guitar on his own time, taking lessons at a now-defunct music store on South Santa Fe. After graduating high school, he briefly relocated to Chicago–and while he returned home in short order, it waswhile living in the Midwest that he became interested in learning to play the accordion. Back home in Vista, he bought his first accordion from the same music shop where he’d earlier taken guitar lessons.

That first purchase ignited a passion in him: he is able to play a variety of accordions, from piano-key and button-style to the smaller concertina.

As of right now, I probably own 13 squeezeboxes. I just kind of had a situation a month ago where I traded six in order to get another. When I had a pub in Oceanside, I had 30 on the wall. When I sold the pub, they all came back home. I had a problem!

“I have accordions that mean a lot to me or are beautiful works of art.”

While his job is playing accordion in a band that incorporates huge swaths of Celtic traditions and structures, Hensley said growing up he loved listening to Mexican radio.

“I love TejaÃ±o and Tex-Mex and Mexican-inspired music, and [I love]playing that and incorporating some of those south-of-the-border sounds into the accordion, even in Flogging Molly. Listening to Flogging Molly, you might pick up a Flaco Jimenez tell!”

Hensley said having Latino strains in the music helps Flogging Molly push back against the stylistic limitations inherent to being a band with the “Celtic” label so firmly attached.

“I kind of feel that there are times it feels pigeonholed. It’s a very Lucky Charms kind of thing sometimes. That’s the hole we’re in,” he said, comparing it to being in a blues band or a country band: Whatever style you play in brings certain expectations from fans.

“We combat that by walking on stage and killing it with what we do… When we walk on that stage, we’re trying to be the best band we can–not the best Irish band.”
While the “Celtic punk” label can provoke stereotypes in much of the world, in Ireland and Scotland it resulted in incredulity: “What are one Irishman and a ton of Americans doing coming here and playing our stuff?” Hensley recalled as the reaction to their initial tours over there.

“Once we went over to Ireland and paid our dues there, earning our way, what we do as a band is more potent that what it’s labeled as. The band is a powerful thing and it lives on its own. It’s more than it’s just an Irish thing.”
While Hensley was looking forward to an authentic Italian dinner that night, followed by stops in Paris, Amsterdam, and Munich, he was already looking forward to coming back home to San Diego.

“The more I travel, the more it makes me appreciate where I live. I love seeing the world, but there’s something very magical about coming home to San Diego.

“And damn if we don’t make the best carne asada in the world!”

My Life and Times with Arlo Guthrie and Family