January 2023
Vol. 22, No. 4
Lawrence Welk: Revisiting the Counter-Counter Culture by Charlie RecksieckFebruary 2015
San Diego Is (Almost) Famous Again: Cameron Crowe Brings his Movie to the Old Globe Stage by Raul SandelinFebruary 2015
The End of the Line for Mad, the Magazine That Was Satirical, Silly, and Serious by Paul HomiczFebruary 2015
THE HOSPICE BUBBLE and Other Devastating Affirmations: Poems by Lizzie Wann by Ted BurkeFebruary 2015
You’ll Get Pie in the Sky When You Die by Yale StromFebruary 2015
LENNY BRUCE: Word Blower Supremo (and the brother that you never had) by Jon KanisFebruary 2015
Art on 30th: Creating and Marketing Art You want to Live With by Lorraine IversonFebruary 2015
To Candye–Love, Sue by Sue PalmerFebruary 2015
Nicki Carano: A Tragic End for a Beloved Friend by Liz AbbottFebruary 2015
Movies About Musicians: Real and Imagined by Ted BurkeFebruary 2015
Advertisements 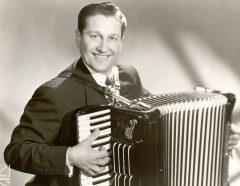 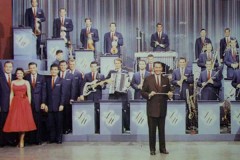 No one seems to remember Lawrence Welk and his somewhat schmaltzy 30-year run on television correctly. He’s known as a musical punch line, a cheap impression for Robin Williams, Saturday Night Live, and Fred Armisen, or probably not remembered at all by people with good taste and/or anybody under the age of 40.

Lawrence Welk was, quite simply, the counter-counter-culture. If you don’t believe me, take a second and Google or YouTube “Lawrence Welk hippie.”

That being said, I love The Lawrence Welk Show.

Yes, it’s square. Corny musical numbers carried out on cheap sets, with a family of singers of varying quality, accordion music, and cutaway shots of impossibly old people dancing. But the Welk show was (and is) a testament of days long gone that actually co-existed during changing times. The program ran from 1955 to 1982, first on ABC, then in syndication. It took America from the pre-astronaut age right through the Civil Rights Era, the sexual revolution, and past the Iranian hostage crisis. Lawrence Welk didn’t just manage to exist in the culture despite the changes in society, it was probably a necessary response to what was going on.

In case you’ve never seen it, The Lawrence Welk Show was a lighthearted musical revue performed by a recurring collection of singers, musicians, and dancers. All hosted by an old accordion player with an accent — despite the fact that Lawrence Welk was born in the United States! He was born in a German enclave in North Dakota in 1903 and never did lose either his love of pleasant sounding music or his accent until his death in 1992. The target demographic was clearly somewhere between “old” and “dead,” as evidenced by the constant sponsorship from the good people at Geritol.

For an older generation was wondering where the world had gone wrong in the ’60s and ’70s, The Lawrence Welk Show was an oasis of “wholesome” “old-time music.” For many of those key years, the show was taped in Santa Monica next door to the Santa Monica Civic Auditorium. So on a night when Ken Delo might do “Gimme That Old Time Religion” or the Aldrege Sisters would warble their way through “Shenandoah” on the Welk show, about 150 yards away Elton John or Jimi Hendrix could have been changing music and society, while the Welk musical family would keep blissfully entertaining Nixon’s “silent majority.”

For most people I know, Lawrence Welk was the show your grandparents would insist on watching on Saturday night when they came to visit. At least it was in my house. And even at six years old I knew to cringe when my grandmother would praise Arthur Duncan, the Welk show tap dancer, for his “natural sense of rhythm.” But I had some additional family history with the show. Shortly after my Mom and Dad had met, working in 1950s Los Angeles, my mother, who was little more than a production assistant at the local NBC affiliate, got a job offer to be an associate producer on a new weekly musical revue show. My dad (with my family’s trademark prescience with also pulling out of investing in the Price Club / Costco at the last minute) famously told her, “Don’t take it, it won’t last three weeks.” Of course, that was The Lawrence Welk Show, one of the longest-running programs in television history.

The concept of the show was/is simple: a regular stable of musicians and singers come back week after week performing standards, some newer songs, and often with themes like “Spring” or “Henry Mancini” and fun sets to dance in. Yes, there have been talent shows like American Idol since, dance programs like American Bandstand, Soul Train, Dance Party USA., and variety shows, but Welk was all music, no comedy bits. Actually, the comedy was usually unintentional.

Yes, let’s make no mistake. The Lawrence Welk Show is absolutely ridiculous. And I’m ridiculous for having watched so much of it, but I’m completely captivated by it. I’ve got deep, personal opinions about everybody on the show. These are all things that I would and have said watching different Welk performers popping up on the show literally within two seconds: “Myron thinks he’s so hot just ’cause he’s second in command to Lawrence!” “Guy didn’t deserve to marry Ralna,” “Why don’t Jimmy Roberts and the Champagne Lady just go get married… on an ice floe!” “You just gotta have the feeling that George Cates must smell like a dumpster.” And I may never have laughed as much at something on television as when Myron told us that their tall drink of water — singer Tom Netherton — “is still single, ladies!” or when Jack Imel couldn’t keep up with the kick line and unsuccessfully chased the chorus girls around the stage for half a song.

Have you ever made fun of something so much that you end up losing track of the “ironic” part of getting into something ironically and all of a sudden that’s just the thing you like? It happened to me with William Shatner’s singing and has happened to modern hipsters with bowling shirts, beards, and Mumford & Sons or Iron & Wine. It fully happened to me with Lawrence Welk. I can’t get enough, and I unabashedly love it.

But I don’t want to give the impression that there was no talent on the show. There was. It was old school entertainment in the old school Judy Garland – Mickey Rooney “let’s put on a show!” tradition.

It wasn’t all silliness. The supporting band was first rate (despite my dad’s inevitable grumbling that world-class jazz musicians were forced to play such “square” music). Arthur Duncan was a great tap dancer in his day (and a lost art). I love the Irish tenor of Joe Feeney. I have a little bit of a thing for “spicy little seÃ±orita” Anacani. Larry Hooper’s bass voice is legitimately amazing. I’m always jealous of Jo Ann Castle’s frenzied piano playing; I swear you can see fingernail shavings flying up when she’s playing. Myron Floren, Lawrence’s aide-de-camp, is quite possibly the best accordion player who ever lived. Seriously. And I defy you to take your eyes off Bobby Burgess no matter who his female dance partner was at the time. (His favorite partner was Cissy, of course.)

When it comes to laughs, often it’s not just the on-air talent that you should watch. Despite it being a taped show, you can count on one major gaffe in the studio, like a light stand falling over during Lawrence’s song introduction… and they would refuse to do another take. The band and singers would wear matching outfits, usually in colors that do not exist in nature, or have never been seen since. The sets are unbelievable corny and cheap. I can only imaging somebody in the ’60s counter-culture on LSD accidentally turning on the Welk program and witnessing the craziness of its counter-counter-culture. It would undoubtedly just be too much to handle; or even after a couple of cocktails.

So, it’s a delicious stew that PBS repeats every Saturday. This article could easily be a 10,000-word examination and evaluation of why I love certain performers and love to loathe others in the Welk “musical family.” And yes it trips me out that the “Welk family” and “Manson family” existed in the same city at the same time. But instead of taking my word for it, I urge you to start watching it and see who your favorites are. If nothing else, it’s shocking to watch now just to see old people in your television set.

I genuinely have affection for the Welk Show. The irony of watching it is all gone for me. I truly enjoy watching these people. I have two theories why, the first being that we don’t see people just singing music on TV straight up. Yes, there are production numbers, but no pyrotechnics or sweeping dolly camera shots, just old people walking across a soundstage vaguely in rhythm while they sing speculations about how much that doggy in the window costs. Watch it for 10 minutes and you’ll sure as hell know there wasn’t any auto-tune back then. It’s not a cheesy game show like American Idol, they already had the gig and were going to do their best to entertain us with standard songs. I’m sorry but you can’t go wrong with a show, singing Gershwin, Hank Williams Sr., Burt Bacharach, and Cole Porter.

But, my other theory is that it’s like a visit to my grandparents. It’s a visit to a time long since passed — and, frankly, it’s more likely a visit to a imaginary time that never quite existed in the first place. Yes they couldn’t have been cornier if they tried, which is incorrect to say because they did try to be corny. And they succeeded. Maybe now that I’m not a kid anymore or can’t even still call myself “young,” I think I just like how aggressively square a world they constructed on that soundstage could be. I’m definitely feeling old and cranky these days as everything today seems meaner, crasser, and way more obnoxious than it did when my grandparents brought The Lawrence Welk Show into my world. (Note: I know the world isn’t meaner than it used to be, that’s just how aging works.) When I watch Welk now it’s 40% laughing at something absurd, but I think 60% of me just wants to feel good watching some old friends sing who may or may not have been desperately trying to pretend that everything is gonna be okay. You can’t get a feel-good dopamine rush that mellow anywhere, I guarantee it.

Charlie Recksieck is a San Diego songwriter, musician, and member of The Bigfellas; some soundtrack work;Â  the upcoming band Leaders in the Clubhouse. Twitter: @thebigfellas

The La Jolla Playhouse: Safe Harbor for the Unsafe

Gimme a Head with Hair! The Beatles, Ed Sullivan, and 50 Years of Music and Hair