December 2022
Vol. 22, No. 3
Nicki Carano: A Tragic End for a Beloved Friend by Liz AbbottMarch, 2016
San Diego Is (Almost) Famous Again: Cameron Crowe Brings his Movie to the Old Globe Stage by Raul SandelinMarch, 2016
The End of the Line for Mad, the Magazine That Was Satirical, Silly, and Serious by Paul HomiczMarch, 2016
THE HOSPICE BUBBLE and Other Devastating Affirmations: Poems by Lizzie Wann by Ted BurkeMarch, 2016
You’ll Get Pie in the Sky When You Die by Yale StromMarch, 2016
LENNY BRUCE: Word Blower Supremo (and the brother that you never had) by Jon KanisMarch, 2016
Art on 30th: Creating and Marketing Art You want to Live With by Lorraine IversonMarch, 2016
To Candye–Love, Sue by Sue PalmerMarch, 2016
Movies About Musicians: Real and Imagined by Ted BurkeMarch, 2016
The Spirit of the Holidays by Liz AbbottMarch, 2016
Advertisements 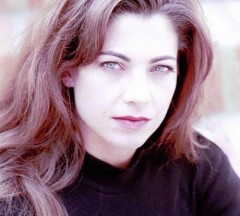 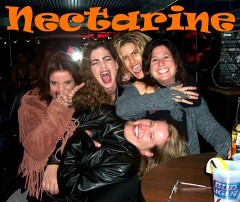 Nicki (second from left), with her all-girl band, Nectarine 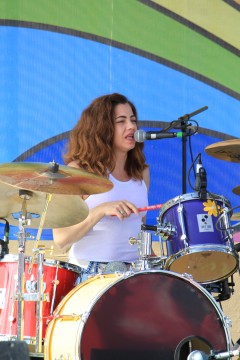 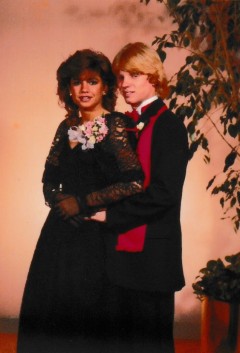 Nicki and Christopher Dale at the senior prom 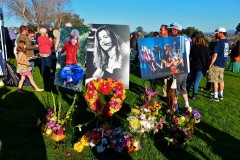 Celebrating the life of Nicki Carano. Photo by Barbara Wise.

Inconceivable, shocking, unimaginable, tragic. These were the sentiments running through the music community when news hit that Nicki Carano had been crushed by a falling tree during the rainy, stormy weather at the end of January.

Nicki was driving on Ingraham Street in Pacific Beach, on her way to a gig in Ocean Beach, when the winds from a strong el NiÃ±o storm toppled a large pine tree. The tree hit several other cars; the 48-year-old drummer was the only
fatality.

A graduate of Clairemont High School, Nicki taught at the San Diego Academy of the Performing Arts and Nightingale Music School. The musician also performed as an actor and dancer. Her talents took her on tours of Iraq, Kosovo, and the Persian Gulf, performing for military shows. She performed with dozens of musicians and bands, including the Romantics, the all-girl band Nectarine, Dramarama, and Doc Severinsen.

Her brother, Joey Carano, is a long-time and highly regarded jazz guitarist, and brother David Carano is also a musician.

A Celebration of Life honoring Nicki was held on February 6th at Kate Sessions Park, with 200-plus individuals in attendance. I was there to pay my respects. There were tears, laughter, hugs, and disbelief that she was really gone. I didn’t know Nicki personally but there were so many amazing stories that her family had to share, it beautifully characterized what kind of person she was: goofy, fun-loving, a beautiful heart and spirit, devoted to her family, talented in so many different areas, loyal, and full of life, beloved by everyone whom she knew. I wish I had gotten to know her.

Another memorial is being planned, date TBD, which will be a musical event and a chance for her fellow musicians to share their “Nicki” stories.

Local musician Christopher Dale had been friends with Nicki since junior high school and had this to share:

It was music that connected Nicki and I, not once, but twice in a lifetime.

I met Nicki Carano and her brother Joey at Marston Junior High and later attended Clairemont High with Nicki.She knew what she wanted to do. You could see the transformation in high school. She’d pull up in that white Camaro, looking like a Rock Star and, by god, she became one. But not your typical Rock Star, though–the kind of Rock Star that Rock Stars should inspire to be. Yes, explosive, engaging, and mesmerizing on stage, yet compassionate, caring, incredibly unselfish, always helping others, and genuine at all times! She was in a class all by herself. That was Nicki. So sweet and unassuming.

Blasting car stereos in the school parking lot. Back yard band parties. Waiting in line to buy tickets to Iron Maiden, Judas Priest, Ozzy, and many others, was as fulfilling as the concerts themselves, because we were all hanging out overnight, working together to get closest to the front of the line in order to get the best seats. Then we’d gather again and celebrate our efforts on the day of the big show. I got be her senior prom date as an underclassman. Being around Nicki made you feel cool. The fact that we lost touch a year or so later is as much of an unanswered question as is the reason why it had to be Nicki who left us so soon. She went on to Mesa College. I still had another year at Clairemont High. Things change. You lose touch.

Nevertheless, it all seemed to make sense when we reconnected a few years ago, after running into her brother Joey, and subsequently attending a gig he and Nicki were doing together. We caught up, we bonded again through our passion for music, and it felt like we had come full circle. As a band, we both returned to Clairemont High for the first time since we graduated and performed for the students. As a direct result of that Nicki ended up donating a drum kit to a young female music student, who approached her after our set, expressing ambitions of wanting to be just like her someday. That was Nicki. Rock Star.
She was the perfect complement to everything I ever wanted to accomplish in music and so much more. Unbelievably talented and a true pleasure to work with, there was no ego that I could see. She was beautiful inside and out. She had a gift and loved making people smile and see them happy, friend or stranger. A dream come true. After all the years I had been playing music, it had suddenly become easier than ever to coordinate and execute music as a unit as long time bandmate Matt Silvia would agree. Team Player. Chemistry. Another level. Harmony. I had never experienced that kind of comfort and peace playing with a band before. That was Nicki. Rock Star.

As accomplished as she was, she was still always open to and happy to take direction, which mostly came from Matt, who at times would even feed her additional backing vocal parts, on the spot, right in the middle of performing a song at a gig. I don’t know anybody else who’d be open to that, including me. But Nicki was and she’d nail it. Rock Star. I took it for granted that we’d continue to perform and create music together as we grew old and gray.

I’ll miss the inquisitive look on people’s faces, as they watched her set up her drums and how quickly it changed to amazement halfway through the first song. This happened at EVERY gig and I loved how it made me smile and feel. She didn’t want the spotlight but what she did naturally, intuitively, and tastefully made her the brightest one on the entire stage and that made me so happy and grateful to be up there with her. I’ll miss how she’d calm me down when I’d get frustrated after we’d have a kick-ass, three-hour gig in Ramona and only end up with $7 in the tip jar. My bandmates deserve better than that! I’ll miss carpooling together as we shared each other’s thoughts. She was an incredible listener and always knew what to say or what not to say in order to comfort you when you we’re having a tough time. I’ll miss teasing her about going home and eating a whole pint of ice cream after gigs. I’ll miss talking about music and have a tune come to mind and she’d say, “I love that song!”

Outside of music, she had me doing yoga. We’d occasionally meet up for breakfast in Clairemont Square to catch up with our high school friend Mary, whose family has owned the place all these years. I love how Nicki would cook for her family on Sundays. How much she cared about them and loved being an auntie. How much she loved helping others. She was a gift to so many. Unforgettable. Irreplaceable.

My heart aches along with the countless friends she left behind–the Carano Family, her boyfriend, Lonnie. Each of us will have to find a way to deal with this tragic loss for the rest of our lives. Nicki will continue to be a source of inspiration, motivation, and dedication as I continue the journey. People who never had the pleasure will get to know her through all of us, because we’ll never stop talking about her and sharing the memories. She will continue to help others through our efforts to preserve her legacy. To me, she is the greatest Rock Star of all time. She’s at the top of my list of people I’ve ever had the pleasure to know.

Thank you, Nicki, for showing me how it’s done. I love and miss you.

Movies About Musicians: Real and Imagined