December 2022
Vol. 22, No. 3
To Candye–Love, Sue by Sue PalmerJune, 2016
San Diego Is (Almost) Famous Again: Cameron Crowe Brings his Movie to the Old Globe Stage by Raul SandelinJune, 2016
The End of the Line for Mad, the Magazine That Was Satirical, Silly, and Serious by Paul HomiczJune, 2016
THE HOSPICE BUBBLE and Other Devastating Affirmations: Poems by Lizzie Wann by Ted BurkeJune, 2016
You’ll Get Pie in the Sky When You Die by Yale StromJune, 2016
LENNY BRUCE: Word Blower Supremo (and the brother that you never had) by Jon KanisJune, 2016
Art on 30th: Creating and Marketing Art You want to Live With by Lorraine IversonJune, 2016
Nicki Carano: A Tragic End for a Beloved Friend by Liz AbbottJune, 2016
Movies About Musicians: Real and Imagined by Ted BurkeJune, 2016
The Spirit of the Holidays by Liz AbbottJune, 2016
Advertisements 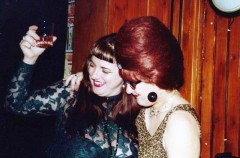 On Friday night, May 6, 2016, we lost a force of nature. After an eight-year battle with cancer, Candye Kane passed away. Candye was my long-term musical partner for most of the ’90s and was a very dear friend. She took me all over the world, taught me how to perform to my fullest, inspired me to write music, absolutely delighted me, and made me laugh. We liked a lot of the same music, despite the difference in our ages (old country, ’40s swing, blues, and more). As soon as we began performing together, at the Belly Up Tavern in 1991, the band and the San Diego audience knew something special was happening. The chemistry, with Steve Wilcox on guitar, Candye, and me on piano, was obvious immediately. We drove to SouthxSouthwest in Austin, Texas, and she landed a record deal with the legendary Antones label. It was the world after that. We started out, going to Europe, without the band, and took care of each other, learning how to deal with this new chapter in our lives. Paris became our home away from home. Our manager, Jean Herve Michel, took us to big venues with 20,000 people in the audience (Le Mans, France), but also everyplace in between, in large cities, small villages, and theaters. The French were especially wonderful; they loved Candye and still do. Candy was a phenomenal artist in any situation, but just hearing her sing unamplified, with the piano, was my favorite thing to do with her. We were amazingly close, especially when we played music, following each other seamlessly in an unthinking oneness. She was a loyal, generous, and loving friend. I will miss her very much.

Art on 30th: Creating and Marketing Art You want to Live With

Nicki Carano: A Tragic End for a Beloved Friend