August 2022
Vol. 21, No. 11
The La Jolla Playhouse: Safe Harbor for the Unsafe by Raul SandelinApril, 2015
San Diego Is (Almost) Famous Again: Cameron Crowe Brings his Movie to the Old Globe Stage by Raul SandelinApril, 2015
The End of the Line for Mad, the Magazine That Was Satirical, Silly, and Serious by Paul HomiczApril, 2015
THE HOSPICE BUBBLE and Other Devastating Affirmations: Poems by Lizzie Wann by Ted BurkeApril, 2015
You’ll Get Pie in the Sky When You Die by Yale StromApril, 2015
LENNY BRUCE: Word Blower Supremo (and the brother that you never had) by Jon KanisApril, 2015
Art on 30th: Creating and Marketing Art You want to Live With by Lorraine IversonApril, 2015
To Candye–Love, Sue by Sue PalmerApril, 2015
Nicki Carano: A Tragic End for a Beloved Friend by Liz AbbottApril, 2015
Movies About Musicians: Real and Imagined by Ted BurkeApril, 2015
Advertisements 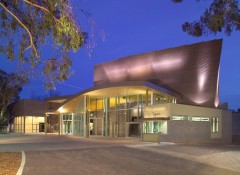 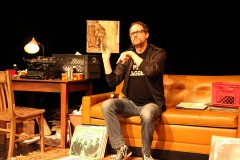 How to Be a Rock Critic, about the life of Lester Bangs, is one of the Playhouse’s recent productions.

Let the Chargers leave for Carson. Let the symphony fold. Let the San Diego Gulls skate in and out of town every 15 years. After everything else, San Diego (El Cajon specificially) will always own Lester Bangs. That’s why it was so exciting to see glimpses of Lester’s life portrayed in the La Jolla Playhouse production How to Be a Rock Critic. This play captures many Lesterisms, using Lester’s own writings to illuminate his opinions on life, music, and various rock stars who stood in his cross-hairs.

What also excited me was the fact that the La Jolla Playhouse had the gumption to stage an obscure one-man play about a semi-obscure rock music critic who died over 30 years ago.

The La Jolla Playhouse’s history goes back to the golden age of Hollywood, a time when San Diego was a nearby retreat for Hollywood’s A-list. The La Jolla Playhouse was founded by Gregory Peck (a La Jolla native), Dorothy McGuire, and Mel Ferrer in 1947. At first, it acted as Hollywood’s summer stock, a needed getaway from the grind of the L.A. studios. And, a who’s-who of actors, including James Coburn, Groucho Marx, James Mason, and Vivian Vance would come down to perform the classics in the La Jolla High School auditorium for overflow, live audiences. This first incarnation of the Playhouse lasted until 1959, and, in those 13 seasons, it staged nearly 100 productions.

Yet, the La Jolla Playhouse went fallow for almost 25 years until, in 1983, it was revived by renowned artistic director Des McAnuff. Now, the Playhouse took a more experimental bend. Under McAnuff’s direction, the La Jolla Playhouse moved into new space on the UCSD campus, space that it shared with that school’s MFA in Theatre program. Under this arrangement, UCSD used the facilities during the school year while letting the Playhouse use the facilities during the summer.

However, this was not going to be just another, traditional summer stock. According to Gabriel Greene, director of new play development, the La Jolla Playhouse became a “safe harbor of the unsafe.” From the beginning, there was an “ongoing desire to offer a wildly eclectic season.”

The idea was to “commission, develop, and produce new work,” Greene says. In the beginning, the Playhouse staged three plays per summer season, always on the lookout for young yet unknown playwrights. Over the years, many up-and-coming stars have passed through the La Jolla Playhouse, including Matthew Broderick, Billy Crystal, John Goodman, Neil Patrick Harris, Holly Hunter, Laura Innes, Jon Lovitz, Cynthia Nixon, and Gary Sinise. The Playhouse has also launched such future Broadway hits as The Who’s Tommy, How to Succeed in Business Without Really Trying, and Jersey Boys. Billy Crystal’s 700 Sundays and Doug Wright’s I Am My Own Wife went on to garner Tony Awards.

Today, the La Jolla Playhouse stages six productions per season in addition to POP Tour, a stage production that visits San Diego-area schools; the DNA series, which develops experimental projects (the Lester Bangs play was part of this series); Page to Stage, which is dedicated to bringing draft scripts to completion with audience participation; and Without Walls (WoW), a site-specific program that performs theatrical pieces in non-traditional settings such as the beach and locations on the UCSD campus. The 2014/15 season was also blessed with The Darrell Hammond Project, a one-man show written and performed by the former SNL cast member.

In addition to all of that, the Playhouse participates in the Wagner New Play Festival, held at UCSD each spring. This year’s festival runs April 14-25 and features outstanding playwrights, along with casts and crew, from UCSD’s MFA program.

The 2015/6 season, which begins in May and runs into Spring 2016, includes the following productions:
Come from Away, a musical based on town of Gander, Newfoundland and the true events that played out there when 38 planes were diverted to Gander on September 11, 2001.

Up Here, a musical comedy about recognizing your place in the universe — and maybe even finding happiness.
The Portrait of Redemption, which explores tensions both internal and external during the Civil Rights Movement of 1963.

Healing Wars, which blends dance, storytelling, and multimedia in an exploration of how soldiers and healers cope with the physical and psychological wounds of war.

Indecent, a world-premiere play with music inspired by the true events surrounding the controversial 1922 Broadway debut of God of Vengeance.

Guards at the Taj, a black comedy about two average men swept up by the beauty, carnage, and injustice surrounding of one of the most famous wonders of the world- the Taj Mahal.

The La Jolla Playhouse is located just south of Revelle College in the southwestern corner of the UCSD campus. The Playhouse complex is still anchored by the original Mandell Weiss Theatre, built in 1983, and now includes three newer theatre spaces along with on-site dining and other accouterments.

Raul Sandelin wrote, directed, and produced the music documentary A Box Full of Rocks: The El Cajon Years of Lester Bangs (2013). He has just completed another feature-film titled Ticket to Write: The Golden Age of Rock Music Journalism to be released Spring 2015.

Art Around Adams and So Much More!